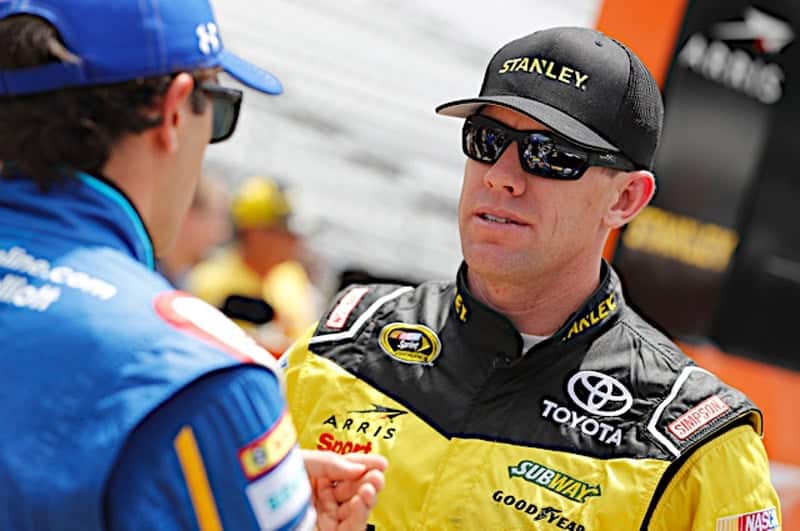 The very thing that kept Carl Edwards out of the Championship 4 in 2015 had his back Sunday at Texas Motor Speedway.

That thing, of course, was rain.

Following a five-hour weather delay to start the afternoon in Texas, the rain returned with 42 laps to go, giving race leader Carl Edwards the race victory.

Standing as his third win of 2016 and fourth at the 1.5-mile track, the win also punches his ticket into the Championship 4 at Homestead-Miami Speedway where he’ll join Jimmie Johnson and two other drivers for the title in two weeks.

“The pressure was really mounted,” Edwards said of the virtually must-win situation entering Texas. “This is what we had to do. We were in a bad spot if we went back green again. [Logano] was really good on the bottom, my car was starting to go away. But, man, that’s fun.”

Trailing Joey Logano and Martin Truex, Jr. throughout the night, Edwards first grabbed the lead with 36 laps to go following a quick pit stop by his No. 19 Joe Gibbs Racing crew.

Holding the duo off before the rain hit, Edwards says that pit stop paved the way toward career win No. 28.

“The guys got me off pit road first. That’s what won it for us,” Edwards said. “My pit crew has worked really hard this year so I can’t thank them enough.

“We have a shot at the championship, we’re going to Homestead… this is great.”

Finishing second was Logano, who led 178 of the opening 188 laps from the second starting position. Despite the dominance, the No. 22 lost the lead on pit road and never got it back, leaving Texas just one point above the cutoff zone.

“Second stinks,” Logano said. “We just lost the handle in the middle [of the race]. We had a good restart at the end and starting running down the No. 19 the last two or three laps. The rain came a little sooner than I wanted it to.”

Rounding out the top 5 is Martin Truex, Jr. and Chase Elliott, two non-Chasers, along with Kyle Busch, who overcame a couple near-wrecks and a damaged nose to come home fifth.

“That was a hard-fought top 5 for sure,” Busch said. “Being able to get the tape on the nose and fix that earlier in the race. Of course, Adam [Stevens, crew chief], just great calls being able to fix the car. it was a handful but we made it a heck of a lot better at the end.”

Despite the top-5 effort, Busch also sits just one point above the cutoff. Matt Kenseth and Denny Hamlin, who finished seventh and ninth, are only one and two points outside the cutoff entering the elimination race in Phoenix next week.

Another driver on the outside of a situation was Austin Dillon, who got turned by Kevin Harvick with 72 laps to go, turning hard into Turn 4 wall.

Winning the pole and leading six laps, Dillon’s day ended in the garage – and he was not too happy about it.

“He sucked down on my door tighter than anybody had all night,” Dillon said. “He knew how tight he was on my door, that’s why I got tight and slid up in front of him. He didn’t check up, he had the opportunity to. The silver-spoon kid was out-running him tonight.”

Harvick denied intent, apologizing for the contact after the restart.

“[Dillon] slid up in front of me, got loose and he checked up,” Harvick said. “That wasn’t anything I wanted to see. There was no intent there. I like racing Austin, I like everything they do.”

Kasey Kahne and Ryan Newman filled in the top 10 while Chaser Kurt Busch struggled to 20th, sitting 34 points outside the cutoff zone heading into Phoenix.

I wonder who Harvick will spin out next week when he needs to?