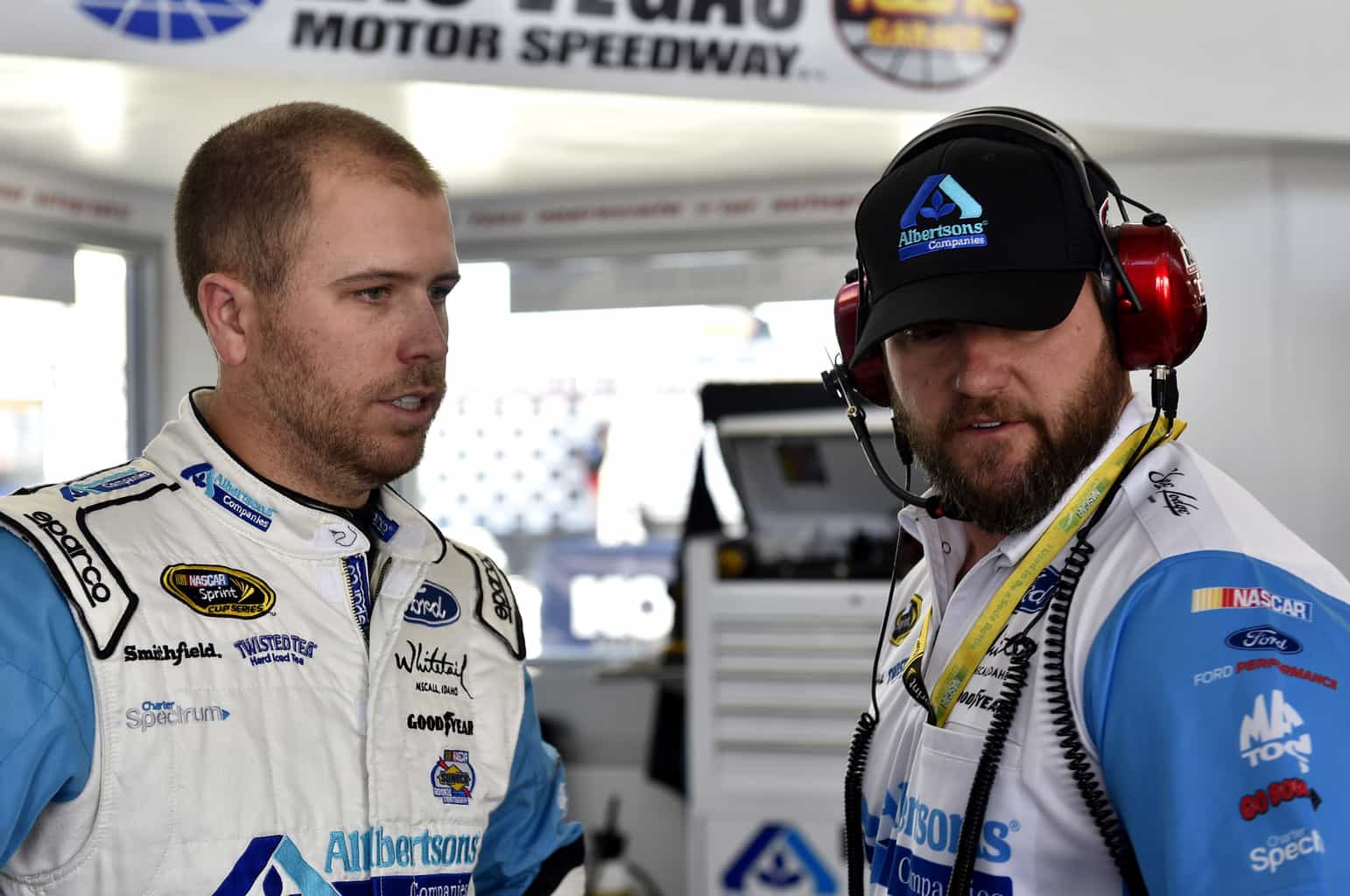 The Cup season is down to the penultimate round in the desert at Phoenix International Raceway. Chris Heroy and his No. 44 team just found out that their driver, Brian Scott, is retiring after the season so they are preparing for his final two races.

The mile track in Phoenix will challenge drivers with bright sun, harsh transitions in the corners, sand blasting the windshields and fans along with the unique dogleg on the back straight.

Heroy covers several bases this week in Tech Talk. He looks at the driver comfort handling the sunshine on the front straight and dealing with the hard tires that come with a recently repaved race track. He also talks on the “jump” in the dogleg, side skirts and their impact to the track and downforce.

Heroy wraps up with a discussion on race strategy for short races, the flat inside of the dogleg and the transition of cars from transfer haulers to main haulers to avoid a round trip from Texas to Charlotte to Phoenix.

Mike Neff – Looking back at Texas, it was an interesting race after the rain delay. Before they dropped the green flag what did you do to pass the time?

Chris Heroy – We finished up the plan for Phoenix, got a little jump start on Homestead and we watched some football too. I’m not going to lie to you.

Neff – Once they dropped the green (flag) you were on a pretty green race track. Was the first run or two a little bit hair raising from a tire wear perspective?

Heroy – It was a little more than the end of the race. The surprising thing was how tight it was. I thought, on a green track with cooler temperatures, we’d turn a little better. Based on our car and scanning other people we were all pretty tight. That was probably the biggest surprise at the beginning of the race.

Neff – In hindsight, from beginning to end, how would you rate your whole race at Texas?

Heroy – We had some speed in the car, which we really liked. We passed a lot of people but we also spun out a couple of times. We have to work on the drivability for Homestead to make it a little more controllable. Overall I thought we made gains in terms of speed for both cars. That was good. The Albertsons Ford ran pretty well.

Neff – Now we’re heading out to Phoenix International Raceway. One of the first things we think about when we head to the desert is the afternoon sun. Is that something you worry about during car prep or do you let Brian decide how he’s going to deal with the glare as the sun sets later in the day?

Heroy – We can help him out with some visors and tint in the car but we’ll kind of let him take the lead on that for what he wants and needs. It is always sunny in Phoenix so it doesn’t change the track much. The track stays pretty consistent because the tire is so hard. Typically the sun doesn’t have a huge impact on us.

Neff – Being in the middle of a desert there is a lot of sand around. No matter how hard they try to clean the track, it seems like every time the series hits the track to start a day sand is back in the mix. Is that something you have to take additional safeguards against from the electronics and engine aspects of the car?

Heroy – We will run an extra screen on the radiator to try and help it out a little bit. Typically the sand isn’t too big of an issue. It normally just bead blasts everything and at the end of the race everything needs a good coat of paint but that is about it.

Neff – You mentioned how hard the tire is there. They did a repave not too long ago. Are we using the same tire that we’ve run the last couple of years?

Heroy – Yes it is the same tire, the one we used in the spring. They get faster as you run them. Scuffs are normally a bit of an advantage. It is a typical hard tire. You put lefts on a couple of times during the race if you’re doing well and that will be about it.

Neff – Since the reconfiguration out there, the transition in the dogleg on the backstretch is different and seems to give you some more room to play with back there. Has that ability to swing the corner differently changed how you go about setting up the cars for out there?

Heroy – It is funny, the dogleg on the back has a huge jump in it. That is where we get max travel. We have to do some things to try and limit that travel to try and save some skirt for the rest of the track. That jump in the backstretch will take 3/8 to half of an inch off of your skirts. That will hurt you for the rest of the lap and cause you to lose that aero. It is a pretty unique feature. I don’t know if it was intentional but it is certainly unique.

Neff – Speaking of skirts, for the last month or two it seems like almost everyone’s side skirts are bent out pretty dramatically from where they were earlier in the season. People are saying that comes from hitting the ground early in practice. Is that something that you build into the skirts before you head into the weekend, anticipating they will be bent outwards once you hit the track for the first practice?

Heroy – You definitely want to keep enough angle on them and give them the right shape so if it hits the track it will kind of flare out. Phoenix is the place where I believe it was 2012 when Harvick hit the back really hard and the skirts flared out a bunch. They took it to the tunnel and kind of figured that one out. It is a pretty typical thing we like to do. There is a lot of downforce there so everything we can get we’ll take.

Neff – As we get down to the end of the season, and next year we have the new required foot areas for the speedway cars. Have you already got that in place for your Daytona cars or is that something you’ll work on when you come back from Homestead?

Heroy – We’re building out our speedway cars right now. They’ll have all of the intrusion plates that NASCAR has mandated. We’ve known that was coming pretty far in advance so we went ahead and got that going.

Neff – How much weight is that intrusion protection adding to the chassis?

Neff – Phoenix is a shorter race than many. Does the fact that it is a sprint instead of a marathon change how you attack the race or is it pretty much the same as any Cup race?

Heroy – Phoenix, Loudon, those shorter races you definitely don’t want to waste any time. Normally you have a couple of runs to get your car tuned in before you start making any aggressive track position moves. Phoenix, Loudon and a few others you have to go at the drop of the green flag. If you have a chance to jump on everybody by staying out, taking two or hitting a fuel window, you’re going to do it because you’re just running out of time. Even if the car isn’t driving that great, sorry buddy, suck it up. You’re staying out.

Neff – That is similar to that jump on the backstretch. You want to have some travels there but, if it is going to hurt your other corners, you have to kind of tell him he’ll have to deal with it a little more than he might want.

Heroy – Typically you’ll set the car up to help try and save that stuff but sometimes that is one of those things he’ll have to deal with.

Neff – On the back straight we often see guys diving down onto that flat inside of the dogleg. Is there any way you can prepare the car for that transition from the banking to the flat?

Heroy – That is Brian land down there. There isn’t anything I can do about that. It tears up the splitter pretty well and you definitely bottom out pretty hard on the back. Now if it is late in the race and he gets shoved down there on the restart or he feels there is an advantage down there he has my blessing to do it. That is driver’s choice right there.

Neff – When we were in Texas, during the rain delay they let the teams who wanted to come into the XFINITY garage and swap out the cars and items in their haulers. When you go to Phoenix do you do the swap in Texas? If so what do you swap out from the primary hauler to go on to Phoenix besides the cars that go out there?

Heroy – We change out the backup suspension, the brakes, any driver comfort stuff that needs to come back to be serviced. Spares, meals and eats that have been depleted on the truck. If anything is iffy off of the Texas car we’ll bring it home and go over it to make sure it is ok. It is really just fluids, brakes, rear suspension, any driver comfort stuff. The truck usually has everything. There are a few short track specific things that we have to make sure goes out in the swap over hauler with the backup and primary cars for Phoenix. All of that gets transferred over to the primary hauler and the Texas primary and backup cars go back on the trade out hauler.

Neff – So when did the Phoenix cars leave the shop?

Heroy – They left Friday before Texas. We were able to swap out on Sunday during the rain delay. I sent the backup cars home before the race started. The primaries got a late start but still got there Tuesday morning.