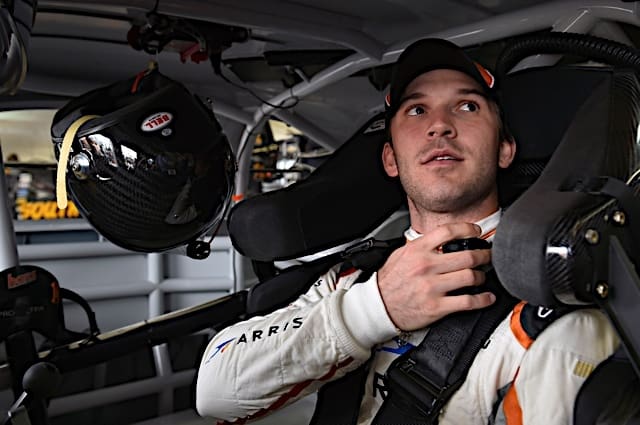 Daniel Suarez is winless no more in the NASCAR Camping World Truck Series.

After finishing runner-up four times, the part-time driver of the No. 51 Kyle Busch Motorsports Toyota snagged his first-career win Friday night at Phoenix International Raceway. Johnny Sauter, who swept the first two races in this round, finished second. Matt Crafton. Cameron Hayley and Timothy Peters rounded out the top 5.

Meanwhile, polesitter William Byron, the winningest driver in the series this season, led a race-high 112 laps but saw his water temperature rise in the closing laps. Despite reassurances from crew chief Rudy Fugle that the truck would make it to the finish, the No. 9 lost its motor with just eight laps remaining. The resulting 27th-place finish was enough to knock Byron, who many thought was a sure shot at the championship, out of the Championship 4 for Homestead.

Byron’s teammate Bell, however, did make the cut, thanks to his seventh-place result. The rookie joins a trio of veterans in Sauter, Crafton and Peters in the Championship 4.

Nine cautions slowed the field for 49 laps, and five of those yellows flew in the first half of the event, including a lap 1 incident for Myatt Snider, who made his Truck Series debut.

The Truck Series heads to Homestead-Miami Speedway next weekend to crown the 2016 champion. Coverage for the Ford EcoBoost 200 begins next Friday night at 8 p.m. ET on FOX Sports 1.

Exhibitionist’s burn-outs really make my shorts quiver! ):-P
#9 of William Byron had 6 wins this seasons & was set to win at PHO & qualify to race for the title in MIA, but blew an engine with 15 to go & gets eliminated instead. With those 6 wins, & having only finished outside the top 10 3 times in 22 races, it would seem he would have had a large points lead in the “classic” scoring/championship format that would insulate him from this DNF & enable him to keep his points lead intact. But the “chase” format now hands this potential hero a ZERO! What a pity! …& that coming from a staunch Fordie!

I get the Chase format is important for new fans who have a zero attention span to become excited by fake championship standards but the truck series and Xfin having a Chase is a joke, kind of like NASCAR is becoming. You got an 18 year old kid who dominated ALL year and is eliminated in the second last race of a season because of what? A joke of a Chase where NASCAR wants 4 guys deciding the deal in a one off race…..I am almost ready to say goodbye to my favourite sport.

I agree. This sucks. But we all know they are not in the near future getting rid of the Chase. That would be an admission of failure by the powers that be. So how can they polish this turd? No more eliminations? Big bonuses for finishing first thru fifth?