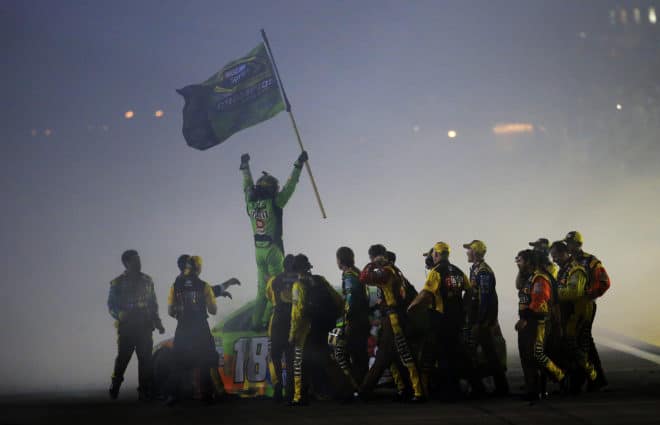 This weekend is the culmination of the long NASCAR season.  For the Cup regulars, that means 36 points-paying events in addition to two other races that are just for the joy of the sport.  For the Trucks and XFINITY characters, the season may not feature as many laps or weekends at work but that doesn’t mean that they’re not working.  One has to wonder how everyone involved in the sport keeps up the intensity.

To think that the teams, drivers, and everyone else associated with the sport all keep the machine humming as they do for such a long stretch is wild.  But it also must be draining and makes one wonder how they deal with complacency – because that may be one of the big things that is hurting the fan side of things.  There’s only 14 weekends of the year devoid of NASCAR!

More than ever, it feels that the season just runs a little bit too long.  We began before pitchers and catchers reported to spring training and the Major League Baseball season has now been over for two weeks.  While Formula 1 may still have one race to go after NASCAR wraps, they start later and enjoy almost a month break during the summer for everyone to recharge.

The reason for attacking this aspect of the sport is that often the season finales bring with them less a sense of jubilation and celebrating champions than they do a feeling of finishing a marathon, a mix of elation, relief, and exhaustion.  That doesn’t seem right.  But there isn’t any changes in the near future.

There’s no way that any tracks are willing to give up a date, and it’s likely that the current TV contract mandates that the series host the present number of events.  And besides, when has any sporting endeavor voluntarily decided to give up revenues.  Pretty sure that answer is none.

So here we are, on about to cross the finish lines.  The titles for the Trucks, XFINITY and Cup all up for grabs.  If the point of this column is to focus on the brighter side, then be sure to enjoy these final three races of the season, and let’s hope Homestead provides the kind of racing needed to make them memorable.

Happiness Is… Smoke.  On Monday night this week, NBCSN showed the 2011 season finale which featured Tony Stewart’s amazing win over Carl Edwards to cap one of the most improbable Chase runs since its inception.  Stewart’s five wins during the Chase showcased his ability while giving fans a remarkably enjoyable championship battle.  Having NBCSN re-air the race with Twitter commentary further indicated the appreciation that fans have for his win and for us all the re-live it.  (Quick aside: why don’t Fox and NBCSN do more of this?  Why aren’t old races on with more frequency?)

Since Stewart’s 2011 championship, things have mostly trended downward for the driver.  His broken leg.  The incident with Kevin Ward, Jr.  His broken back.  In far too many races he has become an afterthought, barely mentioned, barely shown and barely regarded.  That’s not how we all should remember someone with his driving acumen.  He’s a three-time champion with 49 Cup wins, a driver that evokes the term wheelman in the loftiest sense.  Let’s keep that in mind as he crosses the finish line in a Cup car for the last time.

Happiness Is… Championships.  Looking at the titles by collective numbers, there are only 12 drivers this weekend that matter.  Kidding.  There are, however, 12 drivers who have the opportunity to win a title.  From a manufacturer standpoint, Toyota looks to have the greatest odds of celebrating, with three trucks, and two cars apiece in XFINITY and Cup in contention to win.  Poor Johnny Sauter, who faces the task of being the lone Chevrolet with a shot at the Truck title.

These final races should all be good as Homestead, with its progressive banking, has shown to encourage multiple grooves, and the craziest of things…passing.  The battle in XFINITY, basically a tete-a-tete between Joe Gibbs Racing and JR Motorsports should be interesting solely for watching how the organizations handle things.  For Cup, there’s something different with an actual Ford crashing the party, and with Joey Logano holding the prospect of redeeming his early ‘Sliced Bread’ nickname.  There’s storylines abound, of course, but too many to go into here.  And that should make things fun.

Happiness Is… Optimism.  This column isn’t always the easiest to write.  Focusing on the brighter side of racing when so many of the voices are critical or harsh provides an interesting challenge.  It’s easy to focus on the negative and switch into a critical mode, finding every fault with the sport – to which we all know there are numerous.  This weekend, however, is the chance to let all that slide and just watch drivers drive fast, to enjoy the sport and all of its silliness.

There’ll be plenty of time to rip the sport in the offseason, especially as NASCAR has proven to throw out some kind of wild idea during the winter months in the past.  Hello, caution clock (which actually turned into a half-decent idea as the season progressed, though the immediate reaction came heavily scrutinized).  So enjoy saying goodbye to Smoke.  Say hello to the new champions.  And then relax for a bit and get ready for Daytona Speedweeks…they’re only two months away.  Cheers.

As an editor, Ava works through some of the site’s biggest columns while writing one of her own on F1 each week. “Stranded” on the island of Oahu in Hawaii, the aspiring college professor also helps anchor other coverage while coordinating Pace Laps, our multi-series news update.
Previous Truckin’ Thursdays: William Byron, Championship 4 Among Storylines to Watch at Homestead
Next 3-Headed Monster: Which Championship Race Will Put on the Best Show?