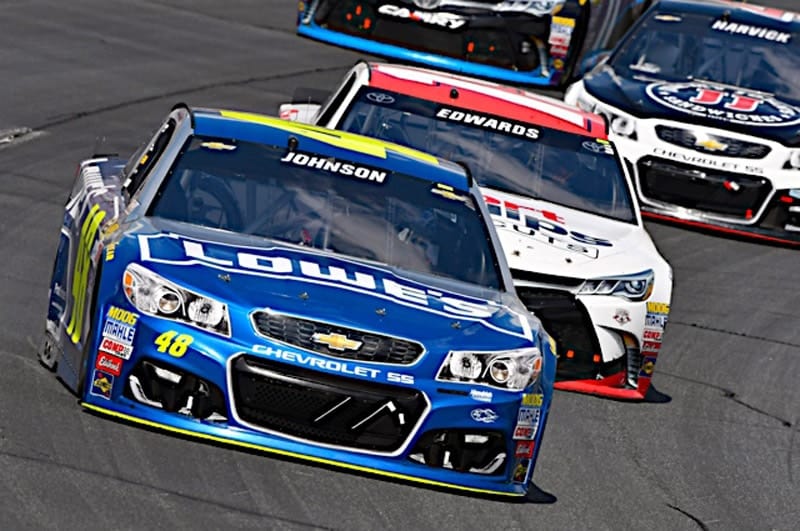 Welcome to our ninth year of staff predictions! Each week, our experts attempt to tell you who the winner of each Cup race will be. Take a look to see who your favorite writers think will win it all (or at least score some points) this week in the Ford EcoBoost 400!

Think you can out-prognosticate our staff?  Leave your picks in the comments and see how they stack up!

Each driver can be picked only twice each week.  We can’t pick the same driver two weeks in a row.  And if anyone is daring enough to pick from a pool of higher-risk drivers…well, he or she reaps some serious bonus points!

Race predictions remain the same as all year–except because of the bonus picks, we’ll up the number of times a driver can be picked for the race win from two to four.  However, we will also award one bonus point for correctly predicting the champion in each series: CWTS, XFINITY and Cup…and if you hit the trifecta, how about five EXTRA bonus points for a total of eight?! There is no limit on the number of times any driver can be picked for the title in each series. (Note: selection deadline for Trucks and XFINITY were prior to the green flag in those series.)

Amy Henderson, Senior Editor:  My pick for race winner and Cup champ is Carl Edwards.  He’s by far the best of the four hopefuls at Homestead, and while one title isn’t as glamorous as, say, seven, he’ll still be a happy camper.  As for the trucks, I’ll take Johnny Sauter; he’s hit a hot streak at exactly the right time and he’s overdue for a title.  Finally, give me Daniel Suarez in XFINITY…I think the JGR drivers have an edge over JR Motorsports in equipment and Erik Jones hasn’t been impressive in the Chase.
Dan Greene, Webmaster:  Carl Edwards for the Cup win and the championship, that 2011 loss to Smoke still has to sting. XFINITY – Elliott Sadler. Trucks – Johnny Sauter.
Tony Lumbis, Financial Manager: Carl Edwards for the race and championship. Beating Jimmie Johnson is a large task but Edwards has the equipment to do it along with five years of having to think about his loss to Stewart to serve as motivation. Erik Jones wins the XFINITY title, putting himself in position to win all three championships when he moves to Cup. Different format, familiar name: Matt Crafton puts his championship experience to use taking the CWTS title.
Jeff Wolfe, Senior Writer: Johnson for the race win and Cup title. He’s had two weeks to get ready for this race and I think he and crew chief Chad Knaus will be on top of their games. Sadler for the race win and XFINITY title. He’s a veteran who understands how to handle pressure situations. Crafton for the race win and Trucks title. Now that he’s got a shot for it, I expect him to be hard to beat.
Clayton Caldwell, Contributor: Cup winner & champ: Jimmie Johnson; XFINITY champ: Erik Jones; Truck champ: Johnny Sauter.
Sean Fesko, Staff Writer: Cup winner and champ: Kyle Busch; NXS: Erik Jones; CWTS: Matt Crafton.
Huston Ladner, Senior Editor: In Cup, it’s the Kyle and Kyle show.  Larson steals the win, Kyle Busch hoists his second championship trophy. Everyone seems to be going with one of two drivers for XFINITY, so why not do something different: Suarez grabs the headline. Trucks: Crafton.
Mark Howell, Senior Writer: In the NCWTS race, my pick is Johnny Sauter. When you’re hot, you’re hot.  In the NXS finale, I’m going with Elliott Sadler. His experience will pay off with the big trophy. In the NSCS shootout, I’m choosing Joey Logano. He showed some smoke off the hauler, but that just means there’s a fire burning.
Bryan Gable, Staff Writer: Usually, betting against Jimmie Johnson in the Chase is a bad idea, so I’ll pick him to win the race and title number seven.  In the XFINITY Series, I’ll go with Elliott Sadler.  I think his experience will finally carry him to a championship, even without his usual crew chief.  Finally, I’ll go with Johnny Sauter in the Truck Series.  Why? Momentum!
Dustin Albino, Contributor: Cup winner: Kyle Larson; Cup Champion: Jimmie Johnson; XFINITY Champion: Erik Jones; Truck Champion: Johnny Sauter.
Joseph Wolkin, Assistant Editor: Cup winner & champion: Carl Edwards; NXS: Elliott Sadler; NCWTS: Johnny Sauter.
Corey Brewer, Contributor: Martin Truex, Jr. wins, but Kyle Busch repeats as champion. In the XFINITY Series, Erik Jones takes the championship.  Johnny Sauter’s hot streak continues as he wins the Truck Series championship.

Bad Brad for the win and Cuz for the title

Dennis-the-menace (Hamlin) takes out Johnson early, then Kenseth will take out Logano. Carl clips Kyle and sends him spinning as they come to the checkered flag. Carl wins the race and title.

My prediction is it that will be an upset if by Lap 15 or 20, the “Championship 4” are all not in the Top 5. You know after yesterday, anyone not running for the title will be told in today’s drivers meeting to not become a headline (NASCAR code for get out of the way).