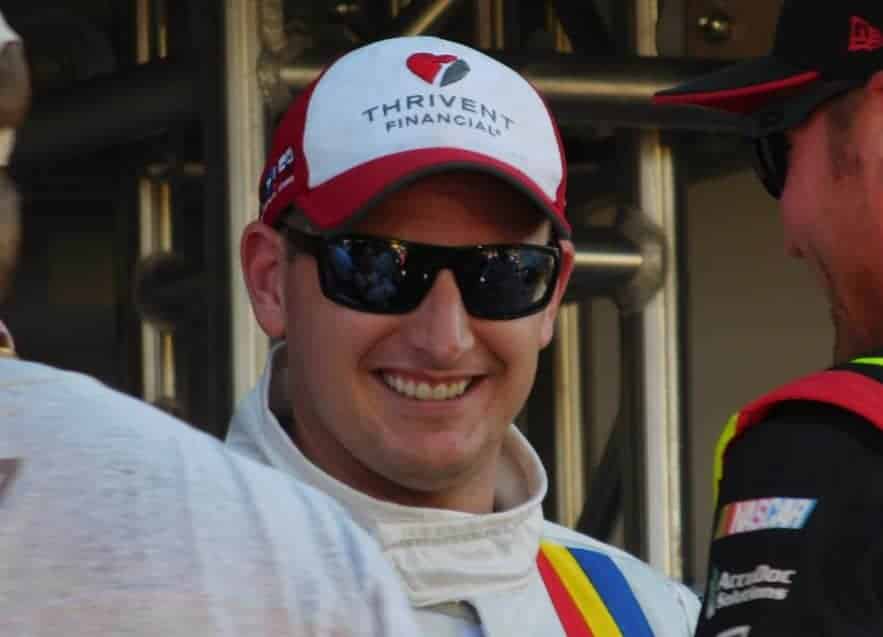 Start-and-parking, battling for sponsorship and fighting for recognition.

Following years of struggle in the Sprint Cup Series, Michael McDowell has finally been able to say the word progress, as he and the No. 95 Circle Sport Leavine Family Racing team have topped their career-best numbers in the latter half of 2016.

With things on the rise in the closing chapter of 2016, the Chevrolet team has gained a charter for 2017 and will run full-time with 31-year-old McDowell.

Frontstretch sat down with McDowell at Homestead to discuss the gains from the No. 95 camp, plans for himself and the team in 2017 and if he sees himself as a representative for underdog drivers around the country.

Zach Catanzareti: We’re here in Homestead, it’s where every season comes to an end. Coming into this race, what your thoughts on your season?

Michael McDowell: It’s been a great year for me. I’ve had a lot of career-bests this year. This program, this is the first year we’ve gone full-time so we went from a part-time team with a partial schedule to running full-time.

A lot changes, switching to Chevrolet with the alliance with RCR [Richard Childress Racing]. Its been a really good year for us. I mean, we’re not where we want to be but we’re achieving some goals that we set and we keep moving that mark up.

Catanzareti: Your performance has picked up the last few months, why is that? Is there a specific reason or is it the team gelling together?

McDowell: It’s just a lot of growing. We definitely have some newer cars and, obviously, Todd Parrott has come on in the last eight weeks.

It’s just a combination of updating our cars, everybody working hard back at the shop. Getting momentum.

Catanzareti: Your average finish is a career-best, you’re in a great point position ahead of the No. 44 car. Are you feeling more confident?

McDowell: I don’t really feel anymore confident. When your racecars are fast, it’s just easier. It makes it nice knowing, when you come to the track, that you have a car that can compete in the top 20. I feel like we’ve been able to do that every week.

The goal for next year is to move that forward – to compete in the top 15. That’s going to be a big jump again.

Catanzareti: I’ve spoken to Justin Allgaier about struggling in Cup and then going to XFINITY and battling for wins. He says the XFINITY side is more fun being up front. You’ve seen both sides of that this year alone. What are your thoughts? Are you the same?

McDowell: For me, I set my own goals in the Cup Series. To me, right now, we’re not struggling. If I was Jimmie Johnson and I was driving the No. 48 and I was running 25th every weekend, that would be a struggle.

We’re not. We’re achieving our goals. So, I think you have to manage your expectations so you’re not miserable. It is fun to run the XFINITY Series this year, be up front, challenge for wins. No doubt about that. But, for me, if I go run 19th on Sunday, that’s a win and I’m going to celebrate it as a win.

You have to set those goals as a team so that you can enjoy the journey.

Catanzareti: What’s different with Todd Parrott than Dave Winston or other crew chiefs? How is he different?

McDowell: Todd brings a lot of experience but, more than anything, he’s been at RACER. That has really helped strengthen our alliance with them, being able to get bits and pieces, knowing what updates need to happen.

Also, working on our bodies and aerodynamics and doing all the little details is really what has helped us get speed.

Catanzareti: Tommy Baldwin Racing just pulled out of full-time racing for next year. You were a part of the team at one point, what are your thoughts on that? Obviously, it’s unfortunate.

McDowell: Tommy has been at it a long time here, he’s a fighter, a survivor and has worked hard. He’s really what kept me in this sport. After 2008, I  have been shocked if I got back in another Cup car. At the end of 2009, I drove some races for Tommy and that really put me back in the sport.

Catanzareti: You are also a small team so why are you growing while someone like Baldwin never did grow and now they’re out?

McDowell: There are a lot of factors. I don’t think it’s anything that he did wrong and we did right. More, it is timing, positioning and having good partners. Thrivent, K Love, we have a good, strong team with marketing and business that we push hard at.

I think a lot of teams have been racers who have tried to race. I think we took the approach of ‘Let’s be a value to our partners and, as we become more of a value, we’ll be able to increase our performance.’

So, we did it backwards. That’s why we agreed on a limited schedule, we didn’t try to run full-time until we were ready so we could provide for our partners. Our team does a great job for that.

Catanzareti: Marketing is very big, social media, too. I spoke to Joe Gibbs about this whole thing and he went straight to social media and how online exposure is so big. Do you think that is big positive to have in the team?

McDowell: Absolutely. We do have a strong social media presence. Nealie [Stufflet, owner of Zerolight Communications] has done a great job. Thrivent has activated well in this sport and that’s really important to have partners who are engaged in social media, have good content, good photos, cool video. That makes it a lot of fun.

The world is changing. The fans are engaged digitally and it’s really important to embrace that. If you want to provide value for your partners, you have to be able to do that. Our team has fun with it, too. I think it’s authentic and that’s why people follow it.

Catanzareti: The charter is the big story within your team right now, so what is set in stone for next year?

McDowell: The charters stuff is way out of my pay-grade, I have no idea how that all looks and works. I read the press release like you all did and I know they have been working on it. But, I really have stayed out of that. To me, I’m just focused on what I need to do in the racecar to finish the season out strong.

But I’ll be back next year with LFR and we’ll continue to grow this program. Hopefully, we can continue to move the pendulum in the right direction. We’ve made good gains and we want to continue that.

Catanzareti: There are two cars this weekend, you did the same at Daytona in February. Is that something the team may be interested in for next year? Or just the one car?

McDowell: The plan next year for us is to run full-time in the No. 95 and I’ll be in it in all the races. If a second car came along, it would be only an opportunity here and there. Really, we’re just focused on getting the one car funded and sured-up enough that we can keep it at the level that we are at.

Catanzareti: You’re not the owner, but Ty Dillon has been doing well in the No. 95, so would someone like him be on board for the second car or does it just depend on availability?

McDowell: I think Ty has his plans all sorted out. I’ll let them make their own announcements. He will not be in the No. 95 next year, I know that for sure. Obviously, with our RCR alliance and our affiliation with them, he’ll be in the family. As far as I know, the No. 95 is spoken for.

Catanzareti: You’ve done more Cup racing this year than any previous season. You did a couple more in the past but that was mostly start-and-parks. How has that boosted your morale? You’ve been at the track more often and have had more time on the racetrack.

McDowell: It’s been great. It makes for those years, where I did start-and-park, pay off. It’s not something I wanted to do, but it’s something I had to do to stay in the sport, stay in it, stay sharp.

Our sport is constantly changing, these cars have evolved, the rules packages have changed. So now, to finally be making good strides, being full-time and racing all the laps, to me, it’s what I’ve always been working for.

It feels like it’s all paying off. I think the win this year in XFINITY was definitely a boost in, not just myself, but just in general – that the hard work pays off.

McDowell: What is more rewarding: Winning your first XFINITY race or building this Sprint Cup team toward more top 15s next year?

McDowell: I would say just the last 10 weeks, running consistently in the top 20 or 25 is probably more rewarding than the win. I’ve been so close in the XFINITY Series winning a race so I never doubted whether I could do it. I think I had three second-place finishes, a bunch of top 5s.

When you get in really good equipment – I know people put a lot of emphasis on the driver, but man, when you get into a good car, it’s not that hard. To run top 20 in Cup is hard, even with a good car and good teams. To do it as a small team, going against who we’re up against is really awesome.

Catanzareti: You’re in the Cup Series, the biggest stock car racing series in the world. Do you feel like you represent the underdog racers around the country?

McDowell: I’ve never thought about it like that. I don’t know, it would be interesting to find out. Being an underdog, I also pull for the underdogs, too. So, like last week with [Alex] Bowman running the no. 88 and being up front, leading all those laps. It’s awesome to see. I wish he could’ve finished it off and won the race because that’s a guy who was written off a year ago. It’s a guy who people said wasn’t going to make it or couldn’t do it.

It just shows how important the car and the team are in this sport. If you go look at his Cup stats, they’re going to a lot like mine from the last six years. Right now, he’s waving the banner for the underdogs and for us.

Then you take the opposite when you see a guy like Clint Bowyer, who went from being a championship Chase guy to being 25th to 30th every weekend. It was the exact opposite.

Our sport truly is a team effort and you must have fast cars and good people. It’s hard to do it on a small budget. And that’s why running how we ran the last few weeks has been really rewarding.