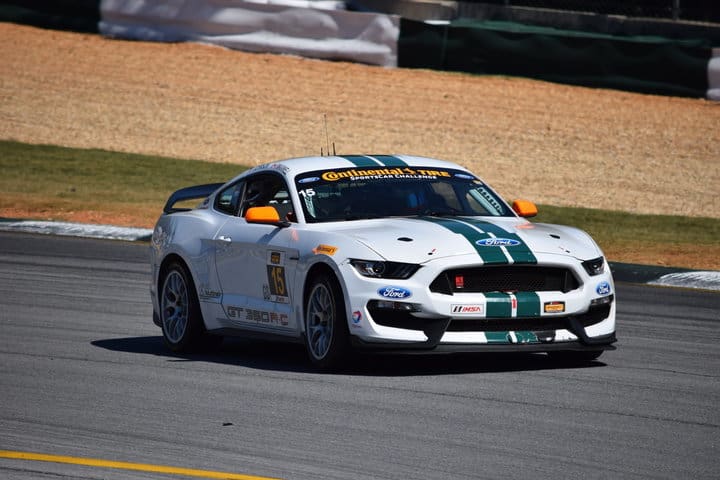 On Monday, IMSA made a couple of announcements pertaining to the IMSA Continental Tire SportsCar Challenge’s upcoming 2017 season.  Previously, the series announced that drivers that are Platnium-rated would no longer be eligible to compete in the series.  The move realistically only affects two drivers that competed in the Grand Sport class this year.  They are GS co-champion Billy Johnson and Jeroen Bleekemolen, who drove part-time for Muehlner Motorsports America.

Technical inspection, while still very important, will no longer take quite as long.  As a result of that and teams having later inspection slots available if they do not participate in promoter test days, a number of on-track days have been cut from the schedule.  Daytona is currently the only race on the schedule to have a preliminary schedule out.  On that preliminary schedule, the teams are only on-track for two days (Thursday and Friday).  For the past four years in Daytona (including this year), CTSC teams have had practice sessions on Wednesday.

As previously announced, the 2017 season will see full GT4 regulations in effect in the Grand Sport class.  However, not all GT4 cars will be eligible for the class.  Eligible cars must be from either mainstream manufacturers, or from select small volume manufacturers.  In an e-mail earlier this year, IMSA’s J.J. O’Malley told Frontstretch that cars that compete in Pirelli World Challenge’s GTS class such as the SIN R1 GT4, the KTM X-Bow GT4 and the Ginetta G55 GT4 do not meet those parameters and will not be allowed in the class.

In 2016, a couple of GT4 cars ran in the class.  Porsche had the Cayman GT4 Clubsport while Aston Martin has been racing the GT4 version of the Aston Martin Vantage for years in CTSC.  At the SEMA Show back in November, Ford unveiled a new GT4 version of the Mustang that will replace the Ford Shelby GT350R-C in the series.  Additional GT4-based entries are expected.

In addition, there will be a Manufacturer’s Championship in the series with manufacturers that choose to become Official Automotive Partners being eligible for a point fund at the end of the season.  Manufacturers that compete in the IMSA WeatherTech SportsCar Championship are automatically eligible as long as they have an eligible car.  Continental Tire SportsCar Championship-exclusive manufacturers are also eligible.  Teams racing approved cars whose manufacturer does not become an Official Automotive Partner are still eligible to race and earn points.  However, those teams would not be able to cash in from the points fund.

In addition to shorter weekends in terms of days of action, there is going to be an increase in practice time.  IMSA estimates that teams will see roughly 35 more minutes of practice per race weekend in 2017.  Some tracks may see more of an increase than others.  At Daytona, the preliminary schedule shows that teams will have five practice sessions during the weekend, including a short one just before qualifying and a 20-minute warmup on the day of the season-opening race.  This year, there was no on-track time after qualifying at Daytona.  Teams only got a few minutes of practice in the dry before having to qualify.

Big surprise aye? Fordies get screwed with less than 30 days to the first sessions of ’17 [Jan 6, CTSCC at Daytona)! WTH!???! I can certainty understand the driver’s ratings system changed, but give that a YEAR to normalize & put it into effect for ’18 for crying out loud! It is more than disappointing news to get with LESS than a month to secure a new seat! Frances LOVE putting the screws to Fords! Yet they are willing to rewrite the rule book to empower their Chevy poser children (Lil E’s unprecedented post-concussion driver testing). UNREAL …but I have come to expect partiality from this breed motorsport monopolizers.
Obtw, the ’17 Stang [GT4] is just the 350GT RC with a new name & badges. From all that I have heard, it is fundamentally unchanged. The big deal is that Ford has Multimatic building the GT4 as a “production car” that any Tom, Richard & Harry can buy & go racing with.
In other recent Ford Racing news, the Stang recently debuted in Australian [& Europe]. And Prodrive Racing Australia has been confirmed as being in the preliminary tentative stages of getting approval to replace the soon to be obsolete Ford Falcon platform with the new Stangs in the V8 Supercar series, presumably for the ’18 season, so they say. Hopefully if PRA gets V8SC’s blessings, Ford will reinvest in that program (since Ford pulled all factory support for it’s V8SC teams after the ’15 season).
And with it going to Europe also, I would not think it to much of a stretch for it to pop-up at sanctioned events in the near future there also. Especially, considering Multimatic is been very successful in it’s handling the FIA WEC arm of Chip Ganassi’s Ford GT program. But this is unsubstantiated speculation & wishful thinking on my part.

…I would not think it *NOT to much of a stretch…