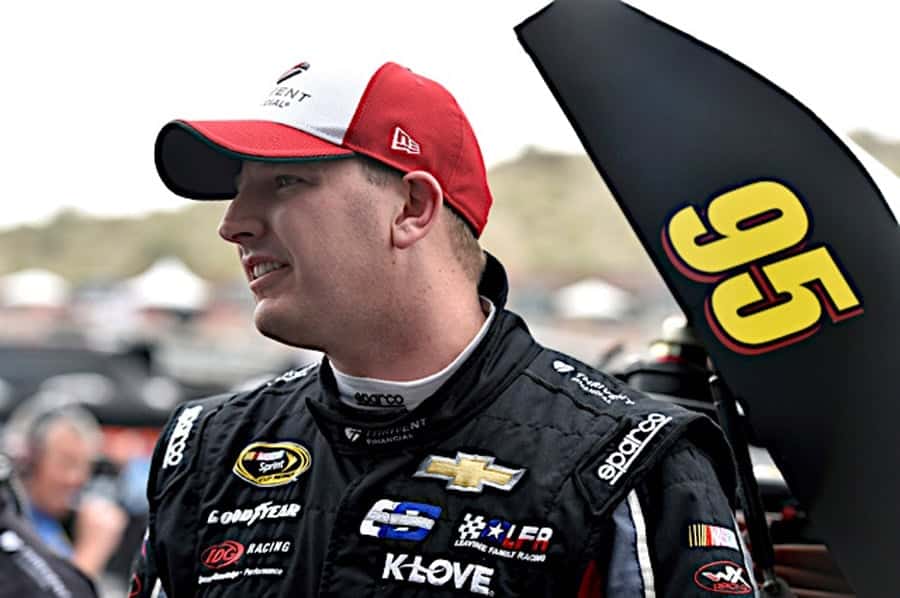 Michael McDowell gave NASCAR fans some of the year’s best underdog moments in not only the Sprint Cup Series but also the XFINITY Series.

From his top-10 efforts in Cup to a maiden XFINITY win in the summer, 2016 was a season of progress, triumph and memories for the 31-year-old.

At the 2016 Daytona 500, its merger with Circle Sport gave Leavine Family Racing its first multi-car effort in the five-year history of the organization. With McDowell piloting the No. 59 Chevrolet, Ty Dillon took the No. 95, a deal that lasted seven races in 2016. McDowell finished 15th in the team’s first attempt with more than one entry.

After things started off with a positive, the team was set to continue its first full-time season on the rise. However, the heavy competition soon took a bite, as McDowell failed to earn a top-20 finish in his next nine races. It wasn’t until Dover International Speedway in June when McDowell returned to the top half of the field, with a 20th-place finish.

That said, a return to Daytona could not have come soon enough, and the Arizona native once again showcased his knack for plate racing with a 10th at the World Center of Speed.

It was the month of July that seemed to spark a new setting for McDowell and the No. 95 team. At the halfway point of the campaign, with only three top 20s to his name up to then, McDowell ripped off back-to-back finishes of 17th and 19th at Watkins Glen International and Bristol Motor Speedway before entering what would turn out to be the biggest weekend of his NASCAR career.

Richard Childress Racing announced in June that the road racer would return to the XFINITY Series at Road America in the team’s highly competitive No. 2 Chevrolet after a nearly two-year hiatus from the secondary series. And in the race itself, McDowell put the car on the front row before taking the race lead on lap 24 from Alex Tagliani.

From that point forward, teammate Brendan Gaughan emerged as McDowell’s fiercest threat between second place and a first win. The two circuit aces put on quite the show, but it was McDowell’s day of reckoning, as he beat Gaughan to the strip to take the checkered flag in Elkhart Lake.

The momentum for McDowell proved to drag over to Cup two weeks later, as he earned a 12th-place result at Richmond International Raceway. It was best non-plate finish through hundreds of races for both the team and McDowell.

Despite the achievement, the team shook up its head of command, replacing crew chief Dave Winston with Todd Parrott, the 1999 championship crew chief who has ties to RCR. With CSLFR having an alliance with RCR in 2016, the move was almost natural, said McDowell.

“Todd brings a lot of experience,” McDowell told Frontstretch. “But more than anything, he’s been at RCR. That has really helped strengthen our alliance with them.”

It proved to be more than just words on paper, as the duo grabbed a 14th in its first race together at Charlotte Motor Speedway. With a 22nd the following week at Kansas Speedway, it was back-to-back runs of 16th and 18th that set McDowell up for career numbers to end the year.

Amid the positive runs and boosted egos, McDowell also encountered one of his oddest runs of luck after suffering three blown tires in the closing laps of crucial races in the Chase for the Sprint Cup. And after causing the race’s final yellow at the Chase kickoff at Chicagoland Speedway, the same occurred the next week at New Hampshire Motor Speedway.

As though two times weren’t enough, the elimination race at Phoenix International Speedway seemed to be in race leader Matt Kenseth‘s hands before another left-rear tire exploded on McDowell’s Chevrolet, significantly impacting the championship picture in the ensuing restart when Chaser Kenseth was spun by Alex Bowman.

On Twitter, McDowell stated his disappointment for affecting the championship picture.

Not the day we wanted with our @onsemi @Malwarebytes @CSLFR95. Nothing we can do about a blown tire but hate to be apart of the Chase story.

With all the frustration behind him, it was time to prep for the season finale at Homestead-Miami Speedway. Like the Daytona 500 in February, CSLFR would put Dillon in the No. 95 and roll out the No. 59 for McDowell, hoping to have similar success this time around.

It turned out to be a career night. After starting 26th, McDowell earned his best average running position of any non-plate race of the season (18th), cracking the top 15 throughout the night.

When Carl Edwards crashed violently into turn 1 late, McDowell came out unscathed while teammate Dillon was swallowed up in the holy mess. Then, restarting eighth on the first attempt of overtime, McDowell held off the likes of Chase Elliott and Kurt Busch to close the year out with a first non-plate top 10 for both himself and CSLFR.

Though he doesn’t see himself as one who represents the underdogs in racing, it wont take much exploring to counter that argument after 2016. McDowell earned career-high numbers in nearly every category, including most top 10s (two), most laps completed (8,965), best average finish (24.5), best points finish (30th) and most lead-lap finishes in a single season (11).

Following a 2015 season that saw both fire and rain belittle the organization, it moved forward. While small teams like HScott Motorsports and Tommy Baldwin Racing will not return in NASCAR competition in 2017, McDowell and his team will continue forward with a full-time effort next season.

It may be tough to find something that will slow this race team down.