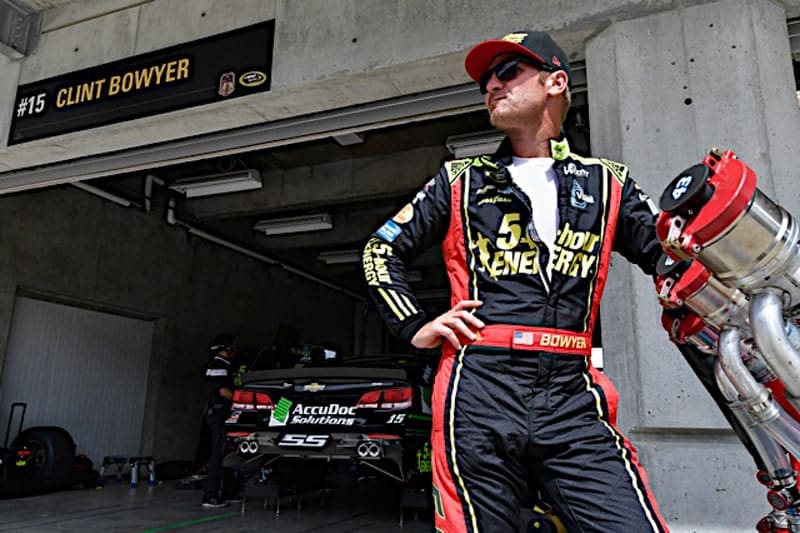 Perhaps no driver in NASCAR was happier for Homestead to come than Clint Bowyer.

It was a pretty dire season for Bowyer in 2016. After jumping from the sinking ship that was Michael Waltrip Racing at the end of 2015, Bowyer landed a pretty good gig- replacing a retiring Tony Stewart at Stewart-Haas Racing. There was a catch, however: Bowyer would have to wait until 2017 to get the keys to the No. 14 car.

After a fishing trip with Harry Scott, Jr., Bowyer was tabbed to be in Scott’s No. 15 car in 2016. HScott Motorsports was an up-and-coming race team, having just expanded to two teams the year prior. Justin Allgaier had finished 30th in points in 2015 in the same car Bowyer would be running in 2016. The hope for Bowyer fans was that Bowyer could elevate the team and maybe even compete for a spot in the 2016 Chase.

Was Bowyer able to do so? Well… No.

2016 was far and away the worst season of Bowyer’s career. He finished 27th in points and posted career lows in just about every statistical category. Both HScott cars improved from 2015, but not at the rate one would expect after signing a championship-contending driver like Bowyer.

Bowyer’s greatest rival this season was not any one driver, it was his equipment. This season was more or less defined by Bowyer in April when Motorsport.com quoted him as saying “I’ve never been with such a (expletive) unprepared (expletive) team in my life. It’s a (expletive) joke. No power steering. (Expletive) put this in the truck and go home,” during an April practice at Richmond. Bowyer also revealed to Motorsport.com that month that the HScott team only had one engineer, compared to 28 at MWR.

To add insult to injury, Bowyer had to file a lawsuit following the season because HScott owed him $2.2 million (The lawsuit has since been settled).  Bowyer kept the car clean for most of the year, rarely over driving or finding trouble, but the team’s performance was just lacking all year long.

There were a few highlights, however. Bowyer finished seventh and ninth at Talladega and Daytona respectively. Bowyer also had a good run at the spring Bristol race, finishing a solid eighth.

HScott Motorsports recently announced that they would not be returning to NASCAR in 2017 and have sold away their charter. The team stands as an example of when a team tries to expand too much, too fast. Instead of continuing to grow their program with Allgaier, they threw a hail mary and hoped that Bowyer would elevate the team on driving talent alone, to a point where they could simply bring another star driver in for 2017. It did not work out.

Bowyer’s 2016 was like a kid getting a flu shot: he’s was going to scream and yell, but it had to be done. This was the second straight season Bowyer’s team he drove for died over the off-season. Bowyer is still talented- even with MWR’s impending doom in 2015, Bowyer drove his way into the Chase. But he hasn’t won since 2012 and he needs to find some consistency in his team, to not feel like he’s the only light on in a dark tunnel. Stewart-Haas Racing should be just what the doctor ordered for him in 2017.

Let see, Clint Bowyer NASCAR career highlights. Involved in illegal scheme to influence chase competitors which probably played a major role in the demise of MWR. I think Mr. Kaufman was suitable embarrassed and as a business man could not support that effort any longer.

Spent the 2016 season collecting a check for racing with Danica and probably played a major role in shuttering H Scott.