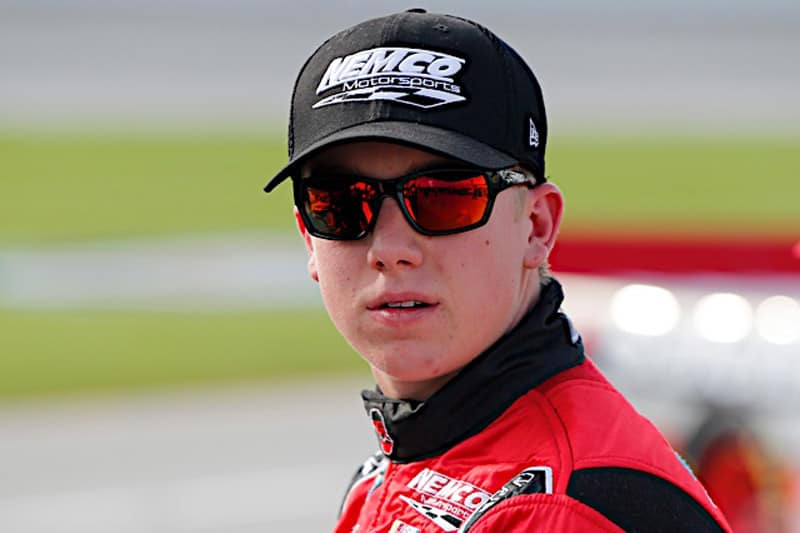 John Hunter Nemechek entered 2016 with 30 NASCAR Camping World Truck Series starts on his resume. However, this past season marked the first time the North Carolina native raced for a championship, competing full-time for his family-owned NEMCO Motorsports team.

The 19-year-old locked himself into the division’s inaguaral Chase almost immediately, winning at Atlanta Motor Speedway during the second race of the year. With another victory at Canadian Tire Motorsport Park — a controversial win that saw him fight Cole Custer on the frontstretch after the checkered flag waved — he entered the Chase with plenty of confidence.

Nemechek ended up finishing the season 11th in the standings after getting knocked out of the Chase following the Round of 12. But with back-to-back runner-up finishes to conclude the year, he is pumped up for 2017.

Nemechek spoke with Frontstretch at Homestead-Miami Speedway, discussing his 2016 season, what it means to work with his father and more.

Joseph Wolkin, Frontstretch.com: How would you evaluate your 2016 season?

John Hunter Nemechek: I’d say we had a pretty good year, having two wins and a pole. We’ve run consistently well each and every week. We’ve had some not so good runs. We’ve tried some new things, and some of it didn’t work. I’d say overall, it’s been a great year overall, having the two wins. The goal was to be running for a championship at the end of the season.

Wolkin: You had those two wins, with the first coming in the second race of the year at Atlanta. How did that change your strategy when you go from track-to-track?

Nemechek: I don’t think it really changes your strategy much at all. You might be able to try some new set-up things when you go to the racetrack. You’re going there each and every week to win races, so maybe some of the stuff you do set-up wise or truck wise since we don’t have tests could help you being able to win early and knowing you are locked in.

Wolkin: You went a few races without sponsors, but closed the year out with funding for the final eight races. How difficult has it been from a marketing standpoint for you and this team?

Nemechek: It has definitely been difficult to find sponsorship out there, but we’ve had some great partners this year, with Fire Alarm Services coming on board and Death Wish Coffee. We’re very thankful for every one of our partners this year. We hope to continue those relationships, as well as grow with more partnerships in the future as well.

Wolkin: Fire Alarm Services stepped up to sponsor the last seven events for you guys. What has it been like to work with them to help expand your program?

Nemechek: They’re a great group of people and I really love being with them at a racetrack. We still don’t have a win with them, though, so we need to get that done.

Wolkin: What is the biggest struggle in the search to find sponsors?

Nemechek: There’s not just one struggle. I think every team out there is trying to find sponsors throughout the year. It is just how much it costs to do it. It’s hard to find companies that are willing to find that kind of sponsorship dollars up. There are some out there that believe in drivers like me and our team. We’re really thankful when they come forward.

Wolkin: How do you pitch yourself to sponsors to convince them to sponsor you over one of your peers, who are in the same demographic and have similar levels of success?

Nemechek: It’s all about performance. It’s a performance-driven sport. You have to work very hard at everything you do, and eventually, all of that hard work will pay off.

Wolkin: What has the experience of competing full-time in the Truck Series been like for you this year?

Nemechek: I don’t think it has been that big of a change. But I think it has helped our team get better on the communication side, knowing what our truck wants each week. It has definitely helped us on that front, knowing what we need when we get to the racetrack and making our trucks better each and every week. Just being in the truck every week helps me as a driver to grow and learn.

Wolkin: Do you miss seeing your dad race at all besides the few XFINITY Series races he runs?

Nemechek: I guess sometimes (laughs). But now it’s my turn. He’s been there and done that. It’s good to still have him around the racetrack, and have his help and support. He’s pretty much done everything to help get me where I am right now.

Wolkin: You’re done with school now. What is life like for you now that you’re racing 23 weeks out of the year?

Wolkin: How has racing for the family-run team helped you develop a better relationship with your dad?

Nemechek: I’d say it’s helped us become a little bit closer just from being at the racetrack with each other when I was racing. He was always racing somewhere else when I was racing. We never got the opportunity to race with each other. I started racing in the NASCAR circuit and he was able to be around. It’s pretty cool to have him around a boss, mentor and as a dad. He’s all three in one.

Nemechek: The goal is to keep moving up the ranks and be in the Cup Series one day. Who knows how long it will take. We have to take every opportunity as it comes along. I don’t know what I’ll be doing yet.

Wolkin: What are your plans for the off-season?

Nemechek: Well, we’re going to run the Snowball Derby. We’re going to have some fun in the Late Model. I’ll probably in the shop most of the time, getting our stuff ready for 2017.