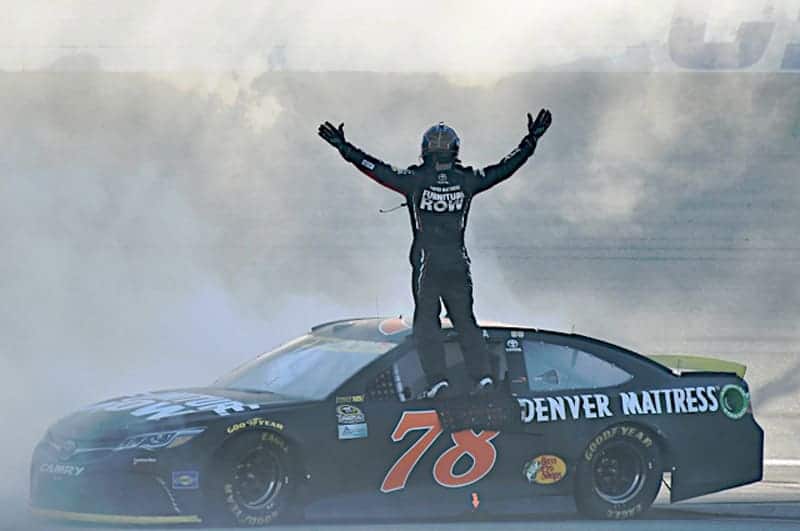 Martin Truex, Jr. and Furniture Row Racing entered 2016 with a new look.  The Denver, Colorado-based operation entered into a technical alliance with Joe Gibbs Racing, prompting a manufacturer switch from Chevrolet to Toyota.  Truex and FRR were coming off a successful 2015 campaign in which both the driver and team looked reborn.  The partnership with JGR suggested that the team could reach even greater heights.

When the 2016 season began, however, no one was sure that Truex and Furniture Row could avoid some short-term growing pains.  Would the switch to Toyota cost the No. 78 team its intermediate track speed?  Truex answered that question with a resounding “no.”  Furniture Row retained every bit of its intermediate track speed, and probably added some more.  Truex led 1,809 laps over the course of the year, more than anyone else.  He also raced to four victories, including two in the Chase.  It was the first multi-win season of Truex’s career, and FRR tripled its total number of Premier Series wins.

Truex’s victories in the regular season were big ones.  The first came in the Coca-Cola 600 at Charlotte Motor Speedway.  Truex put on one of the most dominant performances in NASCAR history, leading 392 of 400 laps.  Nobody could touch the No. 78 during the race’s long green flag runs, allowing Truex to score an emotional victory in NASCAR’s longest race.

Truex was much less dominant at Darlington Raceway, but he was still able to earn his second win of the season.  Taking the lead for the first time on lap 339 of 367, Truex was the driver to beat for the rest of the night.  He held off a hard-charging Kevin Harvick in the closing laps to secure his first win in the Southern 500.

Perhaps it was fitting that Truex won at Darlington by taking control of the race late.  Furniture Row Racing could have had several more wins by the time the Chase began, but a combination of errors and just plain bad luck often knocked the No. 78 out of contention when Truex otherwise had the dominant car.

At Texas in April, Truex led 141 laps but stayed on track during a few late caution periods.  Other drivers behind him pitted for new tires, including Kyle Busch.  Busch flew past Truex on the final restart and drove to victory, while the no. 78 faded to sixth on old tires.

Things got even worse for Truex at Kansas the next month.  After giving up the lead to make a green flag pit stop, Truex reported that he was feeling a vibration in the car.  The No. 78 crew had left a wheel loose, forcing Truex to return to pit road.  He led 172 laps in that race but lost too much ground to the leaders after making the extra pit stop.  Truex would finish 14th.

The next week at Dover, Truex was leading with 58 laps to go when a caution came out.  Truex pitted for four fresh tires.  As he was exiting pit road, Truex eased off the gas, allowing Carl Edwards to pass him.  The No. 78 left pit road in fourth, meaning that Truex could restart in the advantageous outside line.  Yet when the green flag dropped, Jimmie Johnson struggled to get rolling.  Truex was directly behind Johnson and had nowhere to go, other than right into the back of Johnson.  The No. 48 spun in front of the field and set off a multi-car wreck.  Truex got collected in the accident and had to make multiple pit stops to get his car fixed.  Although he rallied to finish ninth, the race was another lost opportunity for Furniture Row Racing.

All that said, the most gut-wrenching loss of the regular season for Truex had to come in the Daytona 500.  After spending the day drafting with his pseudo-teammates at JGR, Truex had an opportunity to snatch the victory on the last lap.  He briefly nosed ahead of Denny Hamlin coming to the checkered flag, but a last-gasp surge from Hamlin put the No. 11 ahead of the No. 78 by inches at the finish line.  NASCAR measured the margin of victory at .010 seconds, the closest in Daytona 500 history.  Unfortunately for Truex, he was on the losing end.

Despite the frustrations of 2016, the No. 78 team had good reason to believe that it could compete for the championship.  Truex got off to a fantastic start in the Chase by winning at Chicagoland Speedway.  A late-race caution gave Truex an opportunity to pit for fresh tires.  While a handful of drivers stayed on track, Truex was the first competitor off pit road.  On the overtime restart, Truex blasted past the drivers on old tires and sped to victory, guaranteeing his passage to the second round of the Chase.  Two weeks later, Truex picked up another win at Dover.  Going into the Round of 12, Truex looked like he was on his way to a second-straight appearance in the championship round, if not his first title.

Yet as was typical of Truex’s 2016 season, his fortunes quickly changed.  After lackluster performances at Charlotte and Kansas, Truex found himself 13 points above the Chase cutoff going into the final Round of 12 race at Talladega Superspeedway.  That is where disaster struck.  Truex qualified on the pole and looked strong early, only to blow an engine 42 laps into the race.  Most of the other Chasers avoided trouble, creating a worst-case scenario for Truex, who finished last and did not earn enough points to advance.  In three weeks, the No. 78 had gone from possible championship favorite to eliminated from the Chase.  A pair of crashes at Phoenix and Homestead only made for a more bitter ending to the year.

While it ended on a down note, 2016 was Truex’s best season.  He did have only 17 top 10s compared with last year’s 22, and his average finish of 13.9 was a bit worse than the previous season’s 12.2.  Nevertheless, Truex’s four wins, including the Coca-Cola 600 and Southern 500, displayed a level of dominance that both he and Furniture Row have never shown before.

For 2017, FRR will expand to a two-car operation, bringing aboard rookie Erik Jones.  There will no doubt be questions about whether or not the team can maintain its speed amidst so many offseason changes.  Truex faced those same doubts last year, and he responded with flying colors.  If Furniture Row can work on improving its pit stops and closing out races, Truex will be tough to beat once again.