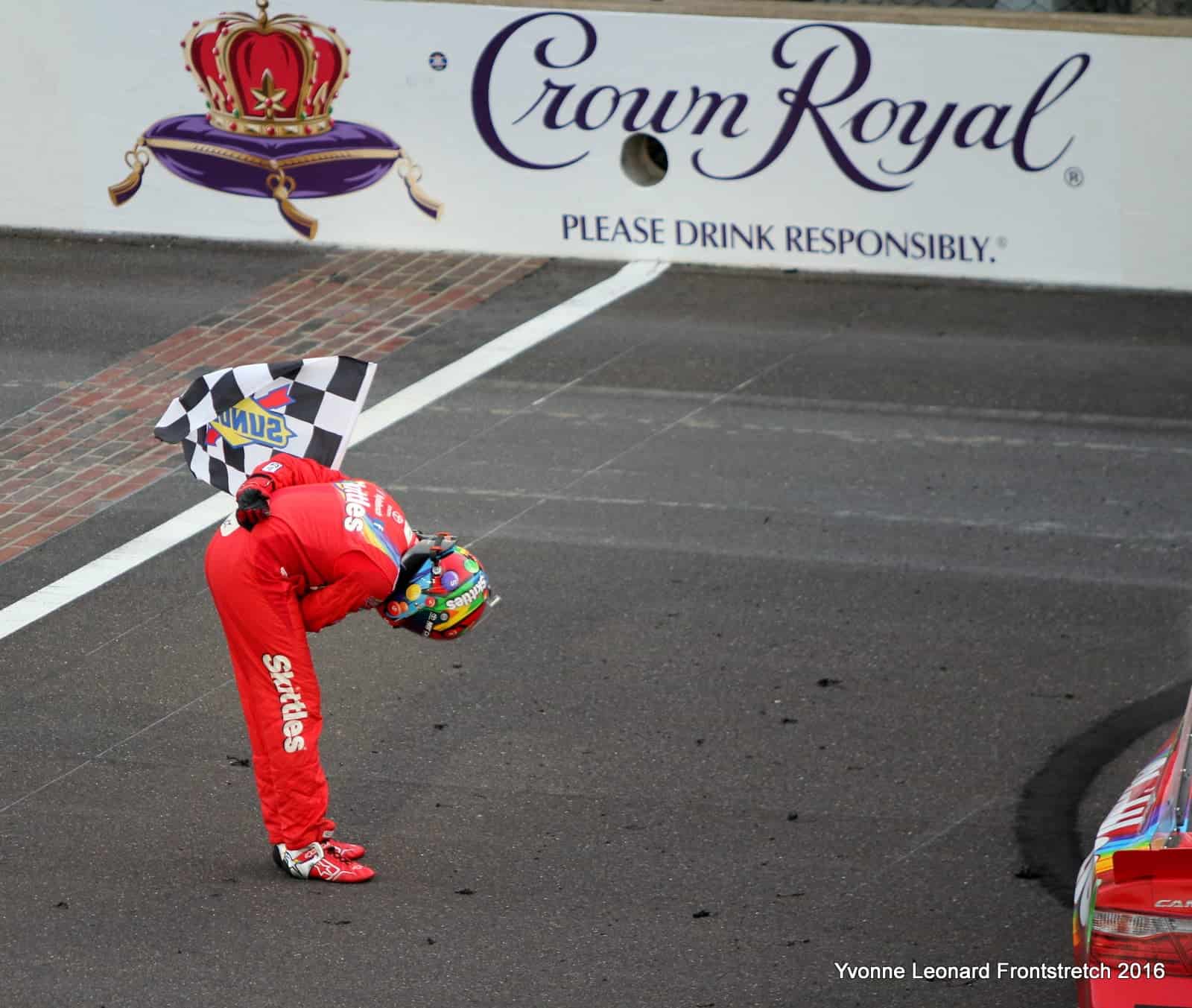 When Kyle Busch exited his car after finishing sixth in the finale at Homestead, he came across as a bitter, disappointed driver.  With Jimmie Johnson taking the race, and the championship title that Busch had, held, there was little solace to be found for Busch.

Perhaps no driver overtly exemplifies the mantra of “if you ain’t first, you’re last” by Ricky Bobby, from the film Talladega Nights,  as does Busch.  His emotional approach to racing may be both what drives him but is also a source of frustration.  Sure, losing the championship had to sting, and by the time Busch made his way to the NASCAR awards ceremony in Las Vegas he had begun to see the season from a different perspective.

Viewed in its entirety, Busch’s season rivaled anyone who didn’t claim the championship trophy.  His four wins sat atop the leaderboard prior to Homestead, while he also earned 17 top fives, and 25 top tens – hardly a season to sneer at.

His first win of the season was also his first win at Martinsville.  Having earned the big clock trophy, Busch followed the win with another as he then won again a couple of weeks later at Texas.  Continuing a strong Spring, Busch then out ran his demons at Kansas and claimed his first Kansas victory.  With Martinsville and Kansas checked off the to-do list, Busch now has Pocono and Charlotte left as the tracks where he’s never won.

Following the Kansas race, Busch and his No. 18 team seemed to lose their way on endured a mid-season swoon, finishing 30th, 33rd, 31st, and 40th.  These four races brought about questions as to whether not not Busch would really be a contender, as the 33rd and 40th place finishes came at Charlotte and Michigan, respectively, two tracks that showcase high-speed oval driving.

He snapped out of his at Sonoma, taking seventh, and proceeded to return to form.  The highlight for his summer stretch came at Indianapolis.  He made a mockery of the XFINITY field the day before the Brickyard 400 and proceeded to do a similar thing to the Cup field, leading 149 of the 170 laps and winning his second straight Indy trophy.

Locked into the Chase, Busch and his team opened it by taking the pole at Chicago and crossing the finish line in eighth.  Finishes in the top six over the next four races kept Busch in contention and set him up to tackle Talladega in a rather worry-free state, as evidenced by his tactic of riding around in the back and being pleased with a 30th place result.

Consecutive fifth-place finishes seemed to put Busch in a solid position to make the championship four at Homestead, but it didn’t.  Jimmie Johnson won at Martinsville and Carl Edwards took Texas, locking them in, while the rest battled it out for the final two spots.

For much of the Phoenix race, the last one before the finale, it looked as though Busch would fail to defend his title.  Had it not been for a late restart, that would have been the case; instead, Busch used an aggressive maneuver to go low and gain position on Alex Bowman, and in doing so caused Bowman to tag Matt Kenseth, sending Kenseth out of championship contention.  Though Joey Logano claimed the win at Phoenix, taking second moved Busch to Homestead with a chance.

Though never the factor he was at the 2015 championship race, the 2016 season proved to be a strong and rewarding one for Busch.  He led Joe Gibbs Racing with his four wins and 11.5 finishing position, while also finishing highest in the final standings of his group.

The stories that surround Kyle Busch tend to focus on his attitude, temper, hotheadedness, or whatever you may want to call it.  In addition, his participation in the XFNINTY Series continued to bring fan frustration, something to which NASCAR responded by limiting the number of races for Cup drivers. Certainly the way that Busch has carried himself in conjunction with his personality has garnered much of the headlines and fan reaction that surrounds him, but along the way he’s continued to show that he’s an amazing driver.  He is now tied for 17th on the all-time wins list with 38, and when the season begins will be the second-most active winning driver.

As Busch never seems to stray too far from racing in the offseason, often racing the Snowball Derby, he has instead accepted the opportunity to drive in the Race of Champions, to be held in Miami.  The event features drivers from all disciplines on a short course inside a stadium and should be interesting entertainment as he’ll be teamed with his brother, Kurt.

From an outsider’s perspective, Busch’s 2016 season was an excellent effort that came up just short, but from Busch’s viewpoint, it was a bummer, which is probably all the motivation he needs for 2017.

As an editor, Ava works through some of the site’s biggest columns while writing one of her own on F1 each week. “Stranded” on the island of Oahu in Hawaii, the aspiring college professor also helps anchor other coverage while coordinating Pace Laps, our multi-series news update.