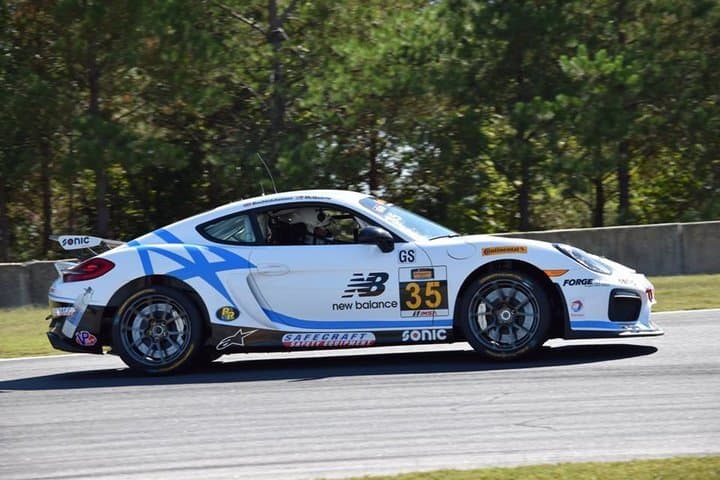 When IMSA released the provisional entry list for this weekend’s Roar Before the 24, CJ Wilson Racing’s Porsche Cayman GT4 Clubsports were missing from the chart.  Their plans for 2017 had not been publicly announced at that time.

On Tuesday, the Texas-based announced that they will once again field two Porsches in the Grand Sport class, but both cars will run the full season.  Last year, the No. 35 (pictured above) ran part-time.  Marc Miller will return to the No. 33 Cayman, nicknamed “Darth Cayman” last season.  He’ll be joined by Till Bechtolsheimer, who ran part-time in the No. 35.

The No. 35 will have an all-new lineup for 2017.  Irishman Damien Faulkner will drive full-time with rookie Russell Ward.  Russell’s father, Bryce Ward, will be a third driver for the team in the two four-hour endurance races at Daytona and Mazda Raceway Laguna Seca.  Both of the Wards will be making their CTSC debuts in Daytona.  Sponsorship will be provided by Techemet, a Texas-based company that recovers minerals such as palladium, gold, silver, platinum and rhodium from products such as catalytic converters.  Bryce Ward is the Vice President of Techemet.

Faulkner is a veteran sports car racer, but has only one career start in the Continental Tire SportsCar Challenge.  That was a fourth-place finish at Lime Rock Park back in 2013 in the final race that the series was sanctioned by Grand-AM.

Faulkner is very pleased to get back to racing in IMSA.

“I’m delighted to get this opportunity with Winward & CJ Wilson Racing,” Faulkner stated in a press release.  “The [IMSA] Continental Tire SportsCar Challenge is a series I have followed closely and I’m looking forward to competing at the sharp end of the field alongside my new teammate, Russell [Ward]. I can’t say enough about him, he already has a lot of speed and he has the potential to really excel in 2017.”

Faulkner’s most recent IMSA start saw him race in last year’s Rolex 24 at Daytona for Riley Motorsports in their No. 93 Dodge Viper GT3-R.  Faulkner finished third in class in a Texas-themed car that he shared with team owner Ben Keating, Trans-Am racer Gar Robinson, and CTSC teammates Jeff Mosing and Eric Foss.  Prior to that, Faulkner raced full-time for GB Autosport in the IMSA WeatherTech SportsCar Championship’s GT Daytona class in 2014.  Faulkner finished 17th in points with a best finish of fourth at Canadian Tire Motorsports Park.  After the first two races of 2015, GB Autosport pulled out of the series.

The five nominated drivers for CJ Wilson Racing will each get some track time this weekend as part of the Roar Before the 24 at Daytona International Speedway.  Testing sessions begin on Friday.