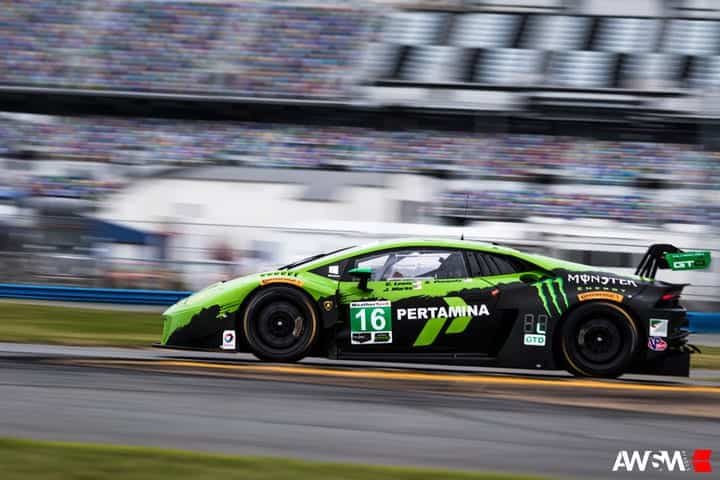 On Thursday morning, the Robby Benton-owned Change Racing organization announced their 2017 plans for the IMSA WeatherTech SportsCar Championship.  The team will once again compete full-time in the GT Daytona class with their Lamborghini Huracan GT3 (last year’s car is pictured above), but there will be some changes.

In the driver’s seat for the full season will once again be Corey Lewis.  However, instead of veteran Spencer Pumpelly, Lewis will be joined by Jeroen Mul, a 26-year old racer out of Holland who will be making his IMSA WeatherTech SportsCar Championship debut in Daytona.

The team is maintaining their previous sponsorships from Monster Energy, Orion Lighting and PERTAMINA, an Indonesian oil company.  To that, a new partnership with Microsoft will see Change Racing’s No. 16 Lamborghini carry the branding of Forza Motorsport.  In addition to traditional sponsorship activation at the track, the No. 16 Lamborghini will be available to download for use in Forza Motorsport 6 for the Xbox One.

Benton is very happy with the direction that Change Racing is headed.

“This has been a busy offseason for us, but incredibly productive,” Benton said in a statement.  “We are very fortunate to grow our partnership with Microsoft and to be representing the Forza Motorsport brand.  This will not only give us an incredible global reach, but it will add a lot of value for our existing partnerships (Monster Energy, Orion Lighting and Lamborghini Carolinas) and hopefully help continue to grow the worldwide audience for IMSA.

For the endurance races, the team is bringing in one new driver and one returning driver.  Returning to the team’s Lamborghini for Daytona only is Camping World Truck Series regular Kaz Grala.  Grala was part of the team’s driver lineup in last year’s Rolex 24 at Daytona and ran quite well.  It was only after Justin Marks collided with the Paul Miller Racing Lamborghini while racing for the GT Daytona class lead that the run began to fall apart.

Sandberg more or pre-empted the announcement by announcing his own participation with the team on Twitter back in December.

As for Pumpelly, it appears that this move blindsided him, especially since the news apparently came down just two days before he thought he was going to be in the car.

Disappointed to not be back with @Change_Racing but I enjoyed my season with them and wish them the best in 2017.

For now, Pumpelly is without a ride for the Rolex 24 at Daytona and is currently in Daytona Beach, making the rounds with teams at this weekend’s Roar Before the 24 test in order to find a ride.