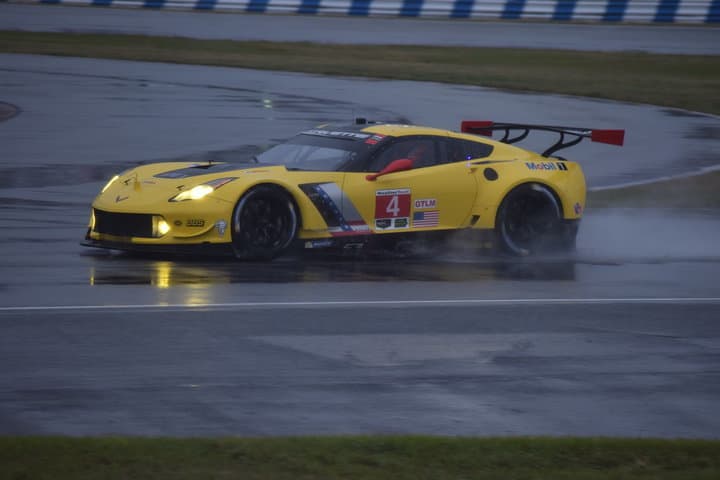 Saturday morning dawned quite chilly in Daytona Beach.  Temperatures hovered around 35 degrees when teams arrived at the track for the third and final day of the Roar Before the 24.  Some teams chose to do the bare minimum, thinking that they couldn’t learn all that much in the cold weather.  Others put themselves out there anyway.

The cold weather brought on the fastest laps of the entire weekend for the prototypes.  For the first time in the dry, someone managed to beat REBELLION Racing.  That team was DragonSpeed.  Ben Hanley turned in the fastest lap of the whole weekend with a lap of 98.343 seconds (130.319 mph).  This lap was nearly a quarter of a second faster than the quickest lap during the entire Rolex 24 at Daytona weekend.  That lap was set by Katherine Legge in the DeltaWing.

Despite Hanley’s pace, he was only two-hundredths of a second faster than Mazda Motorsports’ Jonathan Bomarito in the No. 55 Mazda RT24-P.  REBELLION Racing’s Stephané Sarrazin was third, two-tenths of a second off.  René Rast was fourth quickest for Visit Florida Racing, while Action Express Racing’s Mike Conway was fifth.

BMW Team RLL made their first appearance in the top 5 all weekend when John Edwards put the No. 24 BMW M6 GTLM third in the session.  Risi Competizione’s Toni Vilander was fourth quickest, followed by Corvette Racing’s Marcel Fässler.  The whole class was separated by just over three-quarters of a second.

While Fässler may have turned in the fifth fastest time in GTLM, the team’s happiness with that was short-lived.  Just a couple of laps after Fässler set his best time in the No. 4 Chevrolet Corvette C7.R, the car burst into flames in turn 2 of the tri-oval.  Fässler was able to stop the car and exit from the inferno without injury.  However, as you can see here, the No. 4 Corvette was badly burned.

Thankfully Marcel Fassler is OK after the #4 Corvette caught fire at #Roar24 pic.twitter.com/6VWt0cjvgX

As of this writing, Corvette Racing has not officially commented on the fire.  With pull-in for the Rolex 24 at Daytona scheduled for Tue, Jan. 24 and a likely day and a half of hauling required at minimum, the No. 4 will require a complete thrash to be ready.  That is likely regardless of whether the car can be repaired, or if a new chassis is required.

In Prototype Challenge, Performance Tech Motorsports continued to lay down the fast laps.  James French was quickest with a lap of 101.888 seconds (125.785 seconds), more than 1.4 seconds faster than Starworks Motorsport’s Ben Keating.

In GT Daytona, there were some faces putting up fast laps.  Manthey Racing’s Porsche was once again fastest, but this time with Porsche factory driver Sven Müller.  Müller’s lap of 106.810 seconds (119.989 mph) was a tenth of a second quicker than Riley Motorsports’ Jeroen Bleekemolen in the No. 33 Mercedes-AMG GT3.  Stevenson Motorsports’ Robin Liddell was third fastest, followed by Montaplast by Land-Motorsport’s Jules Gounon.  Alex Job Racing’s Pierre Kaffer was fifth fastest.  The top 16 cars back to Maurizio Mediani in the Spirit of Race No. 51 Ferrari 488 GT3 were within a second of Müller.

Alegra Motorsports nominated Spencer Pumpelly on Sunday morning to replace team owner Carlos de Quesada in the No. 28 Porsche 911 GT3 R.  As noted last week, Pumpelly was unexpectedly informed on Wednesday that he would not be in Change Racing’s No. 16 Lamborghini this season.  Pumpelly got some track time in the No. 28 this morning and was quite competitive.  Canadian racer Daniel Morad turned in the quickest lap for the No. 28, good enough for 13th in class.

Some teams, like CORE autosport, have already decided to call it quits.  That isn’t because of any actual problems, though.

Team meeting: we've completed our checklist and we're not going to learn anything new in the cold. Let's call it a day #Roar24 #done pic.twitter.com/ecUNJuzc5j

IMSA WeatherTech SportsCar Championship teams have one more test session scheduled for 2;45 this afternoon.  It will last for one hour.