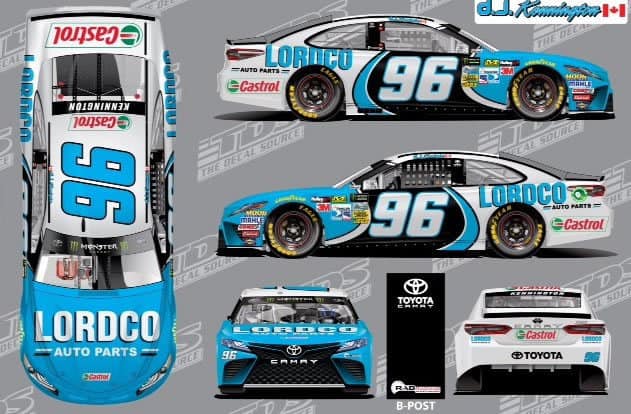 There will be another new Monster Energy NASCAR Cup Series team come this year’s Daytona 500.

Triad Racing Technologies President Marty Gaunt has formed Gaunt Brothers Racing, which formerly operated in the NASCAR Pinty’s Series. The No. 96 team will attempt its debut in the Daytona 500, with DJ Kennington piloting a Toyota Camry. Additionally, the organization will attempt the other three restrictor plate races at Daytona International Speedway and Talladega Superspeedway.

“With the recent unveiling of the 2018 Toyota Camry, we feel that now is the right time to return to the racetrack,” Gaunt said in a press release. “We’re going to provide a concentrated effort this season at tracks on which we can immediately adapt and compete.”

Kennington’s effort will be backed by Castrol, along with Lordco Auto Parts.

The Canada native made his Cup Series debut at Phoenix International Raceway in November, finishing 35th with Premium Motorsports. Kennington has made 50 XFINITY Series starts, with a best finish of 11th at Circuit Gilles Villeneuve in 2010.

Kennington is a two-time Pinty’s Series champion, with titles coming in 2010 and 2012. However, he has failed to visit Victory Lane in the division since an August 2013 triumph at Circuit de Trois-Rivieres.

I will put down my #18 hat and cheer for DJ with all my heart for Speedweeks! So excited for this guy. I’ve watched him wrangle the bullrings in Ontario for 15 years. Who woulda thought a guy from Ontario would get a shot in a Cup car for the 500! So excited for him.hes the type of guy who would sit down with anyone and have a beer with you talking anything racing.

I remember seeing John Gaunt racing in Ontario. I guess he is the brother.