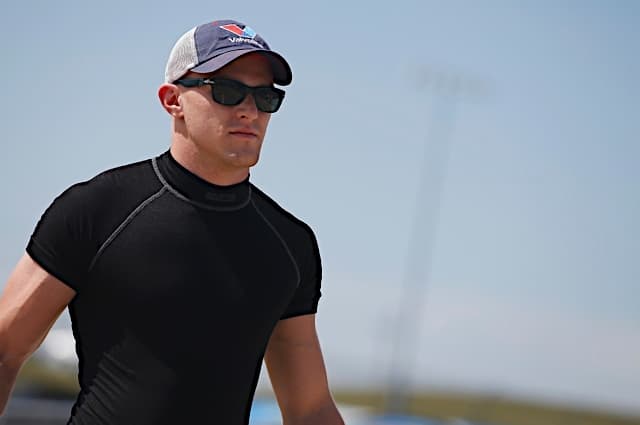 Parker Kligerman will return to the NASCAR Camping World Truck Series in 2017, but with a different look.

The part-time racer is going old-school, partnering with Henderson Motorsports to compete in the organization’s No. 75 truck for at least eight to 10 races. Kligerman attempted to make his debut with the organization at Talladega Superspeedway in October 2016, but failed to qualify after a brake issue during time trials prevented him from keeping pace with the rest of the Truck Series field.

“The crew chief there is the crew chief from my ARCA days, Chris Carrier,” Kligerman told Frontstretch. “The program had some of my old supporters as well. It just came about when someone asked me if the opportunity came about and I was not really sure what I was doing in 2017 anyways.

“Chris and I have always looked at ways to get back to racing together. We haven’t gotten to race in a long time together. My most successful time was with him. It all came together, and I’m grateful for the opportunity the Henderson family and Henderson Motorsports gave me.”

In addition to Kligerman’s time in the truck, the team’s primary driver since 2012, Caleb Holman, will be back for select events. Holman competed in five races in 2016, with a best finish of ninth at Atlanta Motor Speedway in the team’s first event of the year.

“We’ll start at Daytona and we’ll do the mile-and-a-halves,” Kligerman said. “I’ll most likely do the road course at Mosport as well.”

Kligerman makes the move to Henderson Motorsports after competing with Ricky Benton Racing, with whom he ran 10 contests in the No. 92 Ford. The team ran the first eight races of 2016, riding on momentum after earning three straight top 10s to start the year. But after a wreck at Kansas Speedway in May, a rear gear issue at Dover International Speedway and followed by another wreck at Iowa Speedway, the organization was forced to scale back its schedule, competing in two more races with Kligerman behind the wheel and one more with Cole Whitt.

“To me, running a 10-race schedule, my expectations are to go out there and try to win races,” Kligerman said. “That’s what we’re trying to build with the [No.] 75 team. We’re trying to make that program bigger and better, that sort of thing. We want to bring on new partners. It’s the same goals you have no matter what. As a career, in a lot of ways, I’m just having fun.

“I get the chance to race a couple of times a year, knowing I’m going to be racing for a win, knowing that it’s with a good group that’s supportive. We all have the same goals. As I said, at the end of the day, there’s one goal when you get on a racetrack, and that’s to win. Somebody has to win the race, right?”

Not only will Kligerman be racing part-time in 2017, but he will also return to the NASCAR on NBC broadcasts on a regular basis. The Connecticut native regularly appeared on the station’s main NASCAR show, NASCAR America, along with emerging as one of NBC’s pit reporters for its NASCAR XFINITY Series coverage.

Though Kligerman could not say how much pit reporting he would be doing, he did state his role will be increased in 2017.

Overall, the 26-year-old is gearing up for what could very well be his busiest year in NASCAR as he continues to transition to life as a TV personality.

“I’d say over the last year, I’ve had a tremendous amount of fun,” Kligerman said. “There are some opportunities that are coming about and thing I’m trying to put together that would be bigger than just being a driver. Maybe I’ll completely fail and end up with a desk job somewhere. For the time being, I’m having fun with it. When I’m on TV, I want to sound eloquently and coherently.”