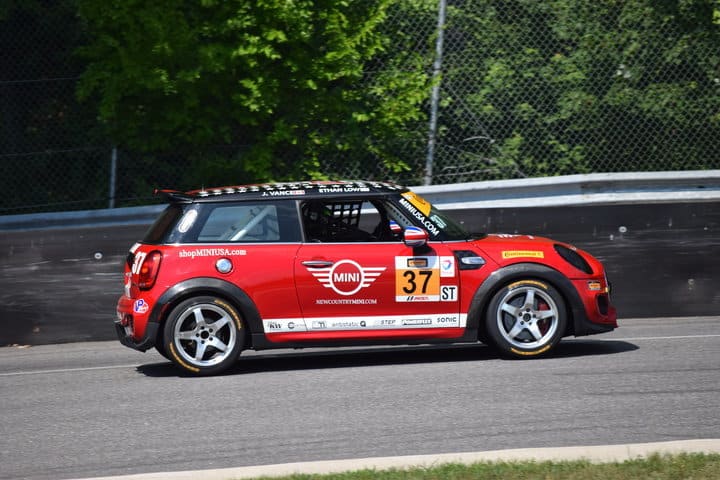 Normally, we would have a nice, blushing introduction to pieces where we interview racers.  It would usually talk about current accomplishments, stats and so on.  But this is a rather unusual circumstance.

At Lime Rock Park in July, we had the pleasure of sitting down with James Vance, driver of the No. 37 MINI John Cooper Works entry for MINI JCW Team in the IMSA Continental Tire SportsCar Challenge.

The interview was an interesting look at racing in Street Tuner, Vance’s brief experiences in what is now the IMSA WeatherTech SportsCar Championship and some personal desires. However, the reality of racing got in the way before we could run the piece.  It left us in what amounted to limbo.  What do you do with such a piece?

We chose to run it in the context of the time, but give proper explanations as well.

Luckily, everything ends happily for the Canadian racer.

Phil Allaway, Frontstretch: When we last talked [at Watkins Glen], you were driving the No. 52, but now you’re sharing the No. 37 with Ethan Low.  How did that move come about?

My contract was up at Canadian Tire Motorsports Park.  Just this past week, we re-signed for the rest of the season.

Allaway: Were you a little nervous after CTMP?  It was pretty much your best run of the year.  You were right up there in the hunt before you handed over to Ethan, who kept it up there until he had an issue in Moss Corner.

Allaway: Were you nervous in terms of your contract situation at the time?

Vance: The weekend before at Watkins Glen, I had qualified the [No. 52] in P2 and I led the first several laps for MINI.  I led for 40 minutes for MINI, and that was huge for them, it was massive.  Ultimately, Ramin [Abdolvahabi] got in the car and fell back down through the order.

At CTMP, we had a legitimate shot at doing something really good there.

I wouldn’t say I was nervous in regards to the contract negotiations and stuff.  There’s only so much you can do there; it’s not like you can pull magic out of nowhere and make something happen.  I do believe that there are weekends that are better than others, for sure.

Allaway: What’s it like having Ethan Low as a teammate?

Vance: [Ethan’s] a good, young up-and-coming driver.  He’s still got a lot of development to do in regards to being a little bit more patient, waiting and understanding the process more rather than just going out there and setting a fast lap.

There are so many arguments throughout the Continental and [WeatherTech SportsCar Championship] paddock.  It’s like a stigma to be the starting driver if you have two quick drivers. Ultimately, you have to just get on with it and do what’s best for the team.  At this point, Ethan is a very good starting driver.  He has good pace; he can take care of the car for the period of time that he’s in it.

If we can overcome that sort of stuff, then that’d be great.

Allaway: Was the No. 37 hurt all that bad after the crash [at CTMP]?

Vance: I believe the toe was knocked out along with all the alignment.  I don’t think it was anything too crazy. I think we had a slight radiator leak, too.  I think we were overheating a little bit, but it wasn’t anything significant.

Allaway: Definitely something that was fixable, especially since you guys had about 10 days after CTMP.

Vance: Right.  The guys made a good turnaround and got all the cars figured out and back to the shop in Indianapolis.  Got the cars rebuilt.

Allaway: Last year, you had the chance to race in Prototype Challenge for Performance Tech Motorsports.  How did that opportunity come together for you?

Vance: I was working with a marketing firm called Grand Solutions, and I was very close to the owner and we got along really well.  About a week before the Rolex 24, he called me and said, “Listen, would you be interested in a Rolex 24 ride?” I’ve had my fair share of experience in aero cars, but the Rolex 24 is a different beast, you know? When you’re being brought into a really good driver lineup, you have to think, “Is this the right thing to do?” Think of the team first.

I figured it out and we made it happen.  I think we were leading PC in the Rolex 24 and having a great showing early on.  Ultimately, it ended for us around 3 a.m. with electrical gremlins. Then, they called me for the [Chevrolet Sports Car Challenge] in Detroit.  They needed a driver and I was in Toronto.  It was last minute, the Tuesday before the race. I showed up, and that was it.  We finished P3.

Allaway: That was in tricky conditions as well.  The end of that race was ridiculous.

Vance: I remember with five laps to go, I was radioing in to the [crew] and saying, “We’re on slicks and it’s pouring with rain out here.  I’m having trouble just nursing [the car around].”

Allaway: This was before the package changed so that the PC cars had traction control.

Vance: No. No traction control.  It was the longest five laps of my entire life. Also, the team hadn’t had a podium that year.  So bringing [Performance Tech Motorsports] home a podium was big.

Allaway: You had the aforementioned PC opportunity last year.  Have any other additional WeatherTech SportsCar Championship opportunities been pitched to you this season?

Vance: Not any this year.  I raced with Racers Edge Motorsports in Pirelli World Challenge in the GTS class at Canadian Tire Motorsports Park.

Vance: We had a good showing there.  We got on the podium twice [in Sprint-X] and finished [sixth] in my Sprint race.

Nothing in WeatherTech yet.  WeatherTech seems to have a lot more full-season drivers this year than it has in a long time.  I’m OK with not having an opportunity.  It means that the economy and this little bubble are going well.  People are able to confirm full-season rides and what have you. I’d love to [have a ride in the WeatherTech SportsCar Championship] in a Porsche RSR, or a Lambo.  Ultimately, it is what it is. I’ve got a great opportunity here [with MINI Team JCW], and if something pops up, I would take their hand off for sure.

Allaway: If you had the chance to race anything outside of sports car racing, what would it be?

Vance: I’d love my shot at the Indy 500.  I think that’s a given.  Any driver in his right mind would like a shot there. I’d also like to do [Red Bull] Global RallyCross.  I really want to do it.

Allaway: I watch it every now and then.  It’s interesting, but it’s a whole different discipline.

Vance: Another one I’d like to try is Formula E.

Vance: Yes.  I find it to be such a revolutionary technology.  It’s changing that side of motorsports.  I think that’s awesome.

Allaway: I think the racing’s pretty good there.  The drivers are aggressive and the fans are generally seeing good stuff.  I just wish they could come up with some kind of setup where they could do battery swapping in the future instead of car swapping.

Vance: I agree.  It would minimize expenses as well.

Allaway:  Yes.  The current rules require everyone to have two cars right now.  Once the tech gets to the point where you can have battery swapping, it will be revolutionary.

At the time of this interview, Vance appeared to be in a good spot.  He had a steady, competitive ride, and things were going well.  In the 2.5-hour race at Lime Rock Park the day after this interview, Vance and teammate Low finished 13th in Street Tuner after Low qualified 11th in class.  The race went caution-free, and in that time, Low and Vance ended up more than three laps off the pace of class winners Chad McCumbee and Stevan McAleer.

Then, the harsh realities of motorsports struck.  Just six days after the Lime Rock race, Vance was notified that he would not be driving for MINI JCW USA any longer.  Mark Pombo, having taken care of his business dealings that resulted in Vance moving over from the No. 52 to the No. 37, returned to the seat for Road America.

However, rather than return Vance to the No. 52, the team chose to go with Nate Norenberg, who drove the car at Canadian Tire Motorsports Park two weeks before Lime Rock.  Vance posted a picture to his Instagram with a brief thought about the situation.

Since then, Vance has not competed in the IMSA Continental Tire SportsCar Challenge.  It’s a sobering touch of reality for professional racers.  Unlike in the Monster Energy NASCAR Cup Series, you’re not necessarily guaranteed a full season if you sign a contract for that period of time.  You can be dropped at any time, with or without cause.  In many different forms of motorsports, drivers are often expected to bring a certain amount of money to the team in order to race.  Vance does bring some sponsorship with him, but sometimes, that’s not enough to guarantee a seat.

This type of scenario is not unique.  Last year, we interviewed Ashley Freiberg at Daytona.  She mentioned at the time that she was up for a full-season ride with MINI JCW Team.  Unfortunately, funding got in the way of that as well.  Freiberg did test one of the team’s cars during the Roar Before the 24 in January, though.

However, Vance recently announced via his Instagram page that he will be back with MINI JCW Team in 2017.

MINI JCW Team has not put out a press release to announces its driver lineups for the 2017 IMSA Continental Tire SportsCar Challenge season.  However, the official entry list for Daytona does show a number of changes for the team.  Vance will be joined in the No. 37 by Mike LaMarra, the 2013 Street Tuner co-champion (with Terry Borcheller at Burton Racing).  No. 52 will have Mark Pombo and Norenberg, while No. 73 will have Derek Jones and Mat Pombo.

The team brought two cars (Nos. 52 and 73) to the Roar Before the 24 test.  In that test, Derek Jones turned in the third fastest Street Tuner lap of the whole test in the final session.  The MINIs appear to have speed.  Vance, Jones and the rest of the MINI JCW Team just have to translate that speed into results.