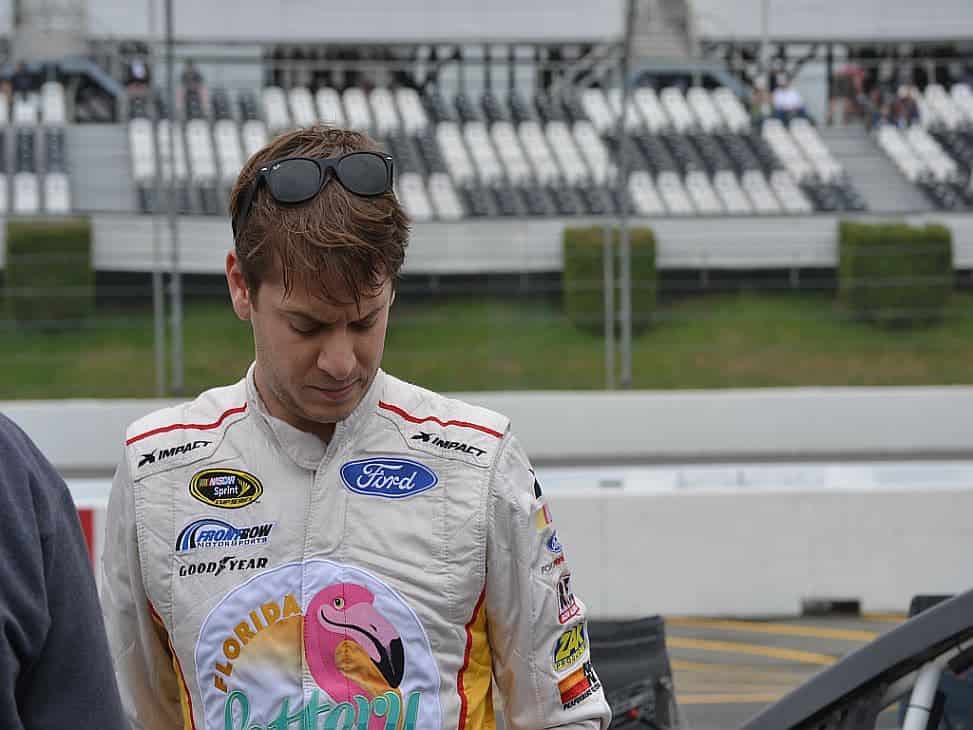 Prior to the end of the 2016 NASCAR season, Frontstretch ran an article discussing who we thought was the most underrated driver in the sport. One name continued to pop up: Landon Cassill.

Perhaps 2017 is the year all that changes.

A little while has passed since Front Row Motorsports formally announced that Cassill would be returning to the team in 2017, piloting the No. 34 car left vacant by Chris Buescher, who joined JTG-Daugherty Racing. In Cassill’s old ride, David Ragan will rejoin FRM, taking over the No. 38 machine.

2016 marked Cassill’s first full season with Front Row Motorsports. In the 36-race schedule, he had a best finish of 11th at Talladega Superspeedway in early May, two weeks after leading 20 laps at Bristol Motor Speedway en route to a 22nd-place finish.

Cassill finished the season with seven top-20 finishes, which was equal to Buescher’s total, though the latter made the Chase after winning a rain-shortened race at Pocono Raceway.

During his career, Cassill has had the tendency of over-performing in low budget equipment, and 2016 was arguably the best equipment he had been in to this point of his Cup career.

“Sometimes, I wish I was overrated and not underrated,” Cassill tells Frontstretch. “I appreciate the support and that people notice how hard I work and how hard my team works. When we have good runs, I feel like we always get credit for that accomplishment and that’s something that you have to work hard for to get that kind of attention. I appreciate getting recognized for that.”

Friends with some of the bigger stars of the sport, Cassill would enjoy to be in their position. However, the 27-year-old believes that the route he is going will play dividends for his career.

During the day, you might find some interesting tweets from the Iowa native, and his online personality has landed him some gigs with some top companies. GQ named him the most fashionable driver in NASCAR. Snapchat sponsored his Ford at Charlotte Motor Speedway in October, resulting in a 19th-place finish. He also made an appearance on the Gary Vee Show on YouTube.

But in the end, it all comes back to being competitive.

“The overrated drivers have some pretty nice sponsorship,” Cassill said. “I don’t know what that really entails. I’m pretty fortunate to make a living in this sport and have a competitive career. It seems like it takes a lot of recognition for that.”

Though he may wish he would receive more of the spotlight, Cassill’s performances on the track seem to get recognized by team owners. He started off his Cup Series career with Phoenix Racing. Since the he has made stops at TRG Motorsports, Germain Racing, BK Racing and Circle Sport Racing before joining Front Row Motorsports.

2016 marked the third time that Cassill competed for Cup Series points, finishing a career-high 29th in the championship standings. In 223 career races, he has one top-five finish, coming at Talladega in 2014, when he finished fourth.

However, in order to gain more publicity, he believes that his performance needs to improve.

Known for performing well on restrictor plate tracks, Cassill is excited to get to Daytona and kickoff 2017. He is hoping that his breakout season has yet to come, possibly coming this upcoming year after a decent 2016.

“The finishes are important, and I think we’ve proven that we can get good finishes by out racing people with strategy,” he said. “It’s the raw speed that we want to get. We want to start making the final round of qualifying and show that we have a car that is capable of running in the top 15.”

He’s far better than either Dillon brother. There’s no reason Cassill and Alex Bowman shouldn’t have good rides by now.