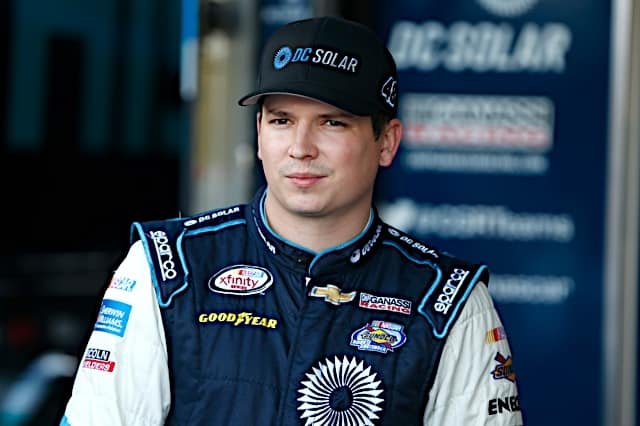 Driver Brennan Poole is determined to win a championship for Chip Ganassi Racing in 2017. For a second season, the white (sometimes black) and blue No. 48 Chevrolet will return to the NASCAR XFINITY Series. With primary sponsor DC Solar renewing its contract with the organization, Poole and crew chief Chad Norris return after finishing eighth in the standings one year ago.

Poole, 25, is ecstatic to return to the helm of his Chevrolet, and expectations within the team’s shop have risen. Coming off a season that featured four top 5s and 17 top 10s, he is eager to bring home both race and championship trophies, proving he is ready for NASCAR’s premier division.

Poole spoke with Frontstretch over the offseason, discussing his expectations for 2017, his relationship with Norris, social media and more.

Joseph Wolkin, Frontstretch.com: You are returning to Chip Ganassi Racing in 2017. What are your expectations for your second full season?

Brennan Poole: Our expectations are pretty high. We want to win some races and the championship. We have a long way to battle there before Homestead. We have a lot of goals and things we’ve discussed, and it’s about executing those goals. Last year, we did the same thing. We had a bunch of realistic goals and I feel like we accomplished all of them other than winning a race. We won a race for five minutes [Talladega], but I don’t know if that counts or not (laughs).

I feel like having a good plan and a good strategy going into it and then executing that strategy and plan, we should be good. Coming back for a second year, we’re in a much better position then we were in last year. Chad Norris [crew chief] and I have built a really good chemistry between one another. In the second half of the year, we were really strong. We were a top-10 car every week, and we were in contention to win a couple of races. We need to keep building on what we were building on, and continue to execute our plans and strategies. We need to work hard to improve on the areas we need to improve on. We’ve had faster racecars, so if I can do the things I need to do and they do the things they need to do, we can execute and one of these weekends will be our weekend.

We will wind up winning a race, and from that point, it’ll be on. I’m excited for the opportunity to run for Chip again. I love Chip and this race team. I’m really thankful to be a part of it and thankful for DC Solar for believing in us as a team and me as a driver, being able to represent them for another year. I feel like we’re a team that can win races. I’m just excited about the year and to get it going.

Wolkin: Chad is coming back with you next year. What do you feel like he brings to the table with his veteran experience?

Poole: Chad has a lot of experience, so having a veteran guy who’s been in a lot of different situations and has worked with a lot of different guys, seen a lot of different things, he’s able to help me in certain areas. He’s able to help keep me focused and keep my confidence up through certain situations that have been tough. I’ve got a lot of trust in him to make the right decision, and he has a lot of trust in me to give him the right information to lead us in the right direction to have a strong racecar. When you have a guy like that with so much experience, someone that has belief and faith in you, it is a huge confidence boost.

I feel like it was tough for me coming into the XFINITY Series. I was in a tough position a couple of years before that, and my confidence was down a little bit. At the start of this year, working with Chad and contending for wins and top 5s, all of those things breed confidence. This team, with Chad’s leadership, we were able to start believing that we can win. When we started to do that and started to go into weekends with a different mindset and attitude, it seemed like everything started to come together. We were just not quite where we needed to be yet. We’re headed in the right direction. Chad is a big part of that, and I’m excited to work with him again.

I know he’s excited to work with me. It’s been an awesome relationship that we’ve been able to build for over a year. Building a crew chief and driver chemistry just takes time. He knows exactly what I’m saying when I tell him how tight I am or what I’m feeling in the track. He’s had to learn all of those things from me. I feel like we’re on the same page and have good chemistry now. I’m really excited to work with him for the second year in a row. I feel like we’re going to be a lot stronger.

Wolkin: You completed the second-most laps in the XFINITY Series last year. What does that mean for you in your first full season in the division?

Poole: One of our goals was to run every lap, and we only had one DNF. That was a goal we accomplished. I need to run every lap and learn as much as I can. The more seat time I got, the better. I feel like if we can do the same thing this year, just having goals and being able to have a way to execute those goals is key. This year, our goals are definitely a little bit steeper. We feel like we’re capable of them, but we need to execute.

We were a first-year team working together for the first time, so we had a lot of challenges. We had to overcome them, and when you have that adversity, it makes you better. Coming back with a lot of the same people in place, having fought through some of that adversity and having to overcome a lot of things, made us better together. I know I keep saying I’m excited, but I’m just looking forward to taking all of those things that we’ve done together and applying them in our plan to be successful.

Wolkin: What do you feel like you guys need to improve on heading into the new season?

Poole: We just need faster racecars. We felt like we were behind in a few areas there. We’re working hard to making all of our stuff better. I need to help my guys out a little bit on qualifying. We need to have a little bit better restarts. We seem to be able to close out a little bit better at the end of races then we did earlier on in the year, but it’s all about trying to get our cars better when we start the race. Some of that is leading my guys in the right direction, and that just comes with experience. Going back to a lot of these places for the second and third time, I have a little bit of a better understanding of where I need to be to help my guys with the car.

Having that experience is going to be a big difference. I also think some of the stuff my team is working on to give us better racecars is key because we’re really close. We just need a little bit more. I’m looking forward to seeing what the guys put together, and I’m working hard to improve everything that I can – my qualifying, restarts and communication of leading my guys in the right direction. If we have all of that stuff come together, I think we’ll be really strong.

Wolkin: You are very social media-savvy. How important is it for a young driver to be involved in all of these different outlets?

Poole: For me, I’m a basketball fan and a big skateboarding fan, and I feel like anytime you can become closer to the athlete and get to know them a little bit better, it helps you become a better fan. I really enjoy being able to know what some of my favorite athletes are doing. I’ve tried to be as open as I can on Twitter, Instagram, Facebook and Snapchat.

I try to answer everyone’s tweets and comments when I can, really connecting with all of my fans. For me, it was something that was really special to me as a kid. Now, it’s so easy to be in contact with fans because of social media. It’s just an awesome thing to be able to use.