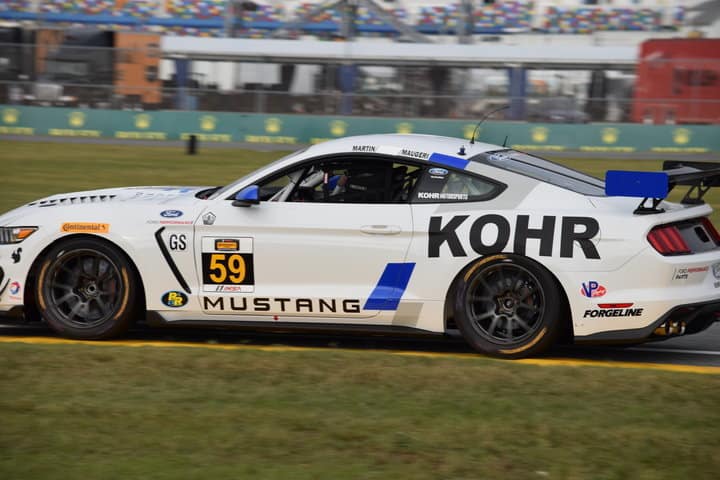 Coming into the Rolex 24 weekend, all eyes were on the new Ford Mustang GT4, unveiled late last year and making its race debut.  In the hands of Multimatic Motorsports’ Jade Buford and Scott Maxwell, the combination was likely to dominate in qualifying.  However, a second horse in the battle appeared just a week before load in at the track.  That second entry sparked a big surprise.

In qualifying, Maxwell was unsurprisingly fast, setting fast laps early on.  He was the first driver to dip down into the 117-second bracket, then the 116-second bracket.  Eventually, Maxwell set a time of 115.788 seconds that was about a second clear of the field.

“I had to wait for the Continental Tires to come up to temperature.  I just found that sweet spot on the third or fourth,” Martin said in the post-qualifying press conference.  “It was pretty exciting out there.  I had no idea what was going on until after I posted the lap.  The [crew told me], ‘Its you and then Maxwell; he’s two-hundredths behind you’.  I’m like ‘Am I third?  Am I sixth?’  They didn’t tell me I was on pole at first.”

Martin’s session was quite exciting.  It started out with a pit road speeding penalty right at the start of the session that necessitated a drive-through.  Afterwards, he “chucked it” into the Bus Stop chicane at such a rate of speed that he was unsure that he would come out the other side.  That allowed him to draft up on one of the McLarens to set his best time.

Maxwell had one more chance at the end of the session to top Martin, but was blocked by Bodymotion Racing’s Cameron Cassels at the exit of the infield.  As a result, Maxwell had to settle for second.  C360R’s Matt Plumb was another half-second back in third, followed by Rennsport One’s Dylan Murcott.  Matthew Keegan rounded out the top 5 in the second C360R McLaren.

In Street Tuner, the battle for pole was not quite as competitive.  The Porsche Cayman was once again the car to have as Rennsport One’s two ST class entries traded the pole back and forth.

Defending ST co-champion Nick Galante was on top early on in the No. 17 Cayman, but he was overtaken by teammate Connor Bloum in the No. 18 Cayman.  With help from third driver Nick Longhi on the spotters’ stand, Bloum was able to find the perfect hole and set a number of quick laps.

On his third lap of the session, Bloum set a time of 124.900 seconds (102.610 mph).  That time held up for the rest of the session to give Bloum the ST pole.  C360R’s Pierre Kleinubing was a half-second back in second.  MINI JCW Team’s Derek Jones qualified third, followed by Murillo Racing’s Jeff Mosing.  CRG I-Do Borrow’s Sarah Cattaneo rounded out the top 5 in the sole Nissan in the field.

The BMW Endurance Challenge at Daytona is scheduled to start at 12:15 p.m. on Friday.  Coverage will be available via live stream at both IMSA.com and FansChoice.tv.