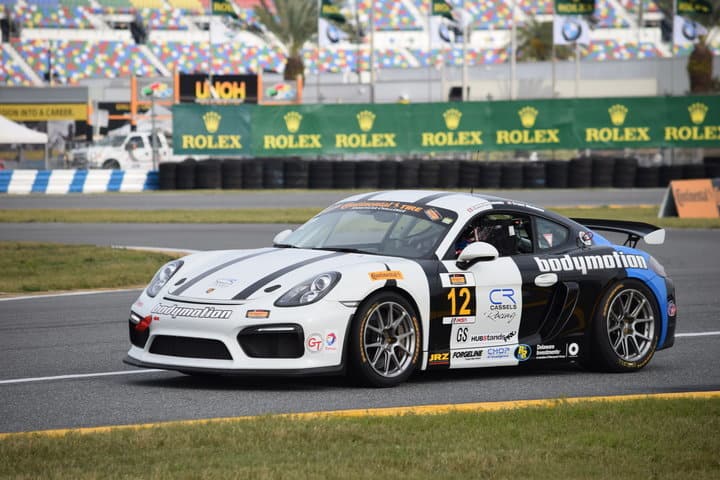 Friday afternoon saw the IMSA Continental Tire SportsCar Challenge begin their season with the first of two four-hour races on the schedule.  Dean Martin was the surprise pole sitter for KohR Motorsports, but it was one of the strongest teams from 2016 that took home the spoils.

Afterwards, Hindman was quite pleased with the team’s hard work over the past couple of weeks.

“I think it took all the hard work from the Bodymotion guys over the offseason to end up with [today’s victory],” Hindman said in the post-race press conference.  “We had some difficulties at the Roar and had to bring the car home early.  There was a lot of work that had to be done in the last two weeks.  We were fortunate to get everything we needed done with some help from Porsche.  We were very fortunate to go out on track without any lingering issues.  For me, the third time’s the charm, it seems.”

Martin’s run at the front was done almost as soon as the green flag flew.  Multimatic Motorsports’ Scott Maxwell took the lead away on the first lap and proceeded to pull away.  Martin was able to keep the No. 59 in contention until a broken axle put the sole customer Mustang GT4 behind the wall for repairs.  The No. 59 ended up finishing 28th overall, 16 laps down.

Maxwell held the lead until the first full-course yellow on lap 20 when Craig Lyons spun the TRG Aston Martin exiting the Bus Stop chicane.  Lyons was then hit by TeamTGM owner/driver Ted Giovanis.  Both drivers were ok, but the cars were done for the day.

Pit strategy was the name of the game on Friday.  The first round of stops put Rennsport One’s Dylan Murcott up front after beating the Multimatic No. 15 out of the pits.  A later pit stop sequence saw Bodymotion Racing’s Cassels rise to the front after staying out.  Despite a massive jump, Murcott and CJ Wilson Racing’s Till Bechtolsheimer ran Cassels down and overwhelmed him.

Ultimately, the race came down to a full course caution when Nico Rondet spun the No. 77 C360R McLaren, then dumped a bunch of fluid in the infield.  That fluid led to a series of additional spins.  Under that yellow, everyone came in to make their final stops.  Maxwell was able to beat Hindman out of the pits, but was caught spinning his wheels while on the air jacks.  That is a pass-through penalty that had to be taken after the restart.  Maxwell and teammate Jade Buford ended up finishing fifth.

Maxwell’s penalty left Hindman unopposed in the lead with CJ Wilson Racing’s two entries driven by Marc Miller and Damien Faulkner four seconds back.  With ten minutes to go, Mark Pombo crashed his No. 52 MINI and brought out a yellow.  The yellow set up a GWC, but Hindman was able to hold off the pack to take the win.

Miller and Bechtolsheimer were second, followed by Faulkner and Russell Ward in third.  Rennsport One’s Murcott and Dillon Machavern were fourth, while Maxwell and Jade Buford rounded out hte top 5

In Street Tuner, the fastest cars at the Roar Before the 24 test ended up being the fastest cars in the race.  Rennsport One’s Connor Bloum led early on, but the fastest car on-track appeared to be the CRG-I Do Borrow Nissan Altima Coupe shared by Sarah Cattaneo and Owen Trinkler.  Cattaneo qualified the No. 44 Nissan fifth in class, but a tire change moved the Altima to the rear.  That’s familiar territory for Cattaneo.  By the time the first yellow flew, Cattaneo was already up to eighth.

Choosing not to pit during the first caution put Cattaneo in the lead.  However, on older rubber, Cattaneo was no match for BimmerWorld’s Tyler Cooke.  Cooke then fell off the pace, allowing MINI JCW Team’s Derek Jones to take the class lead.

From this point, the MINI’s dominated the show.  MINI’s ran 1-2 with James Vance in the No. 37 for much of the final hour of the race.  Trinkler was even faster in the No. 44 than Cattaneo, but they were spoiled by a pass-through penalty for the left front tire changer wearing unapproved safety gear on the final stop.

At the time the penalty was levied, Trinkler had just taken second from Vance.  The pass-through dropped Trinkler all the way to 12th with less than 30 minutes to go.  With speed in the car that included the fastest ST lap of the year at Daytona, Trinkler was able to work his way back up the order.

While Mat Pombo continued to lead in the No. 73 MINI, Vance dropped back in the No. 37 out of the top 10.  The late caution that caused a GWC raised some worries, but Mat Pombo was able to hold off the field to claim his first win for MINI.

Murillo Racing’s Eric Foss and Jeff Mosing were second, while defending championship Spencer Pumpelly and Nick Galante were third for Rennsport One.  Despite that finish, the No. 17 Cayman didn’t look pretty.

Daytona is all about being slippery. @SpencerPumpelly and @galanteracing's car, maybe not so much. Still finished 3rd in ST, though. pic.twitter.com/cXJzHEJwyg

Rennsport One teammates Bloum and Aurora Straus finished fourth while using a two-driver change strategy.  Bloum started and finished the race, while Straus drove in the middle.  Many of the other teams made only one change during the race.  With their superior pace, Trinkler and Cattaneo were able to get back to fifth in a race that they very well could have won, despite running the final two hours without power steering.

Round No. 2 for the IMSA Continental Tire SportsCar Challenge will be on St. Patrick’s Day at Sebring International Raceway.  The two-hour race will be live streamed at IMSA.com and FansChoice.tv.