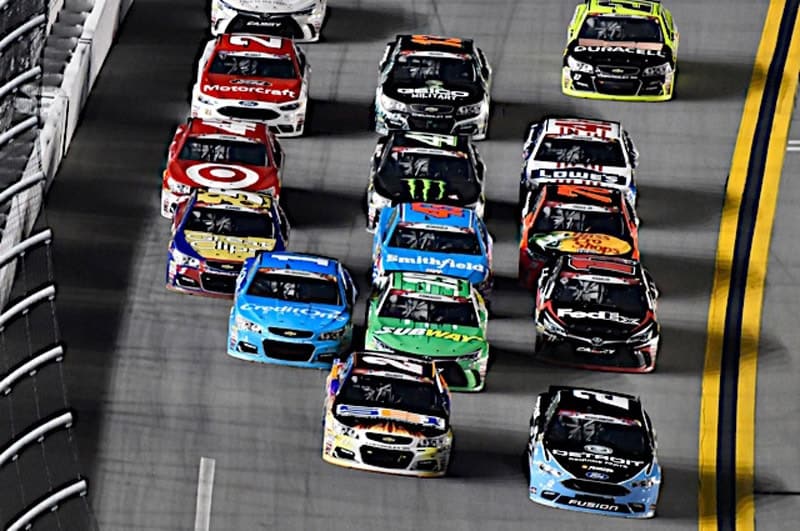 Today NASCAR announced more changes to on track competition for the 2017 season.

The changes, which will cover all three national touring divisions, will mostly be noticed on pit road. Teams will now be on a five-minute clock to fix any repairs that NASCAR deem unsafe for continued competition.

Additionally, NASCAR must deem the car eligible to return to competition.

This means, in many cases, no more carelessly-slapped-on 200 mph tape and no more fresh body panels to replace destroyed ones. Each car must meet a minimum speed standard set by NASCAR prior to the event to return successfully to competition.

Miller went on to add, “They always seem to bring more yellows out with stuff falling off.”

It was noted in the rule changes that any team suffering from non-crash damage, such as an electrical failure, will not be under the new rules system. Any team deemed to fall into this category will still be allowed to fully repair their car with no time limit and can also use the garage area to affect repairs.

“We’re not going to tell a guy who breaks his transmission at Watkins Glen or Pocono, for instance, and coasts into the garage area that he’s out, because that doesn’t create an unsafe situation; that is a mechanical failure, Miller said.

Other changes that will drastically shake things up include the adjustment of how NASCAR applies pit road speeding violations. Any damaged car caught speeding will lose 15 seconds of repair time, and any team that sends too many crew men over the wall will be removed from the race.

Each team is currently allowed six individuals over the wall unless otherwise specified by NASCAR. If a team sends over extra men without NASCAR’s approval that team will be removed from competition for the remainder of the event.

Teams will apply these and the other new competition rules for the first time later this month, as NASCAR’s top three national touring divisions converge on Daytona International Speedway for Speedweeks and the 59th running of the Daytona 500.

The Matt Kenseth a rule to prevent retaliation

So when the “big one” happens at Daytona & Talladega…the field will have just a dozen or so cars in it?

what if a wreck happens to cause little body damage, but causes internal problems? unlimited time to repair that? I can see teams already figuring out ways to manipulate this….

As soon as the crash damage rule has implications for one of the Chosen Few, something will change.

I don’t see this as being a big issue. With the crappy win and you’re in the chase system, there are only 3 to 5 drivers that need those points anyway. Most of the chosen few will win a race during the season so losing 10 points because they can’t get back out on the track and finish 29th instead of 39th won’t really matter.

I suppose it will matter a lot more once the chase starts but during the regular season, not that much. So, yes, it will be interesting to see what happens when one of the chasers have an issue in the later rounds of the chase. I guess we’ll have to see come September. I wouldn’t be surprised if they change the rule for the last ten races and allow chasers an exemption (which would be very unfair).

What BS, the scenarios of this being bogus are too numerous to mention. Just wait till it happens to the darlings of NASCAR…..rule change..waiver as some mentioned..pronto!. So sad what is happening and has been happening, all awhile ignoring there truly one problem, lack of continued competitive racing.

I think this is a good rule. It limits the ability of one participant to put their own selfish needs above the overall flow and outcome of the race. Chances are if you had a problem that necessitated being in the garage that long, you were going to finish below 30th anyway (yes, I know there are examples where that was not the case but they are the exceptions not the norm). With the new points system the bottom 5 finishers only get 1 point anyway so whether you finish 38th or 36th doesn’t really matter. Why have derelict cars running around the track that have 0 probability of getting a top 20 finish but a high probability of causing another debris cautions. I am for any rule that has a chance of lessening the number of cautions in a race.

Also, maybe now a driver/crew chief won’t leave a car with a fixable problem (tire going down) out on the track until it fails hoping to get a timely caution. In some cases the caution doesn’t come out and when the issue occurs someone else is caught up in it as well. The cost of not fixing the issue will be higher now if they end up damaging their car. Instead of losing a lap they will be out of the race. I’m also for any rule that decreases the ability of a driver/team to put what’s in their own best interest above what’s in the other 39 drivers interest. If you were driving down the interstate at 60 mph, would you want a car with a tire ready to blow or parts falling off driving next to you or in front of you?