Is there any sport more American than NASCAR? Well, besides baseball. Or the NFL. Either way, the start of the NASCAR season is upon us after a quiet few months in the off-season.

OK it wasn’t totally quiet. Stewart-Haas Racing is engaged in a legal battle with Danica Patrick’s sponsor Nature’s Bakery, Greg Biffle still doesn’t have a ride and we have a new series sponsor for the top-tier of North American motor sports.

With so much going on, Twitter is a great place to gauge the reaction of those in the sport and beyond. President Donald Trump has long been a notorious tweeter, and naturally has some strong – and frankly, tremendous – opinions on the first weekend with cars on the track since the inauguration.

Besides, it’s President’s Day. Set aside any preconceived political notions and enjoy the observations of Team Spray Tan.

1. With the rain-out of the Advanced Auto Parts Clash at Daytona on Saturday night, Fox Sports 1 filled the void with a re-air of the 1993 Daytona 500. Some of the camerawork back then was striking compared to what we’ve become accustomed to. In-car cameras that panned and could show the driver hard at work, and a truer perspective of what they see in the car has been abandoned in favor of a static shot of the driver with sponsor logos plastered all over the head rests, steering column and roll bars. It’s been bothering me for some time, and I wasn’t the only one to notice this. 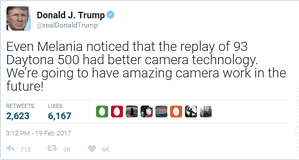 2. The criticism of the camera work was not only limited to the in-car work, but the external cameras as well. CBS had a great shot of the cars coming through Turn 4 head on that is long gone now. They have a camera on a string that runs through the grass in the turns, which gives you the view of, I guess an errant infield rabbit. The new one on the flag stand makes no sense at all. An oblong view of cars going under the starter stand, looks weird and doesn’t bode well for future, says the President.

3. Once the race was underway, things were motoring around smoothly until Jimmie Johnson did his best impression of Dale Earnhardt Jr. in last year’s Daytona 500. Losing it off Turn 4, he was able to catch it only after collecting Kurt Busch, hanging him head-on into the wall. DJT was none too complimentary of the aero balance on the 48. 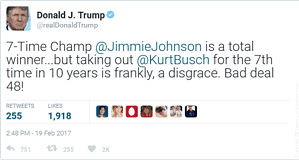 4. Speaking of walls, The Donald has a view or two on walls…

5. Seeing the seven-time champion lose it unassisted had some on social media clamoring for increased downforce. How could one of the best drivers ever lose it just riding along in traffic like that? Back in the 1980s, it was common place to accidents off of the fourth turn, leading CBS’ Ken Squier to deem it “Calamity Corner” – it lead to incidents such as this one with Cale Yarborough:

…then again with Darrell Waltrip:

…and let’s not forget Randy Lajoie:

…and who could overlook Ricky Rudd:

The Donald has been around the Sun 70 times, so you know he remembers.

6. As it came down to decision time on the final lap, Brad Keselowski made his move off Turn 2, attempting to take the win from leader Denny Hamlin in his Toyota. Trump is never shy about voicing his opinion on what he considers bad deals for American companies, but waded in with a conspiracy theory of his own. 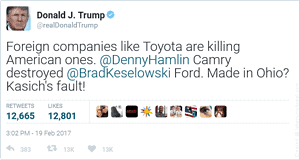 7. As Joey Logano stood in Victory Lane, some on social media voiced their displeasure over the Monster Energy girls in their trademark black pleather outfits that are a bit revealing. I’m pretty sure that’s not the first time we’ve witnessed such a thing, be it the Unocal 76 Race Stoppers, The Budweiser Girls at Watkins Glen, or one luminary of motor sports history.

8. So, we’re off to a bit of a negative start, but there were many positives to take away from the action on Sunday afternoon. Chief among them, Earnhardt in the booth is always a plus for the broadcast, particularly when it comes to the super speedways at Daytona and Talladega.

9. After The Clash at Daytona was completed, Daytona 500 qualifying was set to begin at 3:00 p.m. Just about that time there were still 12 cars trying to get through pre-qualifying inspection. NASCAR uses lasers and an array of templates that measure nearly every area of the car, leaving little to the imagination of fabricators and engineers. This kind of arcane rule enforcement is both stifling and contrary to competitions, resulting in virtually identical cars. It makes for a pain during inspection and once the race is underway. 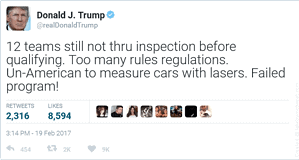 10. It’s been a contentious few months since our election. Friends arguing with friends, family members nearly coming to blows over political positioning. As an offer to the opposition, POTUS offered this olive branch:

Although I don’t twitter, I thank you so much for sharing Donald’s. Especially the last one. He does recognize historical facts, he does recognize other people have feelings, and when those feelings are hurt, he tries to help as best he can.
I enjoyed your article

Does he? Or does someone(s) do his research? I guess he doesn’t think it’s fake news.

One of the dumber articles I have read in sometime pertaining to Nascar and politics aside, why promote an individual who is doing a great job of creating divides within the country. The irony in this is while Trump is promoting Anerica first, Nascar’s growth has come to a complete halt because it has been unable to grow in the international market. Every other major sport has a major international footprint and continually working towards it while Nascar is goimg backwards. So backwards the sport might disappear off major television in 5 years. Just take the Monster Energy deal, which is a complete slap in the face. Jr’s Nationwide deal pays more yearly then what the series title sponsor does. The sport is not growing to the point where its going to get passed by MMA as a Americas #5 sport. To some of you its no bigbdeal, but to the people at Nascar, they ate biting their nails hoping to see an influc of ratings and attendance. The money has not been comig in and if it continues go do so, the face of the sport will change in the net 5 years.

While I thought this was hilarious, you guys do know this is satire “fake news!”… even if you’re NOT on the Twitter!

Donald and Clinton are both trash, and the people who voted for either one are nothing short of scumbags.

I remember when the Busch Clash was all about the money you could win. And Calamity corner was a term used as much as Amen corner during their respective events. Today the money is not mentioned at all. And seldom is heard about these ‘corners’ names anymore. It must of offended someone and the networks forbid the term.

Vito, you might want to make it a bit more clear that this is satire and not the truth. Wouldn’t want the haters to have their panties in a bunch. You already have some commenters that think the comments are real.