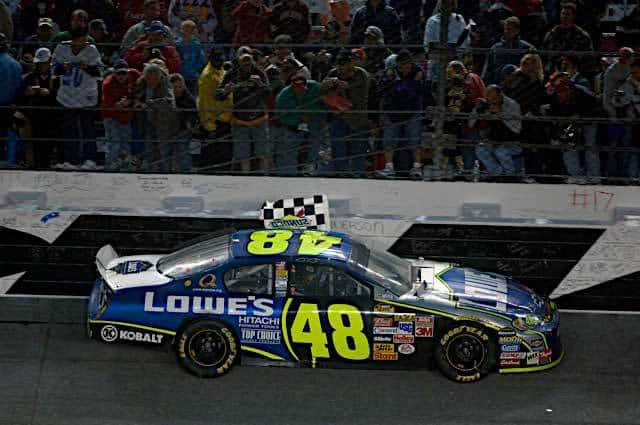 The Great American Race: the Daytona 500.  It’s the one every driver wants to win, but in 56 tries, just 37 drivers can actually claim a victory in NASCAR’s biggest event.  We all remember seven-time champion Dale Earnhardt’s emotional win in 1998 after 20 years of heartbreak, but did you know that since that memorable race, five drivers claimed both the series title and a Daytona 500 victory? Four of them have won it more than once, the last just a single time.

Perhaps the most memorable part of Jarrett’s win (also the first Daytona 500 victory for team owner Joe Gibbs) was the call from the TV booth, by his father, Ned.  It was Earnhardt Jarrett beat to the line that day, and while Earnhardt won his sixth title that year, it would be another five years before he’d claim this race. The race was just the second win of Jarrett’s Hall of Fame career.

Gordon’s first Daytona 500 trophy was the 21st trophy of his still-young career.  Already a champion by 1997, Wonderboy earned the attention of many fans because he won so much, so early, and a lot of them hated him for it.  Still, on this day, Gordon and Hendrick Motorsports asserted their dominance with Gordon beating teammates Terry Labonte and Ricky Craven for a 1-2-3 HMS finish.

Kenseth was six years removed from his title when he took home the Harley Earl Trophy in a backup car after the race was called 48 laps shy of the scheduled distance when the spring rains came; the race had already been delayed a day.  The usually stoic Kenseth was tearfully emotional as he thanked his team and family.  Kenseth won the race a second time for owner Jack Roush in 2012, his last year with the team, before moving to Joe Gibbs’ No. 20.

Kevin Harvick won the race, but his victory was overshadowed by a vicious last-lap crash that claimed multiple cars, including Harvick’s teammate Clint Bowyer, who flipped through the tri-oval grass in flames. It was Mark Martin who gave up the lead to Harvick on the final lap.  It’s Harvick’s only win in the Great American race to date.

Johnson hadn’t won the first of his seven Cup titles when he won the 500 for the first time…without crew chief Chad Knaus, who was serving a suspension for a violation in qualifying. With the white flag in the air, Johnson had the lead, but Ryan Newman was on his tail, leaving the win in the hands of the third-place driver, who happened to be a former (and future) teammate of Johnson’s, and a childhood friend (Casey Mears).  That twist of fate was enough to give Johnson the win, and to kick off the first of five straight championship seasons.  Like Kenseth, Johnson gave a rare show of emotion in Victory Lane.