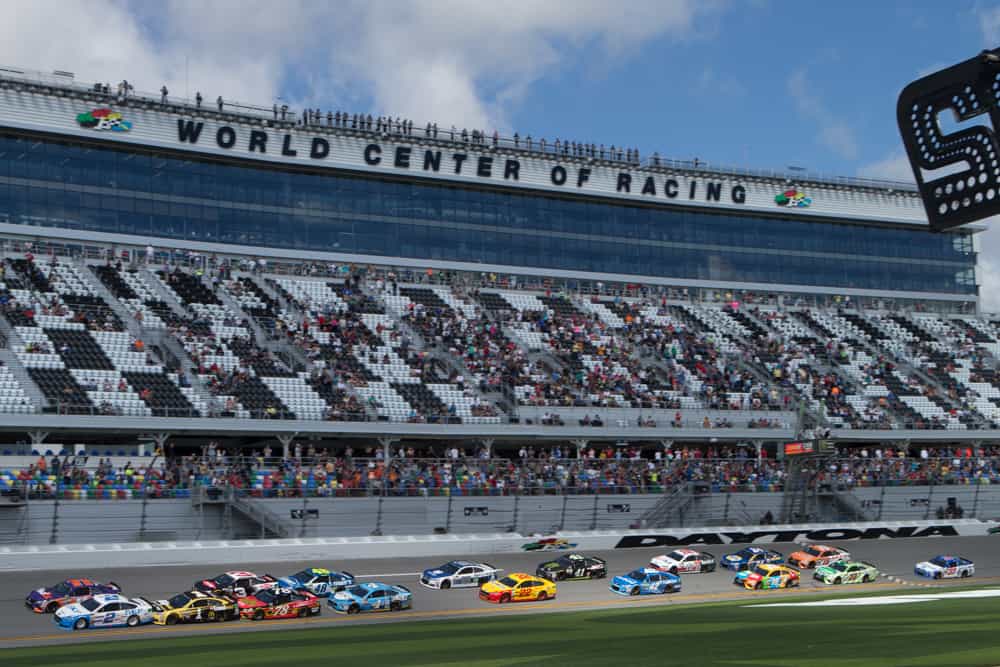 No need to get into anything heady with yet another critique or defense of NASCAR and all of its wonders and ills.  Let’s just get things going.

Happiness Is…Newness. Back in 1971, R.J. Reynolds took over the naming rights for NASCAR’s top division of racing, bringing about what became known as the Winston Cup Series. Along with titular aspect of the deal came the restructuring of the race calendar, slimming the number of races on the schedule, while also creating a points system that crowned the season-long champion.

The changes, at that point, were rather substantial but also went a long way toward solidifying the sport. Today, NASCAR sits in an uneasy position; once having a lofty clout in the sporting world, the sport has seen its influence wane and now fights to find and retain fans.

The sky-is-falling narrative is one that has circled the track for years now, and many so-called purists or longtime followers have found nothing redemptive in the changes announced for this year.

It’s not totally improbable that such a thing may happen. The vitriol directed toward the sport may say otherwise, but perhaps the radical alterations are what was needed. The new segment aspects are really nothing more than planned “debris” cautions, after all.

This weekend will be the start of the show to see if things might go right for the sport while the drivers are going left around the track.

Happiness Is…Smartness. Dale Earnhardt Jr. and his super-tuned noggin are poised to return to racing this weekend. For some people, it seems or feels like years since he was behind the wheel – that’s right, the last time he was in a car it had the No. 8 on the door and Budweiser on the hood.

OK, it hasn’t been that long.

Earnhardt’s absence was significant for a number of reasons. First, it showed how his fans would react to NASCAR races without him – a sure sign of things to come in the next few years. Second, Alex Bowman benefited from some surprising seat time to be able both to hone his skills and showcase his talents. But third, and most importantly, he brought all kinds of attention to the concussion concern in the sport.

That NASCAR will now have a roving safety team making their way to each race to keep an eye on the drivers shows a commitment by the sport to care for those who keep us entertained. But questions still surround this idea. Will drivers be forced to retired early? What kind of concussion can sideline a driver? What access to data exists? What is the threshold to trigger NASCAR’s response in holding out a driver?

There’s a lot of questions, and for all of NASCAR’s silly moves sometimes, this one is a no-brainer.

Happiness Is…Outfits. Monster Energy brings a different attitude than the former series sponsor, Sprint. One could argue that the cell provider held a corporate atmosphere, or in colloquial parlance, the stuffy, button-upped kind of climate.

The change to Monster has already seen a change in some of this aspect, namely regarding the trophy girls.

While the Sprint girls showed up on pit road and victory circle in tailored drivers suits and nearly always had them zipped to the neck, the Monster girls (if that’s what they’re called) were seen at the Advance Auto Parts Clash last weekend in black skintight leggings and what could be considered a bodice or corset on top.

Naturally, such a display of has brought a reaction, or as Maxim magazine stated, “Prudish NASCAR Fans Are Outraged by Monster Energy Girls’ Sexy Outfits.” What is funny here is that pit girls have been a part of racing since the sport began and they have displayed varying amounts of skin over the years. This change, however, stirred up many who see protecting their children from such “scantily” (scandalously?) clad women as necessity.

Monster is having none of it. The company already announced that there will be no changes to what the girls wear. In fact, the company’s statement said that the NASCAR girls are dressed rather conservatively compared to what their girls wear at other events they sponsor. (By the way, is there any way to get away from calling them girls? It seems a little condescending.)

It is important to remember that Monster is attempting to bring a brashness to the sport, something many feel it has lost, and the models are just another way to do so, in conjunction with their hopes for drivers getting into skirmishes.

Happiness Is…Weather. A quick check of the weather shows a wonderful forecast for the Daytona 500 weekend. That’s great news, especially compared to the rain that washed the Clash from Saturday night to Sunday last weekend. While that wouldn’t usually be a big deal, there’s something about kicking off the season under the lights that brings a bit of a wonderful spectacle.

“Today, NASCAR sits in an uneasy position; once having a lofty clout in the sporting world, the sport has seen its influence wane and now fights to find and retain fans.”

Remind me again, what necessitated all those changes back in 2003? Were ratings plummeting? Were fans not showing up at the track? No, things were great but they could resist f-ing around with something that wasn’t broken until they f-ed it up.

Now it seems like they’ve tried everything but putting things back the way they were. It’s probably too late for that as an entire generation of fans have walked out the door but at some point it might be worth a try.

A no-brainer! I get it. Concussions, no-brainer. Wecome back. Long season, lets see how silly the fox booth can be this year.

“The sky-is-falling narrative is one that has circled the track for years now, and many so-called purists or longtime followers have found nothing redemptive in the changes announced for this year.”

Perhaps they’re just pissing down our collective back & telling us it’s raining. Sincerely.

Maybe Danica can join the Monster Energy girls in a Super Bowl commercial. That should be worth $5,000,000 (probably more next year) for 30 seconds. But I don’t think they need to use the product.

There’s always the chance to go to Hooters(for the wings)!!!!

“But what if the changes are just what the sport needs”? Why does a sport need any changes if the “sport” is functioning, a actually functioning machine of what it was created to do?

And the whining about the Monster Girls outfits is just ridiculous, like all the temper tantrums these days….