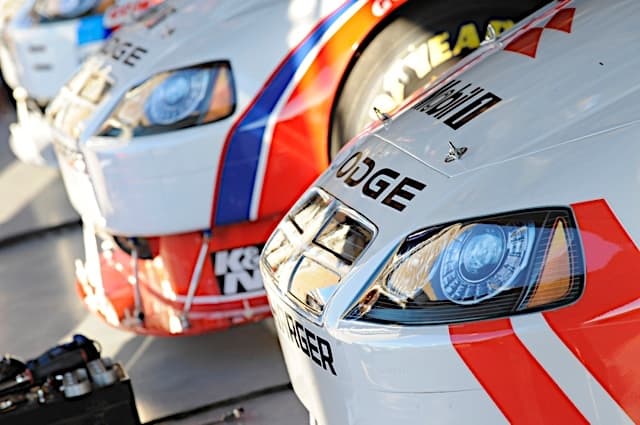 NASCAR is back, but there is something that isn’t.

Yeah, Dodge. Remember the days of the Intrepid and the Charger? Well, and of course, the Avenger that never happened. Sometimes, if you look really close at the XFINITY Series field, you will even see Mike Harmon’s basic black Dodge Challenger that rides near the rear of the field, out-dated by several years now.

But in the midst of a time when NASCAR is changing its platform drastically with new race formats, rule changes and a new title sponsor that is ideally marketable and edgier than anything the sport saw with Sprint or Winston for that matter, there are opportunities for new – or in this case, old – companies to get involved in NASCAR.

A: Sergio Marchionne, the CEO of Fiat Chrysler Automobiles, came out in early December saying he is interested in bringing the OEM back into NASCAR. While it is clear he is interested, it does not mean it will happen.

“I’m the one that made the decision to pull Dodge out,” Marchionne said. “I am the guilty party at the table. In 2009, we came out of bankruptcy. We couldn’t [justify] racing in NASCAR when I was trying to pay bills and make payroll.”

Now that Dodge is in full-recovery mode, it is a rather solid time for them to return to NASCAR.

In early January, Fiat Chrysler Automobiles announced it plans to invest $1 billion in the United States instead of relocating its locations in Mexico, according to Bloomberg.

Dodge, according to NASCAR engine builder Doug Yates, who is the president and CEO of Roush Yates Engines, still has an engine that could compete against top NASCAR teams with the proper research and development needed to catch up since its exit in 2012.

But re-joining the NASCAR realm will not be an easy task if Marchionne is serious about investing in a sport that is seeing declining attendance and ratings, which was exposed in a recent Wall Street Journal story. Good luck explaining that one to board members.

However, it is doable, and Dodge would be wise to do so.

The opportunity to return to a race-winning OEM is out there if a large team is willing to take the risk.

Stewart-Haas Racing just made an extremely bold move by leaving Chevrolet for Ford. If a group(s) can make the switch to Dodge right away, it would certainly generate revenue for the manufacturer, whether or not ratings and attendance increase or not.

While other manufacturers have expressed interest in joining the NASCAR rankings, it would make sense for Dodge to return to the sport. Remember, the older generation of fans are used to Dodge’s winning ways. Why not introduce that to the younger fans?

Only time will tell, but it is quite possible that Dodge re-enters NASCAR within the next year or so.

A: The first few weeks of Dale Earnhardt Jr.’s return are going to be very telling about his future.

NASCAR’s Most Popular Driver for more than 15 years is essentially contemplating retirement sooner rather than later due to his health. He is currently putting off extending his contract with Hendrick Motorsports, which expires at season’s end.

Earnhardt missed exactly half of the 2016 season due to a concussion, initially making the call on a week-by-week basis while doctors determined whether he would be able to return to the seat of his racecar. But once they diagnosed him with a concussion, he was forced to sit out the remaining races of the year.

While Earnhardt is unsure how much his history of concussions will affect on his on-track ability, he will take some time to evaluate his future. Over the off-season, he married his longtime girlfriend, Amy, and will eventually start a family.

The North Carolina native has been racing full-time for 17 years, but never until this past season did he experience such adversity with his health.

Earnhardt had a respectable run in his 18 starts last year, earning five top fives and six top 10s, aligning quite well with his Hendrick comrades. However, as Jimmie Johnson went on to win his seventh Cup Series title, Earnhardt could have likely joined him in the Chase if it weren’t for his illness, meaning he would have had a shot at winning his first Cup title.

With seven wins since 2014, he clearly still has the ability race at the top of series. He can still win. He can still be consistent. But with an uncertain future and health risks in mind, 2017 might be the time when Earnhardt performs better than ever, mainly because he brings a new perspective to each race.

He beat death and certainly beat what could be a life-threatening injury. Now, he has the chance to do something special.

Where exactly are you getting your stock quotes and what symbol are you referencing on the NASDAQ? Fiat Chrysler is a sub-$12.00 stock trading on the NYSE.