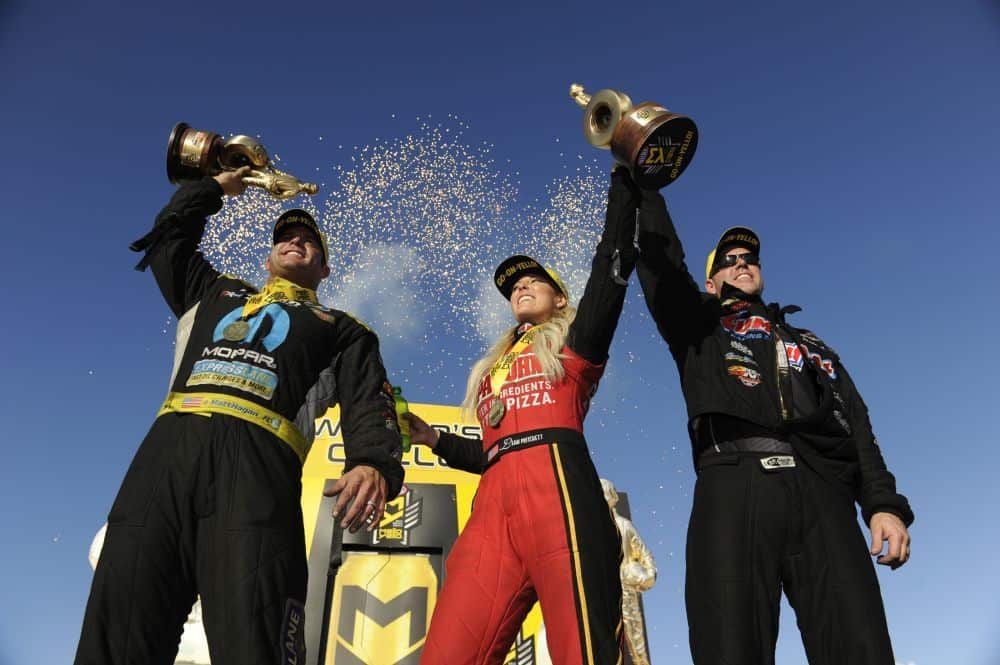 Welcome to the first edition of Nitro Shots for 2017. Welcome back if you are a returning reader and welcome to the little straight-line corner of Frontstretch if you are a new reader. The season is already underway and the teams of the NHRA Mello Yello Series are already on their way to the second race of the season at Wildhorse Pass in Phoenix this weekend.

Be sure to check out our Sunday column, Pace Laps, for event coverage of all the 2017 races, including a brief recap of the Winternationals in that most recent edition. This spot will be the place for commentary, news and other features every Thursday.

To start out the year with this first column, let’s look at a few things to watch for as continuing stories in 2017. First off: the ladies. It’s the first thing that comes to mind because Leah Pritchett struck early, winning the first Top Fuel Wally of the year. Is it still a continuing story? Certainly a couple of years ago when female drivers started to win on a regular basis it was, but now, well, it’s pretty regular, as evidenced by Pritchett’s early win. In addition to Pritchett, Courtney Force has already made a final round appearance as well, just one event in.

Brittany Force and Alexis DeJoria also return this year, both also capable of winning at any time. Maybe, then, the story among these drivers is Erica Enders. She’s a two-time Pro Stock champion, but last season was dismal, not just for Enders, but also for new teammate, five-time Pro Stock champion Jeg Coughlin.

They debuted a new Dodge Dart last season, and the combination did not prove to be successful. Elite Motorsports and Mopar parted ways, and the team has returned to the Chevrolet camp, campaigning Camaros for 2017, the marque with which Enders won her two consecutive championships in 2014 and 2015.

Making the pain worse for Elite was the total domination of the KB Racing cars of Jason Line and Greg Anderson. Those two went head to head for the first Pro Stock victory of this season two weeks ago at the Winternationals, but Enders did make it to the semifinals, so will the return to Chevrolet bring her back to championship form? Will Elite be the best hope to unseat the KB contingent as the dominant force this year?

A few of the other Pro Stock teams began to close the gap toward the end of last season, and among those was Gray Motorsports, but they will return with a rookie driver, Tanner Gray, son of former driver Shane Gray, behind the wheel. Gray is just one of the fresh faces breaking into the ranks this season. He is joined by another familiar name in the Nitro divisions, Troy Coughlin Jr., son of Pro Mod championship driver Troy Coughlin and actually a third-generation racer from the famous family, who has made his debut driving for Kalitta Motorsports in Top Fuel, filling the seat newly vacated by JR Todd.

Todd has made the move to Funny Car to fill the DHL seat vacated by Del Worsham, who has moved to his family-owned operation. Drag racing, like other forms of motorsports, is an extremely family-oriented sport. Worsham wanted the opportunity to go racing with his father.

As is often the case, it’s going to take an updated score card for a little while to figure out all the changes, with drivers coming and going and teams moving and shifting over the off-season. Some things remain the same, however, and the television package is one of them.

NHRA had a huge 2017 debut with the Winternationals on FOX, with over 1 million viewers tuning in for the live broadcast.  NHRA reached those kind of numbers a time or two last season, but only when the broadcast had NASCAR as a lead-in. With the Winternationals running all by itself, a full week before NASCAR hit the track at Daytona, they did this one without help from the guys who turn left. Good on NHRA. Perhaps the numbers will continue to grow.

It wasn’t just the Mello Yello Series that benefited from the new television package. The Lucas Oil Series and J&A Service Pro Mod Series also saw significant gains last year. Both series will continue to be broadcast across the FOX networks this year.

The Pro Mod Series is also expanding from 10 races to 12, with one of the additions bound to be a can’t-miss event as the Pro Mods will join the Mello Yello Series drivers by going four-wide at zMAX Dragway in Charlotte in April.

Going forward in this spot, as in year’s past, we will feature driver profiles, news updates, tech facts, videos and statistics, but since this preview is a bit longer, we’ll just leave you with the weekend TV schedule for the moment.