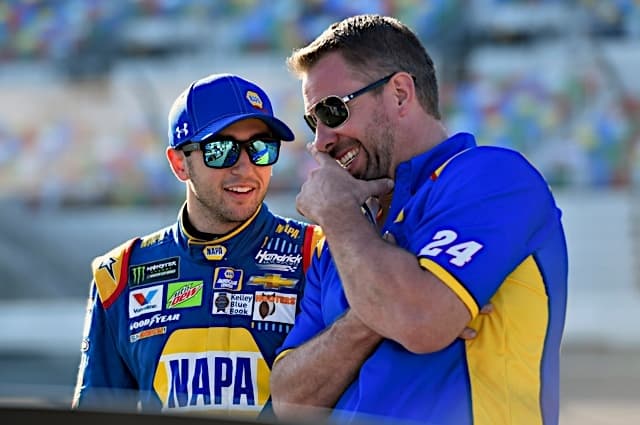 Pole-sitter Chase Elliott ended the first Duel the same way: with the rest of the field chasing him.

After starting up front in the opening Can-Am Duel 150-mile race Thursday evening, Elliott wound up in Victory Lane, scoring 10 regular season points. It’s the first time NASCAR’s Daytona qualifiers have counted toward the standings since 1971.

It was a solid comeback for Elliott, shuffled out of the draft early and forced to fight from behind. At the competition caution on Lap 25, he was running a disappointing sixth.

But after a solid pit stop, the second-year driver of the No. 24 car surged on the restart and was back in front by Lap 37. Leading 25 laps in total, he earned his first victory of any kind in the Cup Series.

“I just had a lot of steam under the hood really,” he said. “I think that was the biggest thing.  The temperatures tonight being kind of cool it really suited our car well.

“Just a great way to start the season.  I know it’s just a Duel win.  We would rather it be on Sunday, but at the same time it means a lot to me.”

Elliott, who earned his second consecutive pole for the 500 will now go for the Daytona trifecta. He’s also tied for the top of the Cup Series standings with the winner of Thursday’s second Duel.

Elliott survived a flurry of three-abreast activity behind him in large part to Jamie McMurray. The No. 1 car spent much of the race pushing whomever was in the lead, helping pseudo-teammate Elliott maintain position down the stretch while ending the race in the runner-up spot.

“It was a really good way to start the weekend, the car is in one piece,” McMurray said. “This car seems to suck up better than our Clash car and I was able to push. When you’re able to do that, people tend to want to work with you a little bit more.”

Coming to the white flag, Kevin Harvick had a run on Elliott before the No. 24 car threw the block. The No. 4 machine wound up third after another run fell short paired with Brad Keselowski.

Keselowski fell to fourth after dominating the opening 25 laps in his Ford. Matt Kenseth rounded out the top five, part of a disappointing Joe Gibbs Racing effort where none of the Toyotas were really a factor. Trevor Bayne, Martin Truex, Jr., Aric Almirola, Joey Logano and Cole Whitt rounded out the top 10.

Corey LaJoie won the race within a race, qualifying for his first Daytona 500 albeit in somewhat awkward fashion. The No. 83 car finished 18th, three positions ahead of Reed Sorenson after the two made contact with 11 laps to go. Sorenson’s No. 55 car spun hard into the inside wall, potentially eliminating him from a seventh start in the Great American Race.

“Every kid dreams of racing in the Daytona 500, and I get to do that on Sunday,” LaJoie said. “I really do feel bad about Reed. I just tried to fill a hole, but it was getting down to it. I probably did have position on him; I’m trying to get into the Daytona 500. If my mom was in that spot, I would probably wreck her, too.”

Now, Sorenson will have to sweat out the second Duel and hope Elliott Sadler finishes as the highest unqualified driver. That would put Sorenson into the race on speed.

“I’m not sure how it got to that point,” he said of the incident with Lajoie. “I feel like he just turned us. Between the two cars that needed to make the race, I think that’s pretty crappy. It’s something he felt like he needed to do. People can get hurt when you do stuff like that. That was a pretty hard lick right there. I didn’t appreciate it very much.”