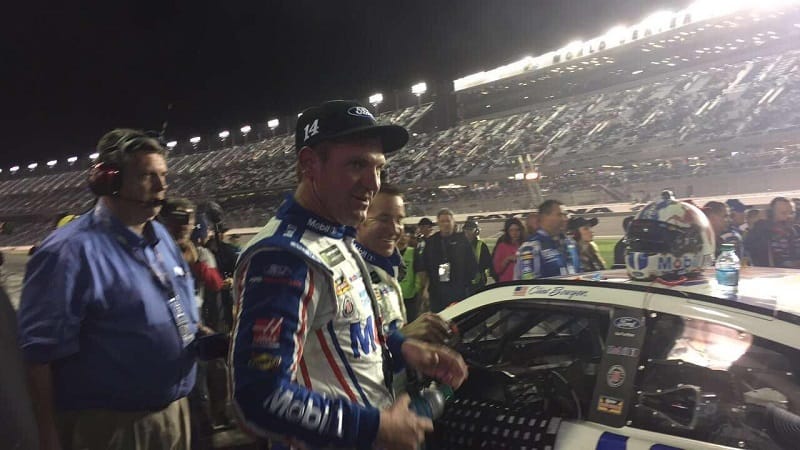 Clint Bowyer has never been so happy to speak to the media after a race.

The eight-time Cup Series winner had not finished in the top five since Aug. 2015. However, that changed on Thursday evening during the Can-Am Duels as the newest driver of the No. 14 Ford was energized as ever.

“Right off the bat, I knew I had a fast car,” Bowyer said with a large smile. “At the start, I was like, I have to get this thing to the 500. There’s no sense in tearing this thing up because it’s plenty capable of winning the big dance on Sunday.”

That mentality is much different compared to last year, when Bowyer qualified and finished 18th in a Duel that consisted of 24 cars.

For the second straight year, he started off the season with a new team. However, this year is different. This time around, expectations are high as the eight-time Monster Energy NASCAR Cup Series winner is in what he believes is a much better scenario.

As his red, white and blue-soaked racecar circled around Daytona International Speedway, he began reeling in the leaders. When the white flag waved in the flag stand, new teammate Kurt Busch was attempting to catch eventual race-winner Denny Hamlin.

But Bowyer wanted to smell Victory Lane again for the first time since Oct. 2012. He understands now, after a year with HScott Motorsports, struggling to finish in the top 20 on a weekly basis, that nothing is a given in this sport.

“All of those cars that we were racing around had drafting practice,” Bowyer said. “They had the Clash and everything like that under their belts. First time out for us and the car has plenty of speed. There’s nothing wrong with it. It’s in one piece and it’s in tact.

“I learned some things and missed some opportunities that I wasn’t ready for. We’ll perfect all of those, and I’ll be more prepared and go after it in the 500.”

Bowyer will take the green flag for his 13th Daytona 500 on Sunday tying a career-best starting spot of fourth in the season-opener.

Replacing three-time Cup Series champion Tony Stewart, Bowyer has high expectations for not only Sunday’s race, but the entire season. As he exited the car, he told a Ford official, “this Ford is fast as hell. I can actually win this.”

As Bowyer settles into the SHR camp, the smile he had as he exited his new ride says it all.

“I’m real confident for Sunday,” Bowyer said. “Any time you can improve, improve and improve the whole time you’re out there — hell, we’ve improved the whole time since we’ve been here. Handling characteristics, there’s a couple of things — now that I’ve had some drafting practice for the 500 — that I need to help me be a little more stable and comfortable behind the wheel. I think if we get that down, I think we’ll be just fine.”