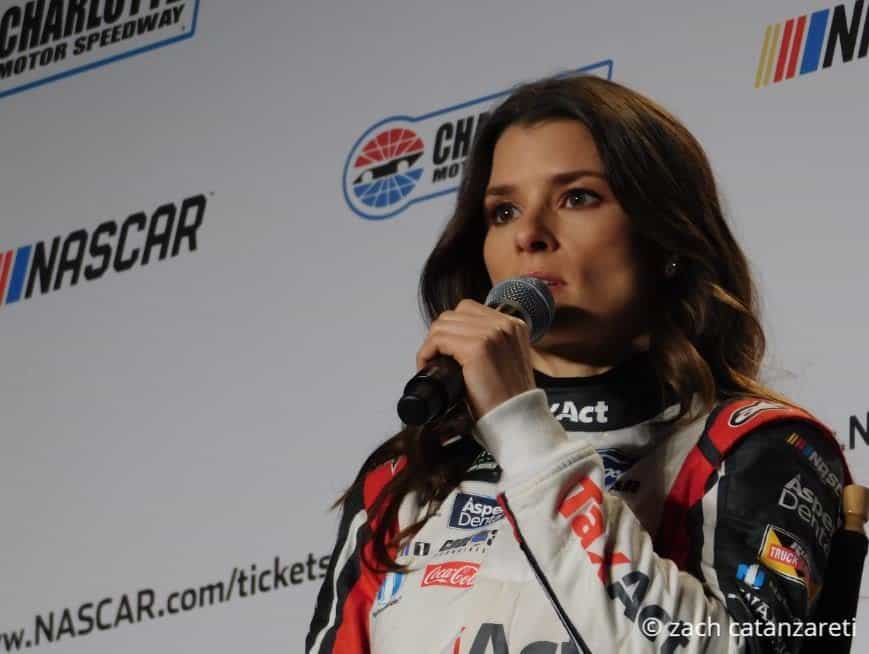 Two races into the season, one of them being an exhibition event and she has notched a fourth-place effort in the Clash and a seventh in Thursday nights Can-Am Duels in preparation for Sunday’s Daytona 500.

The runs have come since Stewart-Haas Racing made the jump to Ford over the off-season. On Thursday night, she was competing around the top 10 for the majority of the race, but a pit stop on Lap 48 set her back in traffic after she made a four-tire pit stop.

On the last lap she was running as high as fourth, falling to seventh in the running order.

“It was nice to be able to tell Edsel Ford [III] that the Ford was very good,” Patrick said following the second Can-Am Duel race. “It’s been a good start and the cars have been in one piece. Fortunately, the car is more stable in traffic then it has been in years. I feel like the power is good and I feel like we have a good shot on Sunday.”

Compared to the Clash, Patrick showed more raw speed in the Duel race. On the last lap of the Clash, she jumped from 10th to fourth after Brad Keselowski made a bold move under Denny Hamlin for the race win, which led to a crash in Turn 1, allowing Joey Logano to notch the victory.

“I think there were some things that were different about the build of the car whether it was with the petals or steering, its just a different car,” she said. “I felt like what improved a lot from tonight from the Clash was that I felt really good in the draft close to cars. I felt like my short distance momentum was not as good in the Clash. I got big runs, but a car-length back I was weak. I felt like that was fixed for tonight.”

Patrick earned four regular season points with her seventh-place finish. For the first time since 1971, points were on the line in the Duel race, which led to more intense pack racing, specifically in the second Duel.

“I don’t know if it was in my head or not, but it almost felt like the competition caution was like a warm up for a segment because everybody got crazy before the yellow as if it really mattered,” she said. “I think that might be something to come, getting a little bit more crazy. I think that there was a lot more on the line and I think its going to influence the competition in a positive way for the viewers.”

In 2013, Patrick finished a career-high eighth in five Daytona 500 starts. Her average finish in the Great American race is 28.4, leading seven total laps.

There are four practice sessions between the end of Patrick’s Duel race and the Daytona 500, but she will not compete in the opening session on Friday. According to crew chief Billy Scott, there is a possibility they may even skip the second practice, but will debrief over night.

“We have to work on everything,” she said. “If you don’t try to improve on everything in the Cup Series, you will fall behind eventually.

Why did you stop? Have you stopped yet?

I actually had cut and pasted about 10 lines of “hahas” but when I posted only the first line appeared, or, since I didn’t include a space at the end of each line, maybe it treats it like one line and only the maximum characters for one line is displayed. Regardless, you knew what I was trying to do so I got my point across.

Maybe you should put a few hee-hees in there and a couple of nudge-nudge wink-winks. It’s good for a chuckle each time I think of it.

She’s just EYE CANDY for myself !!!

That’s why she’s in the car.

5 paragraph had Edsel and Patrick in same sentence……double failure in the automotive world.

I want to give props/kudos to one of you Danica ‘haters’ who said last year her new sponsor, NATURE’S BAKERY, would have problems being a NASCAR Cup Car major sponsor. You were so right. Sometimes ‘haters’ know what they are talking about. I’m trying to get with the program. Is TAX ACT the same company as TAX SLAYER that JR Motorsports had/has on their cars?