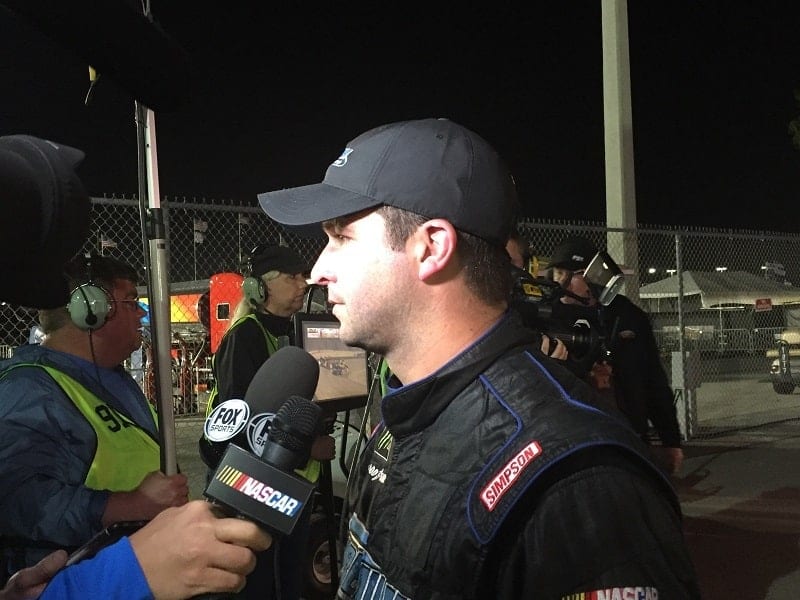 Reed Sorenson felt he had a solid shot at making the Daytona 500. Following a two-tire stop, his No. 55 Premium Motorsports car surged inside the top 10. He kept it there for the latter stages in the first of two Can-Am Duels at Daytona International Speedway Thursday evening.

But with 12 laps remaining in the race, Sorenson’s night, plus his hopes to make the race came to a crushing halt.

“I was looking for [a car] and next thing I know, I got turned pretty hard,” Sorenson said in front of the infield medical center as the checkered flag flew. “I have no idea.”

Corey LaJoie, attempting to make his third career Monster Energy NASCAR Cup Series start and first since Oct. 2014, was behind Sorenson as the pack exited the tri-oval on the frontstretch. Suddenly, Sorenson felt a tap on his bumper, shoving him across the track in an incident eerily similar to the one which forced Kyle Busch to miss 11 races in 2015.

“I’m not sure how it got to that point,” a dejected Sorenson said. “I feel like he just turned us. Between the two cars that needed to make the race, I think that’s pretty crappy. It’s something he felt like he needed to do. People can get hurt when you do stuff like that. That was a pretty hard lick right there. I didn’t appreciate it very much.”

Sorenson finished last in the Duel, failing to qualify for this year’s race. As for Lajoie, it was clear sailing for him once Sorenson was on the sidelines as Gaughan played it safe and allowed the No. 83 Toyota of BK Racing to earn their spot in the field.

“Every kid dreams of racing in the Daytona 500, and I get to do that on Sunday,” LaJoie said. “I really do feel bad about Reed. I just tried to fill a hole, but it was getting down to it. I probably did have position on him; I’m trying to get into the Daytona 500. If my mom was in that spot, I would probably wreck her, too.”

Sorenson misses the Daytona 500 as DJ Kennington beat Elliott Sadler in Duel No. 2 to lock himself into the Great American Race.

“I wouldn’t think at this level in the sport, you can just run the race like you’re supposed to and not have to worry about that,” Sorenson said. “I’m just disappointed someone would do something like that. It was a hard hit.

“I probably shouldn’t speak to him tonight.”