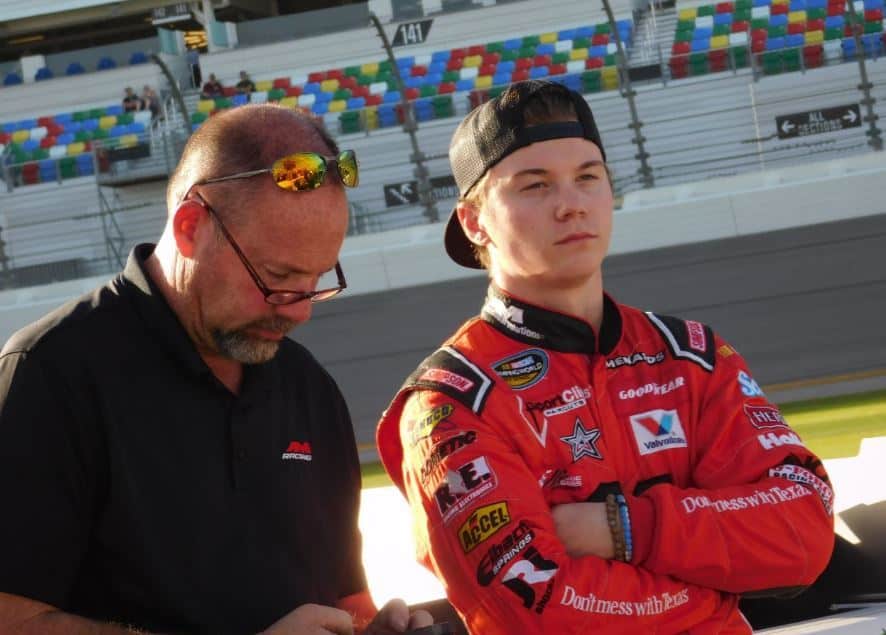 In what was one of the wilder Daytona Camping World Truck Series races in recent memory, the young guns took over on the last lap with the top four finishers all being under 22 years old.

After getting into a second-lap melee, Austin Wayne Self finished in the runner-up position, just behind race-winner Kaz Grala.

Driving with a bandaged up race truck for the remaining 98 laps, Self spent much of the night barely hanging onto the tail end of the lead draft. However, that all changed on the last lap when a wreck encountered on the backstretch taking out most of the trucks running in the top 10.

“I knew they were going to get a little wild,” Self told Frontstretch.com after the race. “Once we got to the backstretch all hell broke loose a little bit. Kaz got in front of me and I followed him through. The [No.] 29 was running by my side and I was stuck in the middle then I saw a little opening and cut down.”

Gaining multiple positions on the last lap, Self set a new career-high finish. Previously, his best effort was at Eldora Speedway in 2016, where he finished ninth, his only other career top-10 finish.

Originally, Self wasn’t scheduled to compete in the NextEra Energy Resources 250 as Justin Fontaine spent a night in the hospital last weekend  after crashing in the ARCA Series race at Daytona. He was diagnosed with a mild compression fracture of his L1 vertebrae and will be in a back brace for the next three months.

Having a rough 2016 at AM Racing, team owner Tim Self decided to put NASCAR veteran JJ Yeley in the team’s primary car, replacing Self.

“We put this together three weeks ago,” Self said. “You never know what’s going to happen when you are at Daytona. We don’t have all the funds we need like a lot of those guys have. We work our butts off just as hard as they do. We get to the race track and we want to win just as bad as they do. We do everything we can to run up front and for a little small team like us, it’s pretty big.”

Yeley ended the evening in ninth, his second career Truck Series top 10 in his 23rd start.

Personally, Self has been coming to Daytona for the better past decade. To have his best-career finish come at the World Center of Racnig was big for the Texas native.

“I’ve been coming here for a long time,” he said. “I used to do Daytona CART week and race down in Turn 3. I’ve been coming here since I was like 10 or 11 years old. Daytona has always been a big place. To be able to come here and have the success and bring it home in one piece to finish second it’s awesome.”

Despite not knowing how many races he will compete in this season, Self remains optimistic. He’s looking at running the two races in his home state at Texas Motor Speedway, as well as Eldora and the road course at Canadian Tire Motorsport Park. Other races have yet to be named.

His previous best restrictor plate finish was 14th at Talladega Superspeedway in October, the race where he led his only career lap in NASCAR.

“This race felt like a win at first,” Self said. “I came and settled down a little bit and I really wanted one more position. We’re going to get there.”