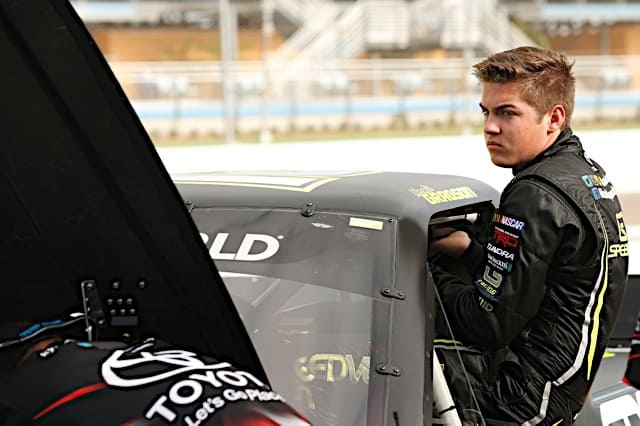 It took the Camping World Truck Series just one lap before the Big One reared its ugly head Friday evening at Daytona.

Around the 10th spot, cars began to shuffle out of the tri-oval when Chase Briscoe got into the back of Noah Gragson, triggering an 11-truck pileup.

John Hunter Nemechek, Tyler Young, Terry Jones, Austin Cindric, Ryan Truex, Clay Greenfield, Ross Chastain, Stewart Friesen and Tommy Joe Martins found themselves in the melee. Eight of them – a full quarter of the field – found themselves sitting in the garage by the end of Lap 4.

Gragson, running his first full season for Kyle Busch Motorsports turned from pusher to pinball in a heartbeat. As the No. 18 truck lost control, the rest of the pack behind him simply had nowhere to go in the draft.

“It was good for the lap I got, but I got punted in the back by the [No.] 29 with really tight racing,” Gragson said of the incident. “I knew that there was going to be a Big One, I just didn’t know it was going to happen so early. I had fun in the lap I got and learned a little bit.”

Cindric may have taken the hardest hit into the outside wall after getting turned by a spinning Gragson. The driver of the No. 19 truck, whose best finish is 20th in plate races learned a hard lesson in how quickly pack racing can turn against you at Daytona.

“It’s unfortunate that we are out, but we did complete one lap,” Cindric said sarcastically. “When it comes to racing aggressively, that was a bit much. I expected the new format to be really aggressive, but obviously not to that extent. People weren’t using their heads too much out there.”

The incident took out several underdogs and darkhorse picks for the win. In 2016, Truex finished second in the season-opening Truck Series race, but this year he will finish 28th with Hattori Racing as the team steps up to full-time competition.

“I don’t know why everyone was so impatient to start,” Truex said. “We might need a new truck, we hit pretty hard. I saw smoke, checked up and someone lifted my rear tires off the ground.

“It’s in the past and you can’t dwell on it. We will have to rebuild and make it better.”

The same goes for more than a quarter of Friday night’s Truck Series field.