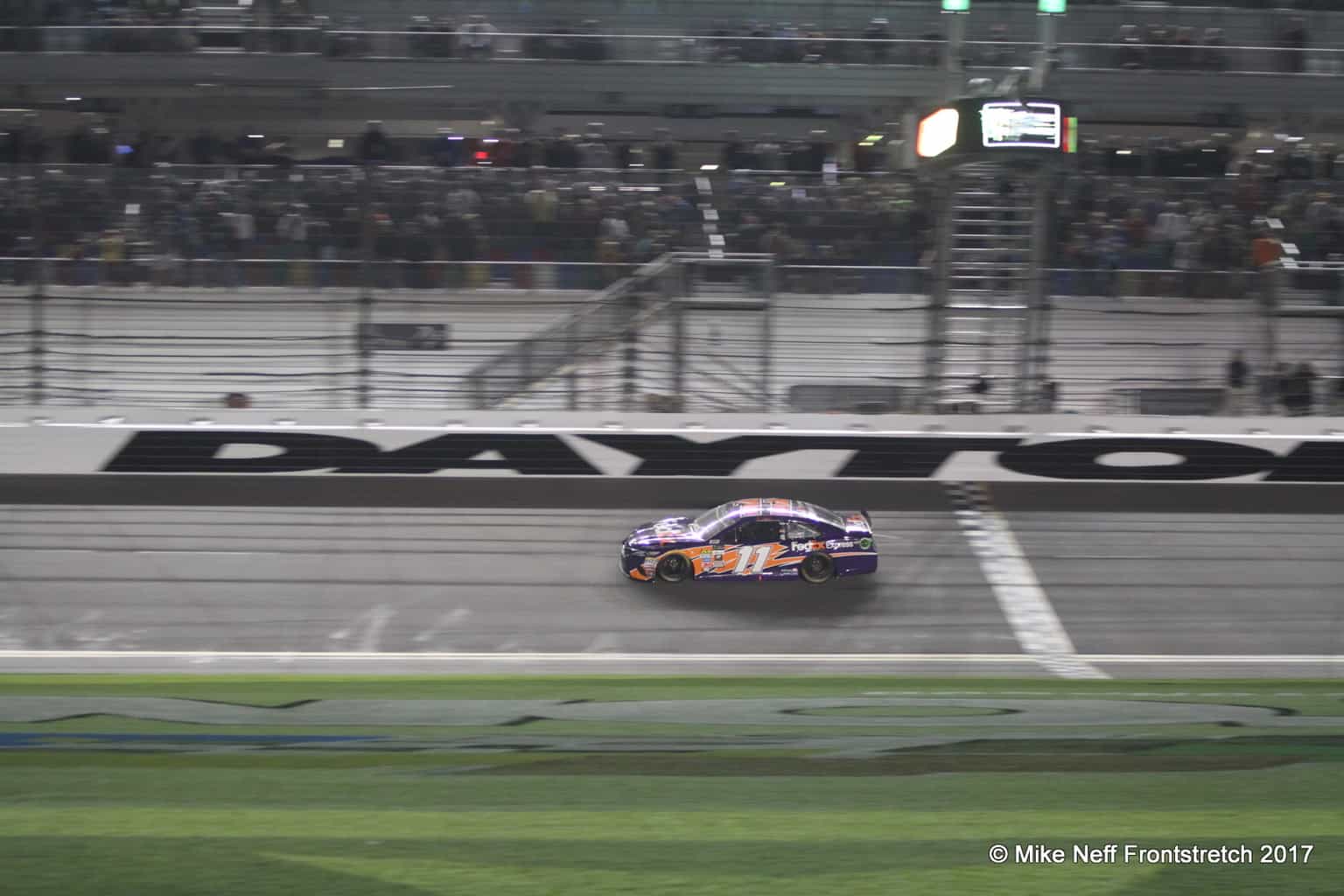 Who’s in the headline – With all but two positions filled for the Daytona 500, the Can-Am Duels are more about who races their way in rather than who wins. Chase Elliott and Denny Hamlin won the Duels, but the story was Corey LaJoie and DJ Kennington racing their way into the Great American Race. Both drivers are long-time short track racers who are making their first runs in the 500. The difference is, at 39, Kennington is closer to the end of his career, while LaJoie is still looking to make it to the top levels and stay, at 25 years old.

What happened – In the first Duel, Elliott led the first lap, but was swallowed by the field for the next 36 laps. As the race passed halfway and the tires began to wear a little, he threw his No. 24 car to the outside in turns 3 and 4 during Thursday’s race. While Elliott was dominating the last 24 laps of the race, LaJoie was trying to get by Reed Sorenson for the transfer spot into the 500. LaJoie had a run on Sorenson on lap 50 and tried to make a move to the middle lane. Sorenson moved down to block him. The cars touched and it sent Sorenson to the inside wall, not far from where Kyle Busch‘s vicious crash took place two years ago. After the race went back to green, LaJoie stayed in front of Brendan Gaughan, and as a result, is in the 59th Daytona 500.

The second duel saw a long parade of single file racing at the front of the pack with racing in the middle and back. Dale Earnhardt Jr. led 53 of the first 58 laps.

With two laps to go, Denny Hamlin muscled his way around Earnhardt, which shuffled him back into the pack, and allowed the defending 500 winner to win his second race of the week at Daytona International Speedway. The drama for the transfer spot didn’t look like it would amount to much as Timmy Hill dropped out of the race early, which left Elliott Sadler and Kennington to battle for the transfer spot.

Sadler dropped off the back of the pack at the start of the race and after the competition caution, choosing not to mix it up because he was guaranteed a starting spot. Kennington had to finish in front of Sadler or Sorenson would make it into the race on time. When the caution flew for Jimmie Johnson cutting a tire, Sadler was back in the mix and this time raced it out. Coming off of turn four for the checkered flag, Sadler led Kennington. However, the line Kennington chose moved forward and he qualified for the 500 by inches.

Why you should care – In the grand scheme of things, the Duels hold little drama thanks to the short field of entries. However, for the first time since 1971, they paid points toward qualifying for the championship. As a result, Elliott and Hamlin are currently tied for the point lead. Other than that, LaJoie and Kennington are the best stories of the weekend.

What your friends are talking about – The story of the week has been Monster Girl outfits. For some reason, a group of vocal fans has been butt hurt over the fact that the models utilized by new Cup sponsor Monster actually flaunt the fact that they have attractive bodies. Somehow that is shocking and unacceptable to some race fans. It would appear that these fans have been living under a rock because Monster has always utilized beautiful women in sexy outfits as part of their motorsports activation.

For the people saying it goes against the family atmosphere of Cup racing, they need to watch a Supercross race on Saturday night. The stands are filled with women and children who love the sport and have no concern over the outfits the models are wearing. They also need to remember back to the Winston girls and, racing icon, Linda Vaughn. Ms. Hurst Shifter showed more flesh than the Monster Girls for years at race tracks all across the country.

Based on the press clippings over the last three or four months, Monster is the new title sponsor for NASCAR. Looking around the grounds at Daytona International Speedway, you can barely tell it. Rolling into the World Center of Speed you would expect to see a large amount of black and bright green. Aside from the rigs that are utilized for credentials and officials, there is very little signage or product activation visible. The sponsorship was announced late in the year so there may be more on the way, but it is surprising that the debut of a new title sponsor is so subdued from a marketing activation perspective.

Earnhardt Jr. told SportsCenter during Media Day at Daytona International Speedway, that he’d consider retiring if he managed to win the title in 2017. He said winning a title is his ultimate goal and, once that was accomplished, he’d have to find other motivation to come back and race. He admits he has a great fanbase and running for them would be a motivation, but he could see hanging it up if he is able to secure a Cup title this season.

Who is mad – Sorenson has to be pissed. He made a strategy call to work his way to the top 10 after the competition caution. The move put him on the track with older tires than LaJoie. As a result he was back in the pack and ultimately was taken out by an aggressive move. He still had a chance to make the race if Sadler had finished in front of Kennington, but that didn’t happen by a few inches.

Who is happy – It was mentioned earlier but Kennington is most assuredly the happiest man in the DIS garage this weekend. The effort to come to Daytona came together in a four-week span. His longtime sponsor Castrol helped make it possible but it was still a wing and a prayer for the team to make the race. Thanks to a good decision coming off of turn 4, he got in the right line and put himself in the race. For someone who has been racing in the NASCAR ranks for some 25 years, it is a realization of a lifelong dream.

What is in the cooler – The racing in the Duels was a little bit more intense than the last few years, thanks to the awarding of points toward the championship, but it still lacks the urgency of the days when the races truly set the field for the 500. The battle for the transfer spots among ‘open’ teams is intense but there are basically two cars battling for one spot in each race. The fact that a person who loses out in the first race could still make it in based on who races in during the second race is absurd. That said we’ll give the Duels three mildly cold Budweisers. Hoping for more on Sunday.

Where do you point your DVR Sunday – If for some reason you won’t be watching the Great American Race, you can DVR it on your local FOX affiliate. You can also listen on your MRN affiliate or SiriusXM NASCAR Channel 90. The coverage begins at 2:00 p.m. ET.

Why can’t they just call them the Twin Qualifiers again?

Imagine shifty Reverend Joe next to Linda with his wife watching!