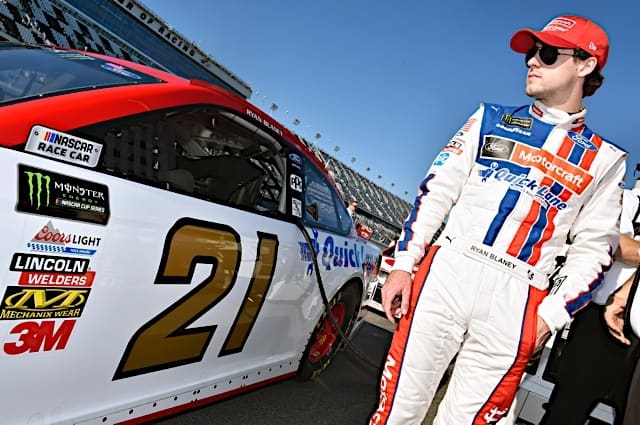 The Daytona 500 also marks the beginning of the full field NASCAR Daily Fantasy Sports season, and Frontstretch will be your go-to source when building your 2017 DraftKings lineups.

Here are two hot-start picks for this weekend.

Ryan Blaney will be running the Daytona 500 in his backup car as a result of contact while racing Jimmie Johnson for position during the second of the two Can-Am Duels at Daytona Thursday. Blaney and Johnson were side by side as David Ragan bumped Johnson in the rear and loosened him up enough to force Blaney into the outside wall. Blaney suffered a flat tire and enough damage for the team to decide to switch to the backup.

Blaney’s official starting spot will be 36th, even though he will need to start from the rear. That shouldn’t deter from adding him to potential lineups. In two of the three races Blaney has run at Daytona he has finished inside the top 20.

With pass differential points up for grabs from 36th and forward for him, a top-20 finish would gather at least 16 positive position points. DraftKings pays out 24 points for 20th place and one point per position up until second. That leaves us with 40 points minimum if Blaney were to keep it clean. Ryan Blaney’s low price of $7,300 is an incredible bargain.

Martin Truex Jr. finished seventh in the first of the two Can-Am Duels, but the Furniture Row Racing Toyota failed post-race inspection due to improper ride height. The penalty for the failed inspection is the loss of his starting spot, so Truex will start the Daytona 500 from 35th.

What is bad news for Truex is good news for DraftKings fantasy players. A car that was near the top of the field in practice is now starting in the back of the pack. Similar to Blaney, a top-10 finish would result in at least 60 DK points. Draftkings also awards .5 points per fastest lap, so the potential for a large payday is high.

Two of Truex’s three top-10 finishes at Daytona have come since moving to Furniture Row Racing. The team was suffering from a bad template when making chassis in preparation for this race, perhaps part of offseason growing pains as they move a two-car team. But owner Barney Visser said Saturday morning the team has fixed the problem, giving confidence Truex and rookie Erik Jones will be near the front of the pack in the 500.

New to DraftKings? Now’s your chance to get involved! The start of the NASCAR season is the perfect time to sign up for their $10,000 freeroll. This contest is completely free for anyone to join. All you have to do is draft a team of six drivers for the race on Sunday for a chance to win!

There’s $10,000 in total prizes and over 4,500 entries will win money guaranteed. The contest locks at 2:00 PM ET on Sunday so be sure to click the link above and draft your team before then.

Whaaaaaaat….no Danica??? Let me guess you probably voted for Trump too right.