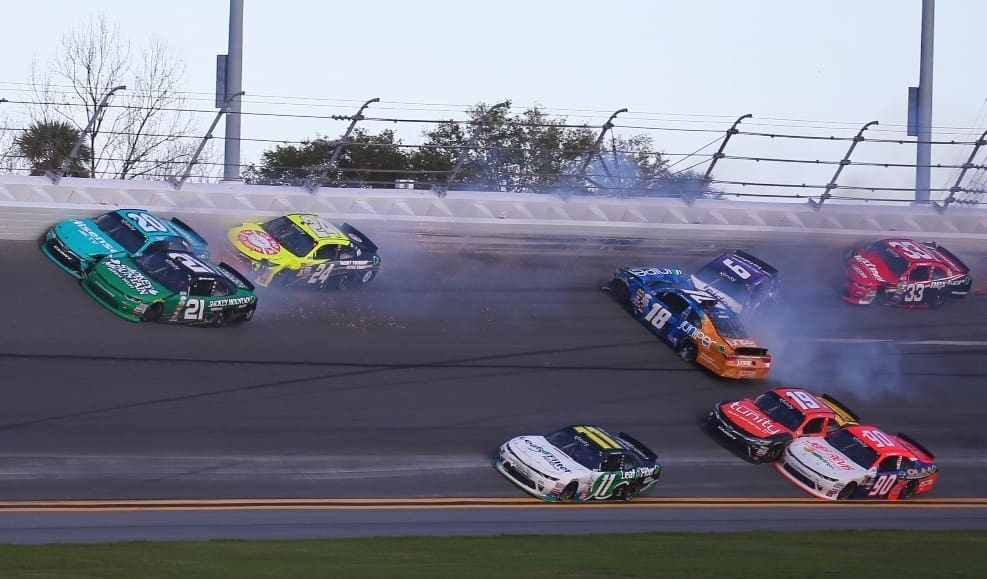 Even before the field finished the first stage in the season-opening Powershares QQQ 300, they were wrecking at Daytona International Speedway.

On Lap 23 of the 120-lap XFINITY Series race, chaos broke out in Turn 3 when rookie Tyler Reddick was turned into the pack while racing inside the top 10. What followed was a massive 13-car crash that swallowed up William Byron, Ryan Reed and Spencer Gallagher, who expects the worst when racing at a plate track.

“What are you going to do? Get mad about it?” Gallagher said. “Yeah, it’s no fun at all when this happens – getting taken out way too early – but all things flow. You can’t let yourself get too down about these things.

“I didn’t have any time to think anything but ‘Oh man, this is going to suck.’ I was pretty much a pinball after that. This is plate racing, stuff happens. Wear a helmet.”

Not all drivers were so content after the early mess. Jeremy Clements, one of the underdog racers sees Daytona as an opportunity for his No. 51 team and was disappointed to not stick around longer.

“It sucks,” Clements said. “Spotter said they’re wrecking, I slowed down and bam, I got hit from every direction. It kills us. I hate that. I wanted to be involved in this race and have a chance to win.”

But wrecks like these can swallow up all types of drivers, big and small. Rookie Cole Custer, backed by powerful Stewart-Haas Racing wound up in the XFINITY garage after becoming an innocent victim.

“We just got collected,” Custer said. “I saw the No. 42 get turned and there was nowhere to go. It’s Daytona, you’re going to have this all the time.”

All drivers were released from the infield care center and checked out OK. Zach Catanzareti

As soon as the green flag waved again, it felt like seconds before the red flag waved once more.

This time, rookie Daniel Hemric got loose entering Turn 3, getting into the side of Erik Jones‘ car.

“It’s unfortunate because I was learning quite a bit for tomorrow that I think was going to help,” Jones said. “I’m not 100 percent sure what happened out there.”

Nine cars were involved in the wreck, including Darrell Wallace Jr., reigning champion Daniel Suarez and Justin Allgaier, who were hoping to capitalize Saturday with the opportunity to run up front at the restrictor plate track.

“Chaos on Lap 29,” Wallace said. “It’s crazy, but it’s just part of it. You have to deal with some of the guys trying to win the stage and get some points, which is all good, but you still have to be mindful of what’s going on. We were just biding our time and holding our own. It just didn’t work out for us.”

With NASCAR’s new policy, one which prevents drivers from returning after going to the garage following a wreck, the DNF total from these crashes increased. There were a total of 13 cars out of the race after these two major incidents. – Joseph Wolkin

If the Chase hasn’t killed NASCAR, these absolute ridiculous 5 minute clocks/go to the garage your parked/ too many men over the wall your parked/////////////STUPID STAGES certainly will.
PS :too many rich kids who can’t drive in the Xfinity race today. Last Xfinity race I ever watch this year.

I don’t even know why they inspect these cars at Daytona if they just end up in a pile of rubble. In way over their heads and not a lick of experience at plate tracks. How much younger is n$car going to let these kids enter Daytona races? 16? 15? 14? 13?…

Judging by the wrecks in both the Truck and AAA series, Brian must think he’s passed out and dreaming. If it’s the same in the Monster Energy “race” it’s just what he wanted when he made the changes to the “product”.

That’s provided he’s at the track and not in some bar watching college basketball because they won’t show the “product”.

The Owners can’t continue to bankroll this wreckfest.

Too much dead air time waiting to clean the track.

Did not watch it. The Nashville Predators defeated the NHL leading Washington Capitols in spectacular fashion. It was on Fox Sports Tennessee. Ironically I only get FSTN because I was forced to upgrade DirectTV years ago to get the Fox/NBC secondary channels in order to watch na$car.