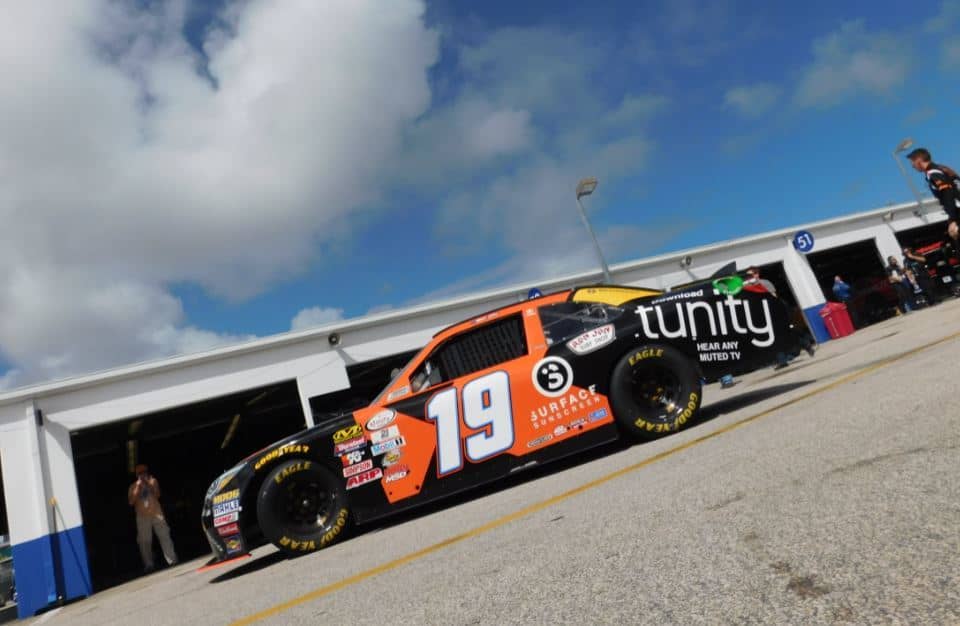 Coming back to Daytona International Speedway for the first time since undergoing surgery for a low-grade glioma in the brain last July, Matt Tifft is ready to start his first full-time season in any of NASCAR’s top three touring divisions.

TIfft, 20, is taking over the No. 19 Joe Gibbs Racing Toyota, replacing reigning XFINITY Series champion Daniel Suarez, who moved up to the Cup Series replacing Carl Edwards. The new JGR development driver is stepping into one of the best machines in the XFINITY Series.

Though Tifft is a rookie, and there are no set expectations, JGR won 19 of the 33 XFINITY Series races in 2016, including three from his protege in the No. 19 car.

“You saw with Daniel, his progression over the last two years and the job he did,” Tiffy told Frontstretch.com on Friday. “In my shoes, I’m trying to go out and do what he did because if I can progress the way he did and compete in the top five like he did, I can start getting wins from that point. That’s my goal for this year is to be able to do that and we’ll see at mid-season how we are doing and what the rest of the year looks like at that point.”

Over the off-season, JGR shrunk from two full-time XFINITY Series regulars to putting all of its resources behind Tifft. Other Cup Series drivers will fulfill the Nos. 19 and 20 cars for the majority of the 2017 season.

Tifft is coming off a season in which he saw action in 10 XFINITY Series races for JGR, finishing a season-high fifth at Kentuck Speedway, his first race back from brain cancer. In the remaining nine races, he had four other top-10 finishes, with an average finishing position of 16th.

In order to improve on his abilities, Tifft has watched race video from Suarez and Erik Jones, who also moved up to the top division of NASCAR to compete for Furniture Row Racing, an affiliation team to JGR. He has also gone to 2015 Cup Series champion Kyle Busch for advice.

Suarez and Jones have been around NASCAR as long as Tifft, but have been able to break the mold at a quicker rate. Moving through the ranks together has helped them perform on the track as their friendship has been built upon.

“Daniel is a huge student of the sport,” Tifft said. “He’s so good at asking for information and Erik is so talented. It’s interesting talking to those guys because Daniel takes an inadequate approach on things and he wants to know everything about it. Erik is so talented that he just has an amazing feel for the car.

Joe Gibbs Racing drivers have won two driver championships since entering the series in 1997 with Bobby Labonte. The organization has 131 total wins in 1343 starts, including 122 triumphs since Busch joined the team in 2008.

For that reason, JGR’s representation in the XFINITY Series over the past decade is to win. For Tifft, his relationship has built with Coach Gibbs since entering the sport three years ago.

“The biggest thing from him [Gibbs] and the organization is that they believe me and they’ve given me the confidence I need to go out there and not put too much weight on my shoulders right away,” he said. “It’s going to be a learning process. They want me to go out there and do the best job possible, making sure I’m using the resources I have and utilizing them the most to try and build the best team chemistry I can so that we’re on the same page very week.”

While Suarez struggled at the beginning of his tenure in the No. 19 car, Tifft hopes to avoid that trouble with a returning Scott Graves as crew chief. The end goal for the Ohio native is to move up the ranks as quickly as possible, landing himself a Cup Series ride.

Replacing the XFINITY Series champion comes with its positives and negatives for race teams. The last five XFINITY Series champions are enrolled in a full-time Cup Series team entering the 2017 season. Ricky Stenhouse Jr. was replaced by Trevor Bayne when he made the jump to the top division of NASCAR. Ty Dillon replaced 2013 series champion Austin Dillon, and in three full-time seasons has accumulate one victory. In 2015, Chase Elliott was unable to win back-to-back titles. After Chris Buescher won the title in 2015, Roush Fenway Racing had a best championship finish of sixth in 2016.

Tifft doesn’t to be the next driver to fail replacing the XFINITY Series champion.

“Everyone at JGR thinks they are part of a family,” Tifft said. “Coach implements that from the top down. He’s someone you want to go out and perform for and be at the top of your game for him because he respects everybody, but demands that type of performance from everybody. You want to be one step ahead of everyone else just to perform for him.”