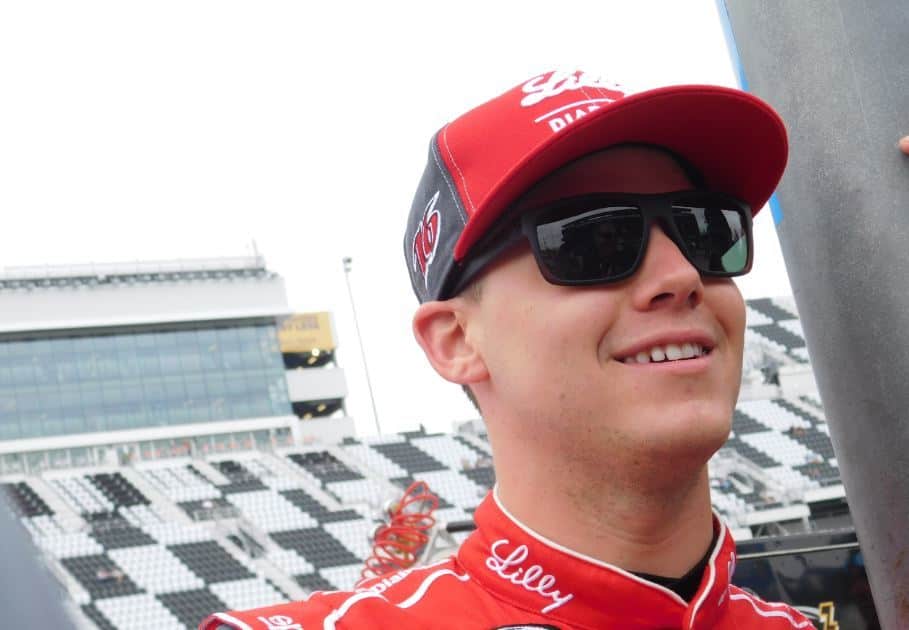 He did it again.

For the second time in the last three years, Ryan Reed has won at Daytona International Speedway in the XFINITY Series. Holding off Monster Energy NASCAR Cup Series talents Kasey Kahne and Austin Dillon, Reed earned his second career win after starting from the front row.

“I tried to apply everything I’ve learned and done wrong,” Reed said. “I thought if I could run two perfect laps and throw as many blocks as it took that we would be standing [in Victory Lane]. Man, this is what we work for.”

Second-place Kahne was one of only three cars who was not involved in one of the race’s many savage accidents.

“I was pretty lucky,” said Kahne, who will start 26th in Sunday’s Daytona 500. “We ran up front most of the race and the wrecks were behind us. Yeah, there were a lot of them early on.”

Indeed, the Powershares QQQ 300 was littered with wrecked racecars and bent budgets. Kicking off with the first Big One on lap 22, Tyler Reddick got spun and collected nearly a dozen racecars on the backstretch.

Before the drivers had a chance to calm their nerves, pole-sitter Brandon Jones was turned head-on into the Turn 4 wall after contact with Scott Lagasse Jr. on lap 28. That accident swallowed up Daniel Hemric, Erik Jones, Daniel Suarez, Spencer Gallagher and more.

As day turned to night, the attrition continued to rise, with Brennan Poole, Ryan Sieg, Aric Almirola and others falling out of contention.

Elliott Sadler was among the top dogs of the event, leading a race-high 39 laps in his JR Motorsports Chevrolet. Despite putting on a show in the closing laps, battling and trading he top spot with fellow veteran drafters, the aggression bit the Virginia native with 16 laps to go.

The rest of the top 10 had numerous underdog performances, per usual in most plate races. Scott Lagasse Jr. came home sixth followed by Joey Gase with his second career top-10 finish in seventh, Garrett Smithley with a first top 10, William Byron in his first XFINITY race in ninth and Harrison Rhodes, who captured his second Daytona top 10 in 10th.

“To end up 10th, man, what a stellar night for our team,” Rhodes said. “That first segment was nuts. People crashing everywhere. We are pretty clean, not too bad. We got some momentum going forward.”