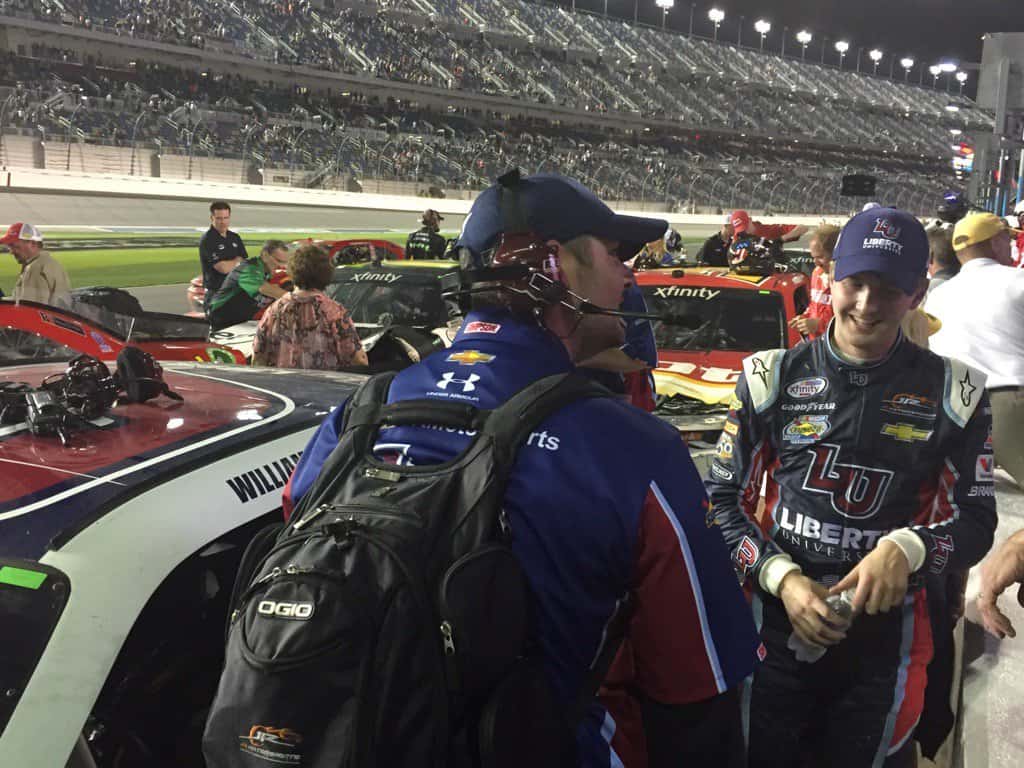 William Byron sat on pit road with his JR Motorsports crew with a giant smile across his face, ecstatic to start his NASCAR XFINITY Series career with a top-10 finish.

His brand new No. 9 Chevrolet came home relatively clean compared to teammates Michael Annett and Elliott Sadler, who each ended the evening with battered racecars. Though he was involved in a wreck with two laps to go, the rookie managed to survive the chaos during the Powershares QQQ 300 at Daytona International Speedway to finish ninth in his XFINITY Series debut.

“No one ever gave up on our team, so Earl [Barban, spotter] was just saying that if we can get the laps back, we’ll be alright,” Byron said. “Once we got a couple back, we were OK. It wasn’t ideal, but he helped a lot.”

Byron’s day started with a run to the front of the field at the start of the race. By the end of Stage 1 on Lap 30, he considered himself lucky to still be on the racetrack after a 19-car incident caused a lengthy red flag.

But with time on the No. 9 team’s side, they managed to work their way through the top 10 immediately after the wreck. And by Lap 36, the 19-year-old led the XFINITY Series field for the first time.

“It was fun,” Byron said. “I think we led a few, so it was fun. It’s a lot different compared to anything. We need to keep working for June and definitely do better.”

But the top 10 did not come easy for the young man who won a record seven Camping World Truck Series races as a rookie last year.

While running in the lead pack, Byron rapidly fell off the pace. Suddenly, his red, white and blue Chevrolet went from the America dream to the American Debbie Downer.

Said Byron, “The battery went dead, and we just had to go through that, got a couple of laps down and came back from it.”

For multiple laps, the car circled around the track several seconds slower than the leaders. At first, he believed it was an engine issue before the team made the official diagnosis when he arrived on pit road in the midst of a green-flag run that put him one-lap down.

As Byron received the free pass, he strategically moved through the field, taking his time to work through traffic.

But with two laps to go, after putting himself in a top-five position, everything looked like it would work out for Liberty University student. However, that’s when he went to class.

“There were a couple of times we got in good positions,” Byron said. “Then, the [No.] 07 got turned to the outside. I thought he was coming to the inside and just over-judged and spun out there. Other than that, it was pretty decent.”

During an intense two-lap overtime run to the checkered flag, he managed to finish in the top 10, an achievement he feels could have been even better had it not been for the incident with Ray Black Jr.

“We had great horsepower,” Byron said. “It sucked up pretty well. We just need to be more aggressive next time around.”