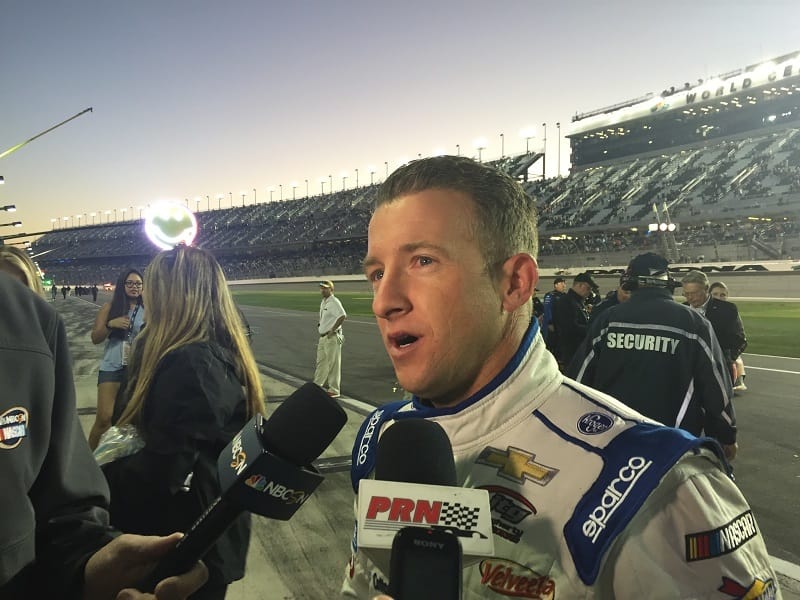 AJ Allmendinger was all smiles and jokes after the 59th running of the Daytona 500.

The charismatic racer couldn’t contain himself on pit road following a third-place finish in NASCAR’s version of the Super Bowl.

“It was just a solid day,” Allmendinger said. “Resilient. We didn’t have a great car. We tried to figure out whether or not we wanted to get points in between the stages. It was resilient. It’s what we always are.”

Allmendinger started 38th for Sunday’s race, but methodically worked his way through the field. He avoided multiple wrecks on the day, being one of a handful of drivers to not get involved in an incident throughout the 200-lap race.

The podium result is the second time in Allmendinger’s career that he finished inside of the top 5 in the sport’s biggest race. In 2009, he finished third with a late-race charge to the front of the field with his Richard Petty Motorsports car.

“It’s just a solid start to the season, but there’s 35 races in the season,” he said. “I’ve had a great Daytona 500 before and then everything fell apart. This is a big race. It just gives us confidence. We have a good start, so we don’t feel like we need to press now.”

For the first time since joining JTG Daugherty Racing, Allmendinger was not alone on the racetrack. While he has been a benefactor of having an alliance with Richard Childress Racing, he never had a teammate.

The organization expanded to two cars in 2017, adding Chris Buescher to its lineup. Just one race into the year, the impact is already being seen.

“Chris was working with me early in the race,” Allmendinger said. “Where ever I went, he went. Then, we got separated, but I thought we might get back together. But Chris Buescher, he’s an XFINITY champion and won a Cup race. I’m going to learn a lot from him.

It’s a restrictor plate race. The drivers say “Hello” to the real races starting in Atlanta. At least until Talladega.

Hope it’s not too cold.