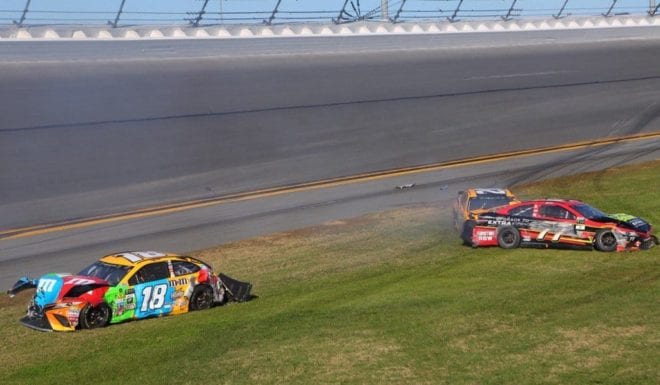 The first half of the Daytona 500 avoided the big wreck.

The second half? It took just four laps.

On Lap 104 in the 59th Great American Race, Kyle Busch‘s right rear tire went down right in front of a crowd of racecars.

Busch, winner of the first Monster Energy NASCAR Cup Series stage had no warning that the tire was going flat entering Turn 3. The No. 18 car then collected Erik Jones, Matt Kenseth, Ty Dillon and race leader Dale Earnhardt, Jr. All but Dillon ended up out of the race.

Busch, once reached in the garage area further expressed his disappointment.

“I wish I would of, I would have waved off as many guys as I could,” Busch said to Fox Sports. “It happened as soon as we picked up load turning into Turn 3. It just spun around. I actually felt like I hung on to it for a long ways and then finally it went down.”

“We tore up three JGR cars in one hit and tore up Junior,” Busch said. “I feel horrible for those guys. Nothing that we did wrong. I guess Goodyear tires just aren’t good at keeping air.”

As for Earnhardt, his first race back ended prematurely when he was running with the leaders. The confidence of NASCAR’s Most Popular Driver remains high, based on the strength of his No. 88 team throughout Speedweeks.

. @DaleJr: "I had a good car, boys. Sorry about that for ya. I was having a good time today." #NASCAR #Daytona500 #daytonaday

The race was put under the red flag on Lap 108, where Elliott Sadler is the race leader.