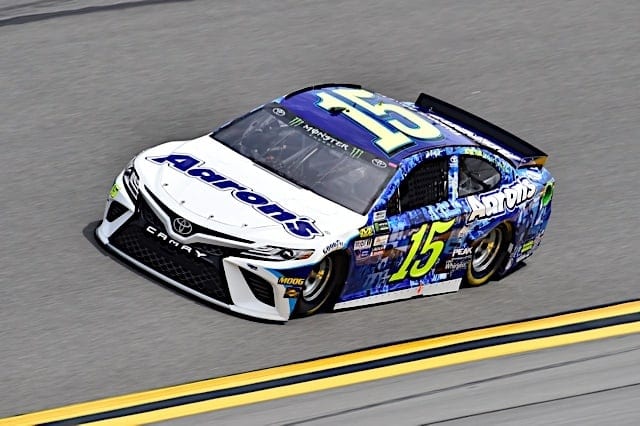 “It’s just a nice way to say thank you.”

As Michael Waltrip attempted to catch his breath and wipe the sweat off his face on pit road at Daytona International Speedway, he took a moment to look around, reflecting on his 32-year career in NASCAR’s premier division after finishing it off with a top 10.

“I’m thankful I survived,” Waltrip said of his final ride. “I’m thankful I ran up front. I’m happy about the finish. I’m ready for it to be the last one. It’s going to be a good one to remember it by.”

Waltrip announced in January that this year’s running of the Daytona 500 would be his final race. The 53-year-old has been moonlighting in the Monster Energy NASCAR Cup Series since 2010, when he hung up his helmet from full-time competition.

Running with Premium Motorsports, sponsored by longtime backer Aaron’s Waltrip’s day got off to a quiet start. He began the race 30th, hanging around that position for much of Stage 1.

As the intensity picked up, the veteran went against what is typically his strategy at restrictor plate races over the past eight seasons. His Toyota is usually seen roaming around the back of the field, waiting for wrecks to happen so he doesn’t damage his car and has a chance to compete at the end.

However, Sunday’s race was different.

“It’s going to be a great memory,” he said with an enthusiastic tone. “I felt like so many times, I was in the middle of a crash and I missed it. You do a good job and get lucky. At the end, I just lost the draft, and that’s unfortunate because I was able to weave my way past people. I had a really good-handling car.”

Waltrip ended the evening with an eighth-place result, his first top 10 since Daytona in July 2013. Not only did he earn the 133rd top-10 finish in his 784-race career, but he did so by coming out as the highest-finishing Toyota driver. That came full circle as the replacement for when Waltrip retired full-time, Martin Truex Jr., ran out of gas in the closing moments of race while battling for the lead.

For Premium Motorsports, Waltrip’s top 10 is the team’s first in 107 starts. Team owner Jay Robinson began the Cup organization in 2014, expanding with the acquisition of Phil Parsons Racing in the middle of the 2015 season. They’ll still run two cars in 2017, likely putting Derrike Cope in Waltrip’s ride for multiple races after Daytona.

But now, it’s time for Waltrip to get back into the Hollywood Hotel, running around pit road before races to do his “Grid Walk” and bringing his unique personality to the Fox Sports booth for Cup races. A career that started in 1985 and included two Daytona 500 wins, 2001 and ’03 has officially come to an end.

“This time, they let me have one last run,” Waltrip said. “It was nice. I haven’t been emotional at all. I’m just looking at this as a technicality because I was almost done anyway.”