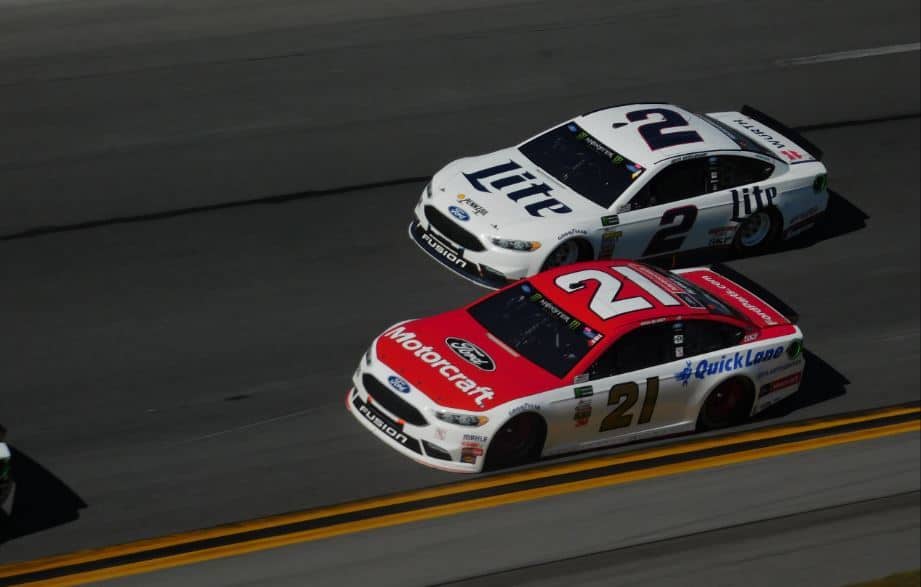 When the small pack of remaining cars crossed the start/finish line for the white-flag lap, it looked like Ryan Blaney had no chance of winning the 59th annual Daytona 500.

But that’s when this sophomore flashed the potential so many insiders have seen in him. With a push from Team Penske affiliate Joey Logano, he pushed himself right into the battle for the win coming through Turns 1 and 2.

It was the closest Blaney had come to the front that late. If it weren’t for Logano falling back, a move that forced him to work with the slower AJ Allmendinger he might have wound up in Victory Lane. It would have been a fairy tale story for the Wood Brothers; the last such winner was Trevor Bayne, in 2011 who also piloted the No. 21 Ford.

“It took longer to get going than I thought,” Blaney said, after the lead pack spent much of the last 30 laps single-file. “I tried with 10 to go and didn’t go anywhere. We were kind of stuck and then we had the [No.] 22 with us and I would kind of help him and then he would help me. We got a big run into one and then we kind of all separated and I got a big pull off of that.”

Blaney thought that falling back to Allmendinger would help both cars, due to the old saying “two cars are faster than one.”However, when the No. 21 car was going down the backstretch, it began to run out of fuel as did other drivers such as Kyle Larson, Martin Truex Jr., Chase Elliott and Michael McDowell.

“The [No.) 41 was really far out there and I thought I would lay back to the 47 and get a big run,” Blaney said. Then I started sputtering and running out of gas and I think everyone was on fumes. It was close.”

Blaney began the Daytona 500 shotgun on the field after he crashed in the second Can-Am Duel race Thursday evening, a wreck that resulted in pulling out the back-up car. Within the first 15 laps of the race, the No. 21 car zipped to the front, quickly running inside the top 10.

“Early on, we made a lot of ground up,” Blaney said. “That gave us a lot of confidence and we ran pretty well the first half of the race.”

But on Lap 137, Blaney’s day took a bit of a turn after he waved to the competition behind him, letting them know he was coming to pit road.

Elliott Sadler, the driver directly behind also put his hand out the window hoping to get the attention of the entire inside line. Jeffrey Earnhardt missed the signal, hitting Sadler, spinning Bayne and Ricky Stenhouse Jr. into the inside wall.

Blaney got involved, too but only received minor damage. On a day where the field looked more like a junkyard of rusted sheet metal, rather than wind tunnel-tested machines that wound up being good enough.

“There was only a handful of cars out there that looked OK at the end,” he said. “My whole right side is torn up, I haven’t seen it yet. We got caught up in that wreck in Turns 3 and 4, I thought we missed it. Luckily, we were able to fight back. The team did a great job of fixing the racecar and getting it to where we needed it to be to finish the race.”

Blaney heads into Atlanta Motor Speedway sitting second in the championship standings, a career-high for the 23-year-old. The No. 21 car earned a total of 44 points and sits 12 points back of Daytona 500 champion Busch.

Last year, Blaney finished 25th in his only career start at Atlanta. But his carer-high second-place finish at Daytona gives The Wood Brothers momentum heading into the rest of the season.

“It was a solid day for us,” he said. “We had such a good car for it being a backup car. It’s not what we wanted, but it’s a good start to the season.”