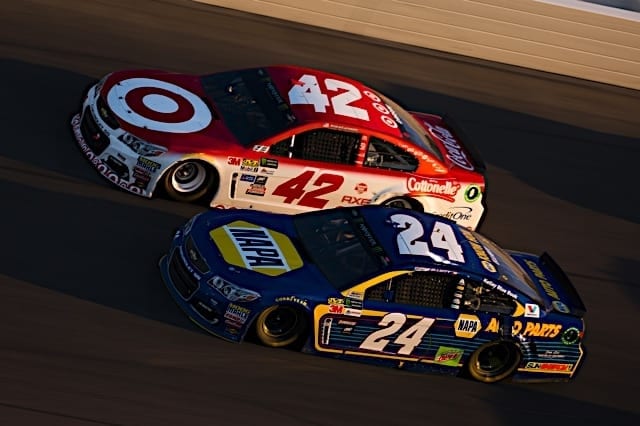 Michael Waltrip spent the majority of his final NASCAR race near the back of the pack. His No. 55 Aaron’s Toyota didn’t seem to have the raw horsepower to contend for the win, but it did have the perseverance to outlast most of the competition.

With most of the favorites in the field knocked out of contention due to various multi-car accidents and the race ending with a 47-lap sprint, Waltrip ended up finishing eighth after not running out of fuel on the final lap.

Waltrip, the namesake of Michael Waltrip Racing, which was one of Toyota’s inaugural Cup Series teams, ended up being the highest-finishing Toyota driver in the sport’s biggest race.

“I was in the middle of every wreck it seemed like,” Waltrip said. “We were able to just sneak our way through, when Ryan Blaney had his problem off Turn 4 we were the only ones to make it through.

“Wow, it just was a fun day… I don’t like it to be about me, and it’s been a chance for people to say ‘Hey man, we appreciate you, you did a good job for 30 years and we’re proud you got to go out on your own terms.’”

Waltrip retires with four Monster Energy NASCAR Cup Series wins in 784 starts. His two most notable wins were the 2001 and ’03 Daytona 500’s. With his first start in 1985 and his final start in 2017, Waltrip’s career was one of the longest in series history.

This was up there with the 2012 Daytona 500 when it came to just how crazy it was looking back. At times, it seemed like the race wasn’t taking place at the Daytona International Speedway, but instead at Dale Earnhardt Jr.’s “car graveyard.” It was a capper on a pretty crazy Speedweeks itself, with just about every car that started in either NASCAR or ARCA the last two weekends getting at least some crash damage. It felt like watching a war, not a race.

One constant of the Atlanta Falcons this last NFL season was that at the end of every first half, coach Dan Quinn stressed to his team that the second half was a “reset”. As NASCAR heads to Atlanta for the first race weekend of the season without restrictor plates and with the new low-downforce aero package, it’s time for everybody to calm down and “reset”.

This weekend coming up will be the unofficial first race of the season; outside of points, what happens in Daytona largely stays in Daytona. The Stewart-Haas Racing cars looked strong during Speedweeks, but we don’t know if they are going to be just as good in the 32 non-restrictor plate races this year. We’re not going to know how well these stages will work outside of Daytona and Talladega until the end of the first stage in Atlanta. Finally, we’re not going to know just how fast this rookie class is until the end of another 500 miles; both Erik Jones and Daniel Suarez were victims of bad strategy and bad luck, while Ty Dillon got taken out in an accident.

Where… did the pole-sitter and the defending race winner end up?

Chase Elliott led much of the final 30 laps but ran out of fuel on the backstretch with just three laps to go and finished 14th. Like most of the top finishing drivers, Elliott had to battle back from adversity; he got a piece of two accidents, one on lap 142 and one on lap 150. After the lap 150 incident, Elliott battled back up to the lead on the ensuring restart and set up the finish of the race.

The Toyota drivers of Joe Gibbs Racing and Furniture Row Racing had strategy calls blow up in their face all day long after dominating this race last year. The six drivers short-pitted right on the edge of their fuel window in the first two stages; in the first stage three of them had to serve pit road penalties and in the second segment, three ended up in a multi-car accident their ended their day. Denny Hamlin, defending champion of the Daytona 500, was able to steer clear of the problems of his teammates in the first two stages, but was involved in two wrecks early in stage three and finished 17th after lengthy repairs.

It was a relatively tame race compared to the last two days of racing at the “World Center of Racing” until lap 104. Kyle Busch blew a right-rear tire with no warning going into Turn 3 and collected teammate Matt Kenseth, fellow Toyota driver Erik Jones, and race favorite Earnhardt. None of the four drivers were able to continue, and after a red flag that lasted more than 15 minutes, it set up four more multi-car wrecks over the next 50 laps.

On lap 128, Trevor Bayne turned Jimmie Johnson in Turn 3 and collected 17 cars. On Lap 136, Bayne, Ricky Stenhouse Jr., Blaney and Elliott Sadler were involved in an accident on the frontstretch after Sadler failed to slow down for Blaney as he came down on pit road. Jamie McMurray tried to pass Elliott on the backstretch, mistimed the pass and caused an 11-car accident on Lap 142. Finally, Elliott got into Joey Gase on Lap 150 and also collected Brendan Gaughan in the backstretch spin.

These accidents took out great cars, damaged just about everybody else and set the stage for a great finish.

Why… did Kurt Busch win?

It seems weird to say, but Kurt Busch is one of the most experienced drivers in the Cup Series this season. The move he made to get around Kyle Larson in Turn 2 of the final lap was simply experience trumping exuberance.

Sure, Busch had never won a Cup Series points race at Daytona or Talladega Superspeedway. But as a former winner of both The Clash and the Daytona Duels, Busch was easily the best driver in the Cup Series without a points win on a restrictor plate track before today. It was only a matter of time that the 2004 series champion would find Victory Lane in one of these races.

Busch was also able to outlast his competitors on fuel millage. Unlike Martin Truex Jr., Elliott or even Larson, Busch was able to hold on to just enough fuel to win a Daytona 500. After all of the talk about the chances of a fuel millage race dramatically going down due to the stages, the race ended up partially coming down to fuel millage.

How… about some of these small teams?

Waltrip wasn’t the only feel-good story coming out of this race. With 15 cars not finishing due to crash damage and others throughout the field struggling with minor crash damage, many unexpected drivers ended up with excellent results.

Matt DiBenedetto started off his first race with Go FAS Racing with a ninth at Daytona, a good way to start his full-time season in the No. 32 Ford. Unlike Go FAS Racing, Mark Beard’s race team has never raced in the Cup Series and has no more scheduled races this season. Despite this, Gaughan was able to bring the team home in 11th. Michael McDowell ran top five for most of the final stage and ended up 15th, matching his 500 result last year. Finally, Cole Whitt led some laps in his new full-time No. 72 Ford for Tri-Star Motorsports and ended up finishing 18th.

First of all, lite in the loafers Waltrip was driving #15. Second, we now have a pretty good feel for who his lover is.

Third of all, Bayne did not turn Johnson into turn 3. McMurray got into Johnson down the back stretch, moved his car to the left and as such the 48 car technically hit the 6 car not the other way around. The article should have read Johnson involved in multicar accident due to bump draft by Jamie McMurray not implicate Trevor Bayne who did absolutely nothing wrong as until McMurray “turned” the 48 there was a full opening for the 6 car to use on track.
Please get facts straight and acknowledge what actually happened and how versus throwing out what can be perceived as blame on a driver that had little to do with how the situation was unfolding.

It could be a long year for the Cup series. With all the young, inexperienced drivers getting pushed full time in Cup rides this year, I anticipate alot of wrecks and alot of long races. Watching the 500, I wondered if some of these guys even deserve to have rides so soon. So far this “youth movement” with the exception of a few, does not impress.