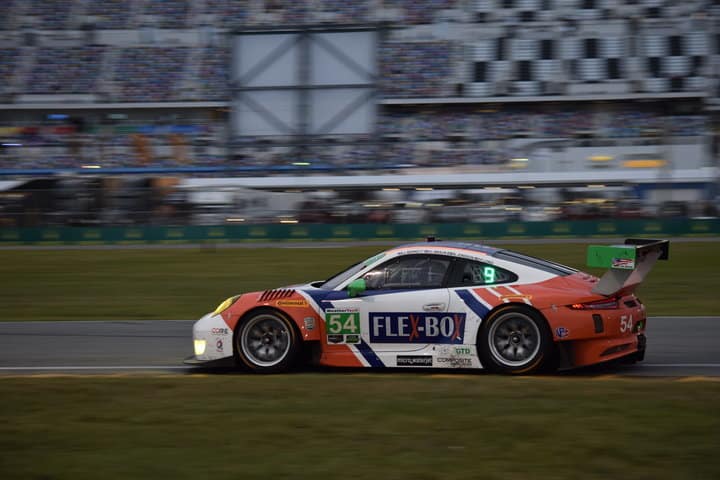 Thursday and Friday, teams from the IMSA WeatherTech SportsCar Championship took to 3.74-mile Sebring International Raceway for 15 hours of testing ahead of next month’s Mobil 1 12 Hours of Sebring. For most of the teams, it was their first chance to test out new Balance of Performance guidelines that were designed to bring the Cadillac DPi-V.R.’s closer to the rest of the field.  Despite the changes, the Cadillacs are still very fast, the team to beat even after testing wrapped up.

The DPI-V.R.’s were fast from the drop of the green flag on Thursday morning.  Action Express Racing’s Dane Cameron was fastest in the first session with a lap of 110.076 seconds (122.315 mph).  The other two Cadillacs, piloted by Joao Barbosa and Alex Lynn, were close behind.  Olivier Pla, pressed into duty for the test with PR1/Mathiasen Motorsports, was the fastest of the rest in fourth.  JDC/Miller MotorSports’ Stephen Simpson was fifth in the No. 85 ORECA 07-Gibson.

The second session saw the first lap of the weekend below 110 seconds.  That was turned in by Action Express Racing’s Filipe Albuquerque in the No. 5 Cadillac.  Albuquerque’s lap of 109.759 seconds (122.669 mph) was nearly a half-second faster than Jordan Taylor in the No. 10 Wayne Taylor Racing Cadillac.  For Lynn and Jordan Taylor, they had to pull a little extra weight since Ricky Taylor was not present on Thursday.  Ricky was busy testing a Chevrolet-powered Dallara DW12 for Team Penske at Homestead-Miami Speedway.

Eric Curran was over a second slower than Albuquerque in third in the second Action Express entry.  Pla was fourth quickest and Simpson was fifth.

Sunday morning’s third session saw the fastest laps of the weekend.  Jordan Taylor turned in the fastest overall lap to top session No. 3.  The lap of 109.500 seconds (122.959 mph) was just half a tenth faster than Action Express Racing’s Albuquerque.  Cameron was close behind in third.  Simpson was fourth quickest in the No. 85 ORECA 07-Gibson, while Pla was fifth.  Jordan Taylor’s fast lap in session No. 3 was more than 1.6 seconds faster than last year’s overall pole time, set by Pla.

The final session saw newcomer Lynn top the charts with a lap of 109.830 seconds (122.589 seconds).  Lynn will be Wayne Taylor Racing’s third driver at Sebring and Road Atlanta, replacing the retired Max Angelelli.

Lynn’s lap was one-sixth of a second faster than Cameron in second.  Barbosa was third quickest, followed by Tequila Patron ESM’s Pipo Derani in fourth with the No. 2 Nissan DPi.  José Gutierrez was fifth quickest in the PR1/Mathiasen Motorsports Ligier JS P217.

In the spec prototype class, only two cars showed up at the test.  Both Starworks Motorsport and BAR1 Motorsports sent one ORECA FLM09-Chevrolet each to the test.  Starworks Motorsport’s entries struggled terribly in Daytona, but their No. 8 seemed to find the pace quickly in Sebring.  Scott Mayer was fastest in the first session with a lap of 116.713 seconds (115.360 mph), 1.5 seconds faster than Gustavo Yacaman.

In the second session, new addition Chuck Quinlon turned in the fastest PC lap of the weekend with a lap of 116.120 seconds (115.949 mph), once again more than a second faster than Yacaman.

Day No. 2 saw Mayer once again fastest in the third session, but only by .153 of a second over Yacaman.  BAR1 Motorsports’ No. 26 topped the chart in the final session with 2014 IMSA Porsche GT3 Cup USA champion Colin Thompson at the wheel.  However, it should be noted that Starworks Motorsport declined to participate in the final session.

The hallmark of the GT Le Mans class in recent years has been how close it is between the various manufacturers.  Sebring was no different.

BMW Team RLL’s Alexander Sims was fastest in the first session with a lap of 119.183 seconds (112.969 mph) in the team’s No. 25 BMW M6 GTLM (renumbered from No. 19 at Daytona).  This lap was just three-hundredths of a second faster than Ford Chip Ganassi Racing’s Ryan Briscoe in second.  Corvette Racing’s Tommy Milner was third fastest, followed by Ford Chip Ganassi Racing’s Joey Hand in fourth.  Corvette Racing’s Jan Magnussen rounded out the top 5.  The top 7 in class were separated by just over a half-second.

The second session saw Ford Chip Ganassi Racing’s Dirk Müller go to the top of the charts with a lap of 118.894 seconds (113.244 mph), a quarter of a second faster than teammate Richard Westbrook.  Risi Competizione’s James Calado was third fastest, followed by Sims and Corvette Racing’s Antonio Garcia.

On Friday, one of the bigger stories was that Juan Pablo Montoya turned in some laps in Risi Competizione’s No. 62 Ferrari 488 GTE.

The 41-year racer has only a one-off in a fifth Team Penske entry at Indianapolis inked for 2017, so he jumped at the opportunity to turn some laps.  Montoya turned in 15 laps and ended up about 2.5 seconds off the pace.  It should be noted that while Montoya does have sports car racing experience (he’s a three-time overall winner of the Rolex 24 at Daytona), but all of those races have come at the wheel of Riley Daytona Prototypes.

On Friday, Magnussen turned in the fastest GTLM lap of the test during the third session with a lap of 118.525 seconds (113.596 mph).  That lap was just six-thousandths of a second faster than Porsche North America’s Dirk Werner in the No. 912 Porsche 911 RSR.  Briscoe was just a tenth of a second further back in third, followed by Hand.  Sims rounded out the top 5.

In the final session, Ford Chip Ganassi Racing’s Sébastien Bourdais was fastest in the No. 66 Ford GT by one-tenth of a second over the No. 912 Porsche of Patrick Pilet.  Risi Competizione’s Toni Vilander was third fastest, followed by Garcia and Briscoe

In GT Daytona, CORE autosport showed speed immediately, something that the team needs after failing to finish the Rolex 24 for the third year in a row.  Colin Braun set the fastest time in the first session with a lap of 122.691 seconds (109.739 mph) in the No. 54 Porsche 911 GT3 R pictured above.  That lap was four-tenths of a second faster than Stevenson Motorsports’ Lawson Aschenbach in the No. 57 Audi R8 LMS GT3.  Park Place Motorsports’ Jörg Bergmeister was third in another Porsche followed by 3GT Racing’s Jack Hawksworth and Montaplast by Land-Motorsport’s Connor de Phillippi rounding out the top 5.

Back in Daytona, Spencer Pumpelly was unable to get a ride for the Rolex 24 at Daytona.  However, he joined up with Alegra Motorsports behind the scenes and helped guide them to the class victory.  This past week, Pumpelly got another opportunity to test the team’s No. 28 Porsche and made the best of it.  Pumpelly topped the charts in session No. 2 with a lap of 123.172 seconds (109.311 mph).

Pumpelly’s lap was one-sixth of a second faster than Bergmeister in second, while Alex Job Racing’s Townsend Bell was third quickest in the No. 23 Audi.  Montaplast by Land-Motorsport’s Christopher Mies was fourth fastest, followed by Stevenson Motorsports’ Andrew Davis.

Session No. 3 on Friday morning saw more of the same.  Braun was again fastest with a lap of 122.476 seconds (109.932 mph), the fastest GTD lap of the test.  The lap was two-tenths of a second faster than Mies in the No. 29 Audi.  Davis was third fastest, followed by Bergmeister and Pumpelly.

The final session saw Aschenbach on top of the charts with a lap of 123.003 seconds (109.461 mph).  That lap was eight-hundredths of a second faster than De Phillippi in the No. 29 Audi.  Paolo Ruberti in the No. 27 Lamborghini Huracan GT3 for Dream Racing was third quickest, followed by Mirko Bortolotti in the No. 11 Lamborghini for GRT Grasser Racing Team.  Sage Karam in 3GT Racing’s No. 14 Lexus RC F GT3 was fifth.