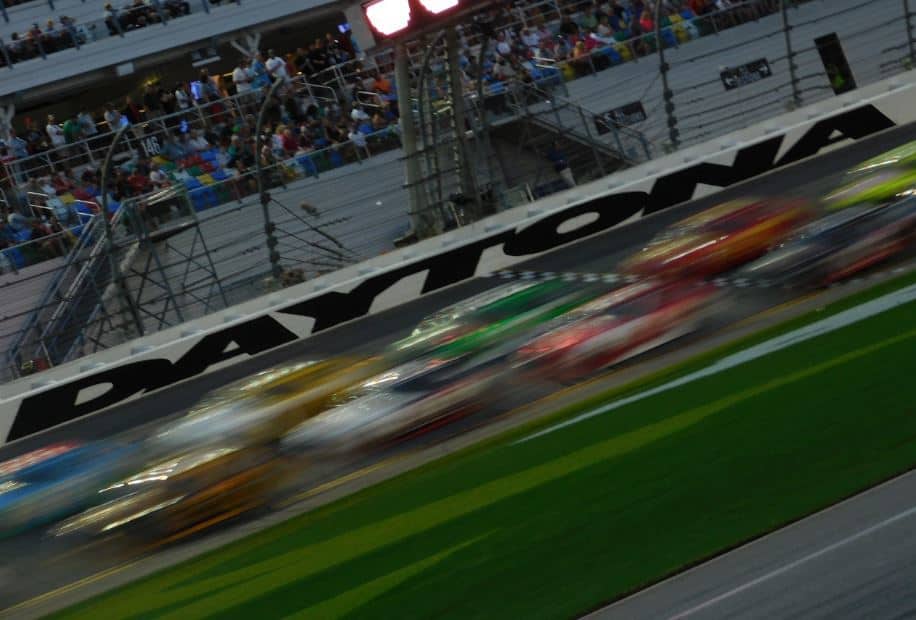 Ryan Reed lived up to what arguably is his strong suit inside of a racecar on Saturday, perform-well on restrictor plate tracks.

The fifth-year driver picked up his second-career win at Daytona International Speedway, also winning at the World Center of Racing in 2015. However, this one was well-earned after being involved in the trio of big wrecks that retired half the field.

“I knew if I was there at the end it doensn’t matter where you are at, you will have a shot,” Reed said. “Everyone was so aggressive. This new format is breeding a lot of aggression, there is a ton of incentive.”

Reed led nine laps on Saturday, more laps than he led in all of 2016. The No. 16 team is most likely locked into the playoffs after posting Roush Fenway Racing’s first XFINITY Series victory since Chris Buescher was triumphant at Dover International Raceway in May 2015 en route to winning the series championship.

The victory was Reed’s fourth career top-five finish, three of which have come at Daytona where he has been out front for 23 of his total 62 career laps led.

JD Motorsports, one of the most underfunded full-time XFINITY Series teams had all three of its cars finish in the top 16, two of which were top-10 finishes.

Garrett Smithley led the charge after being involved in two of the three big crashes, coming home a career-high eighth. His sponsor, Flex Seal, was used on all four corners of the No. 0 machine due to the two crashes. He believes this is what the team needed to boost its confidence heading into the rest of the season.

“The whole race was nuts,” Smithley said. “We tried to buy or time and do what we could, but I don’t know how we ended up eighth. We wrecked about six times out there, but she ran fast. It’s means everything. You come to Daytona and you work so hard, and we have 15 or 16 guys working on three different cars. My goodness, it’s huge to start this year off and we’ll see what we can do the rest of the year.”

Harrison Rhodes finished 10th, recording his second career top-10 finish, the also other coming at Daytona in 2015. Ross Chastain, the third JDM car came home 16th, marking the first time that three of its cars finished in the top 16.

Saturday’s race length was close to 3.5 hours, nearing the amount of time it took the Cup Series to complete 600 miles last May in the Coca-Cola 600 at Charlotte Motor Speedway.

With 16 laps to go, the smallest of three huge crashes delaying Saturday’s race happened when Austin Dillon aggressively pushed Elliott Sadler, turning him into the middle of the field triggering a nine-car incident. Prior to the crash the No. 1 car had led 40 laps, sweeping the first two stages of the race.

“It was go time and you have to be aggressive,” Sadler said. “You’re supposed to be aggressive. You have to to get a win. It’s a shame to see it get torn up. We did get two bonus points toward the Chase so there is my positive spin on it. At least we don’t have nothing to show for it. We can build on that, the car was fast, we can build on that. Accidents happen and we wont hang out heads on it.”

Eventual race-winner Reed was spinning through the infield grass in Turn 3, somehow not tearing apart the splitter. Other key drivers involved was rookie William Byron, who had gone a lap down earlier in the race due to a dying battery. In the remaining laps the No. 9 car came back to finish ninth in his first career XFINITY Series race.

The first wreck was cause when Scott Lagasse Jr. made contact with Tyler Reddick toward the front of the pack, causing a 19-car demolition derby. This crash retired a pair of rookies Spencer Gallagher and Cole Custer to withdrawal from the race after they were unable to drive their cars back to pit road to get on the five-minute clock.

16 teams were put on the five-minute clock due to crash damages. This was the first red flag which halted the race for 18:22.

Five laps later, one lap before the end of the opening stage, Daniel Hemric lost control of his car, tagging Justin Allgaier turning him into the outside wall where he collided with pole-sitter Brandon Jones, shooting him hard into the outside wall. The driver of the No. 33 car admitted that it was the hardest hit of his young career.

This melee put fluid from the beginning of Turn 3 all the way to the frontstretch, turning this red flag into nearly a half-hour long (27:51). Some of the same cars from the first Big One were also involved in this crash and through the first segment only 14 cars had not received crash damage.

Besides JD Motorsports having three of its drivers in the top 16 positions, Joey Gase came home seventh. At times throughout the 300-mile event, the No. 52 car sat as high as fourth, pushing the front car in his lane.

The seventh-place effort marks Gase’s second career top-10 finish. Prior to today, his solo top 10 came at Talladega Superspeedway in 2015 when he finished fifth.

“After the last segment our team decided just to go for it,” Gase said. “And sometimes you get up there far enough where they wreck behind you and sometimes they wreck in the first row. You just gotta go and cross your fingers sometimes.”

Reed was able to outlast three Monster Energy NASCAR Cup Series drivers for the victory. Kasey Kahne attempted to pass the No. 16 car twice on the last lap, coming up short on each.

Ty Dillon restarted third on the final restart, but ran out gas, resulting in a 19th-place finish. However, he will drive the No. 3 for 27 races in 2017, so he will have other shots at a victory throughout the season.

Cup Series rookies Daniel Suarez and Erik Jones were involved in the Lap 29 crash. Both of them were among the Championship 4 last year at Homestead-Miami Speedway, but the other end of Florida hasn’t treated the two drivers as well as South Beach.

“I thought if I could run two perfect laps and throw as many blocks as it took in those laps that we would be standing right here.” – Ryan Reed

“You get practice and learn. I think it takes days off you life running these races, but you definitely have get some experience.” – Austin Dillon

We’re all racing hard to complete that first segment. I got clipped and then, unfortunately, got into the side of the [No.] 33. It’s probably been one of the hardest hits I’ve taken in my career. It was pretty head-on. It’s not the way you want to end your day. That was one of those moments you hate to have in a racecar, but you’re lucky to be able to walk away. – Justin Allgaier

Reed has picked up both of his two career victories in the biggest race of the season for the XFINITY Series. He has a knack for the draft and how it works, which has resurrected himself entering the rest of 2017.

Both of the primary races in the Camping World Truck Series and XFINITY Series has seen chaos, resulting in a ton of torn up equipment and millions of dollars lost from team owners. The new format has proven that on plate tracks every driver is going to give it their all literally from the beginning of the race, hoping to get as many points possible.

The new format rewards consistency, even in plate races. Sadler swept the first two stages, but ended the race in 24th. Earning maximum points throughout the first two segments places him third in the championship standings, 14 points behind Reed.

The XFINITY Series will take to Atlanta Motor Speedway next Saturday in the early portion of the doubleheader with the Camping World Truck Series. The Rinnai 250 is scheduled to go green at 1:30 p.m. ET.