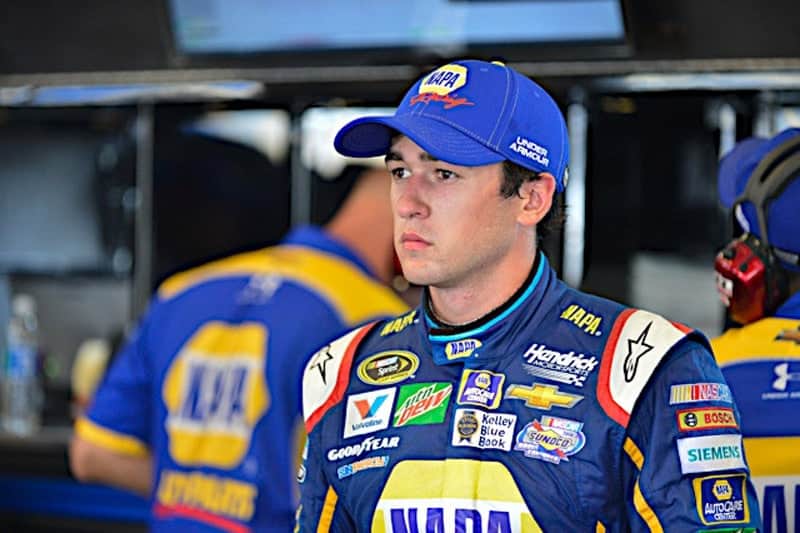 ONE: Chase Elliott’s wins are coming – soon
An otherwise excellent Speedweeks finished in crushing disappointment for the 21-year-old sophomore Hendrick Motorsports driver. After winning his Cam-Am Duel and securing the coveted pole position for the Daytona 500, Elliott lead 39 circuits at the famous two-and-a-half-mile track including 23 of the last 26 laps of the race. In the end his downfall was not the speed of another driver rather not enough fuel as his motor sputtered and he lost the lead fading to a 14th place finish. In the aftermath of the race Elliott took to Twitter to express his frustration:

Lessons learned the hard way today, let's get to Atlanta!

The succinct nine-word summation did little to mask Elliott’s pain of being so close to winning the sport’s marquee race but it was, at least, a measured response to a horrible conclusion. But despite his misery, Elliott can take comfort in the fact that his time is coming. Mark my words, this kid will win races by the bucket load and likely a title or two before he’s said and done in NASCAR. So yes, Chase should feel sadness at what was a missed opportunity but it’s a lot better than not even being close to winning it all. And like I say, there are good things to come and likely in short order– perhaps as soon as next week at his home track of Atlanta Motor Speedway.

TWO: Redemption for Kurt Busch – again
From despair to jubilation and a quick word about the 2017 Daytona 500 winner Kurt Busch who took the checkered flag in the biggest race of them all. Back in 2008, in the 50th running of the Great American Race, Busch dutifully pushed then-teammate Ryan Newman to an epic victory and finished as first loser. Busch also finished second in 2003 and 2005 and third in 2002, so this win has been a long time coming. And the same can be said for his longtime head wrench, the popular Tony Gibson. And on that subject, definitely take a minute to check out Ryan McGee’s excellent ESPN story of Gibson’s Daytona odyssey.

“This moment and feeling of giddiness, a surprised feeling, reminds me of my first win at Bristol in my second year of racing,” noted Busch in the media center, post-race. “It takes you all the way back. You feel like a kid again when you get to Daytona’s Victory Lane.” And no doubt the Monster execs felt that same sense of childish exuberance as the car adorned in their livery crossed the line first. For them, Busch, Gibson and the entire Stewart Haas team it was the perfect start.

THREE: Waltrip retires with a top 10
After 33 years and 784 top echelon races, the ubiquitous pitch man and excitable Fox Sports color commentator and analyst Michael Waltrip finally hung up his driving gloves, concluding his lengthy career with an unlikely eighth-place finish — his 133rd top-10 effort. Waltrip hasn’t run full-time since 2009 and of the 25 races he’s run in the last seven years, 23 have been at either Daytona International Speedway or Talladega Superspeedway. “It’s going to be a great memory to have a top 10,” noted Waltrip post-race. “I had so many times I was in the middle of a crash and just missed it. So, you do a good job and you get lucky both.” It could even have been the most unlikely of victories too, with Waltrip in contention right up until the final laps when he lost the draft in a race that he has won twice (2001 and 2003). And on many levels, it’s hard not to feel happy for Waltrip to end his career with an excellent last run bringing home his beloved Aaron’s Dream machine in one piece.

FOUR: Hotlanta
Next up on the Monster Energy NASCAR Cup Series slate is the first and only trip of the year to Atlanta Motor Speedway. The second race of the nascent 2017 season will be something of a milestone, namely the 2500th Cup race. It will also be the 110th time Cup cars have raced around the lightning fast 1.54-mile quad oval track that belies the “cookie cutter” moniker often assigned to venues of this length. And it’s also a streak of continuous racing that goes all the way back to July 1960 when none other than Fireball Roberts won the first ever race at AMS. You’ll probably not be surprised to learn that Jimmie Johnson holds the record amongst active drivers with five wins two of which came in the last two years so don’t be surprised if we see a three-peat this Sunday afternoon. What’s more important is that we see a good race. Let’s be fair, the sport needs all the positive momentum it can get. Post-race the surface will be ripped up and re-laid – the first time in 20 years this has happened so enjoy this race, folks. Next year might not be as fun.

FIVE: The Great American Race
And finally this week, I was fortunate enough to attend the 500 in person along with two good buddies of mine and what an experience it was for all three of us. Attending any NASCAR race is, for me at least, always a privilege and a pleasure (right up until you sit in hours of traffic trying to get away from the track) and there’s no better NASCAR experience than the Great American Race itself. I hadn’t been to the track since 2008 so I was seeing first hand the incredible job that the track did with the Daytona Rising rebuilding project. It truly is a crown jewel of a venue – one the whole sport can be rightly proud of, that’s for sure. If you haven’t been, find a way to go. You won’t regret it, I promise.

Danny, I had to laugh about your Waltrip-mention. What a non-talent in NASCAR, who rode in on the coat-tails of his brother, JAWS! 784 races and he wins a couple of plate-races? Big deal!

The only thing I remember about him was, even with Kaufman’s millions of dollars spent on a failing-team, from the very beginning (remember those Bill Davis Dodge-prepared junkers he ran in 2006?), then the switch to Toyota and more failures. Remember that first season and the rocket fuel disaster at Daytona, never making a race until about half-way through the season. Oh, did I forget that he lured Dale Jarrett over to MWR and Jarrett ran out of championship provisional points and he also couldn’t make races, either. Jarrett saw the hand-writing on the wall and bailed the part way into the next season. Retirement looked good after trying to drive those rocket ships from MWR. I remember “The Truck” of UPS-fame ran faster than the #44 on any giving week-end.

MWR was the only team I ever heard of that had “hauler-races” after qualifications on any, given, Friday in 2007, after none would qualify. It was a race to see if the 00, 44 or the 55 hauler got back to Chartwell Drive, first!

Then we had the fatal ending of MWR, when he engineered the ending of a critical race and his big sponsor, NAPA, took a hike for another team. I think Kaufman finally got smart and pulled his big-money out and there was……………….nothing…………………..left. For Sale signs went up on Racertainment, and, it was all over but the shoutin’.

Ah, yes, those were the memories of of big-money with little………….direction!

We could all applaud Waltrip’s retirement if he was also retiring from being a Fox commentator but, unfortunately, we will still have to hear his mouth for a long, long, long, long time.

ddsbstrb
Reply to  Bill B

Maybe both Waltrip’s need to retire from NASCAR? I look so forward to when NBC takes over the races, except, for the Toyota Truck Series. You might know if it is……….Toyota………..there just has to be either Waltrip shillin’ for the imports on a continual basis. So sad. Makes MRN look pretty good, doesn’t it Bill B?

Bill B
Reply to  ddsbstrb

Oh yeah. I would love for the tv broadcast to just synch up with the MRN feed and that would be the audio.

It would be nice if Mikey got a full time ride until July. Then the only time we would have to listen to his big mouth would be when he did the pre race walk of shame.