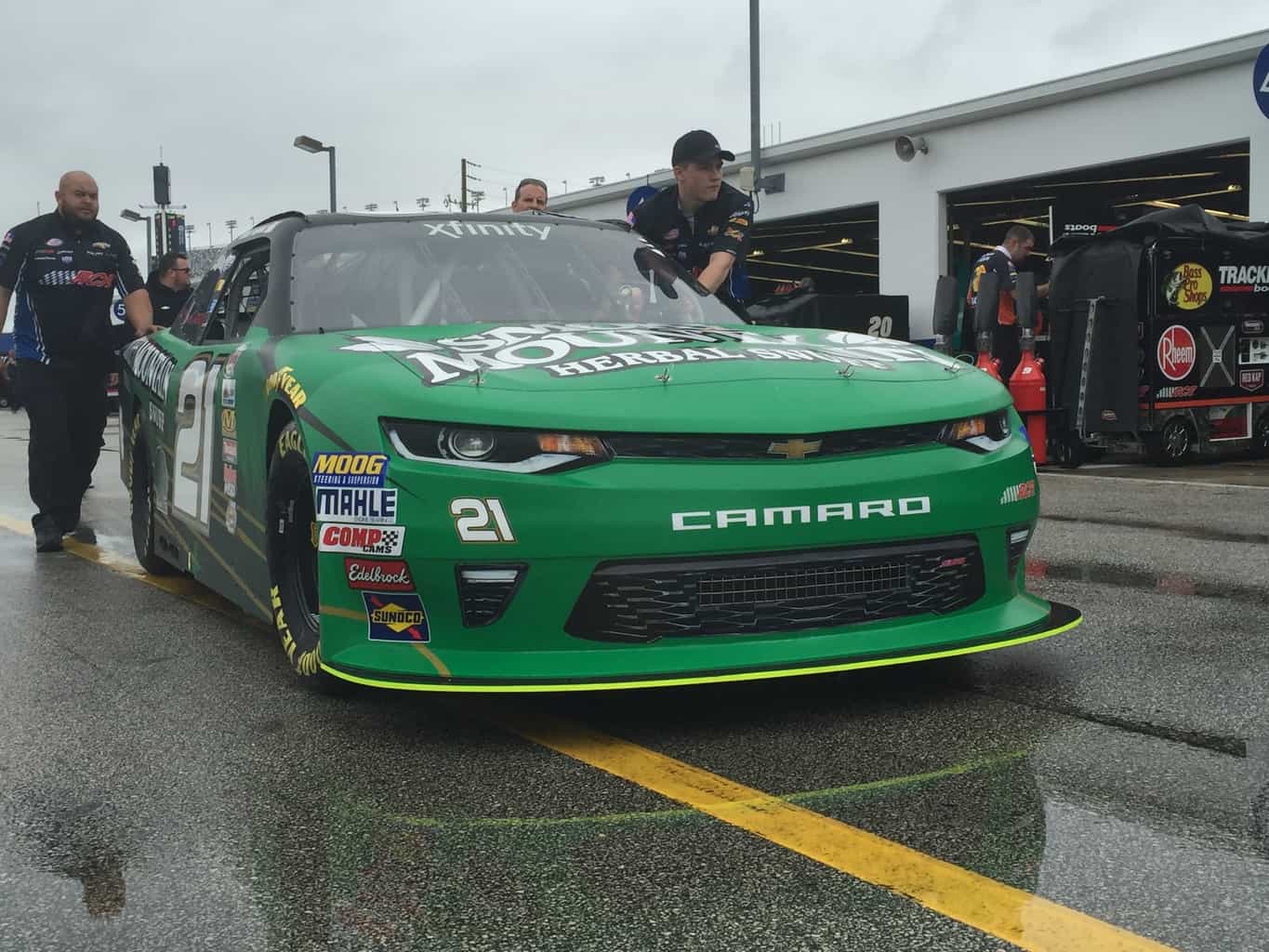 2017 is all about hitting the marks on a new playing field for NASCAR XFINITY Series rookie Daniel Hemric. After two full-time seasons in the Camping World Truck Series, he graduated to the sport’s second-tier division with high expectations thanks to a high level of consistency on the racetrack.

Hemric, 26, is competing with Richard Childress Racing full-time this year, restarting the team’s No. 21 car. The young gun got married to fellow racer Kenzie Ruston over the offseason, and now, he is ready to conquer his next challenge — getting to Victory Lane in the XFINITY Series.

The former Late Model standout is determined to succeed in his next venture, attempting to continue the success he had in the Truck Series with NTS Motorsports and Brad Keselowski Racing. Frontstretch spoke to Hemric at Daytona, discussing his new marriage, the opportunity to compete with RCR, his expectations and more.

Joseph Wolkin, Frontstretch.com: You had a busy offseason, especially with getting married. What has married life been like?

Daniel Hemric: It’s been good. My now wife and I have been together for almost eight years. Not a whole lot has changed on the day-to-day stuff, but it’s cool to finally make that commitment and do it the way we were able to do it. It’s cool to finally etch our names together.

It’s crazy to think that – you look at each other – you go, ‘Can you believe we’re actually married?’ We always joked about it prior to us getting married. Now that it’s reality, it’s definitely pretty cool.

Wolkin: When did you two first meet?

Hemric: We met growing up racing Legends cars. I was 18 and she was 17. We were in Monroe, Louisiana for a five-day race weekend. We met there and one thing led to another. We turned it into what’s now our marriage.

Wolkin: Do you feel that your mentality has changed in terms of how you approach racing?

Hemric: Not at all. Kenzie and I both are racers. That’s what we grew up doing, not only before we met, but after we met. Our love for racing has grown as our love for each other has grown. It’s the same expectation and same mindset on the racetrack.

Wolkin: 2016 was strong year for you in the Truck Series. What was the season like for you?

Hemric: It definitely had its ups-and-downs. We definitely ran solid all year, but it was that lingering no win that kind of put a damper on it to end the season and going into the offseason. A couple of minor things went in different directions and we could’ve won five races. We’re trying to hold our hands up high and know that a lot of situations I was put in last season will benefit me moving forward.

Wolkin: You had plenty of those scenarios where you came close but never sealed the deal. Going into this year, how do you take that experience to try to earn your first win?

Hemric: Just trying to diagnose what, as a driver, I could’ve done differently. I just need to try to learn from that and position myself a little differently, and that will benefit me a little more than it did last year. It’s my 21st year of racing this year, so it’s pretty wild to think about and know that there are still positions where you could possibly be better. I’m just happy to have the opportunity to keep going.

Wolkin: How did the opportunity come about to race for RCR?

Hemric: You have to be competitive and keep running up front in order for people to find out who you are. I was fortunate growing up to have the opportunity to make myself known on the short track ranks. When you get to this level, it’s a totally different crowd and audience. Having a few years in truck racing gave me an opportunity to increase [my career] from one situation to an even better situation, and constantly improve on myself and my communication with my team.

As you do that, people start to learn who you are and more people start to pay attention. Fortunately, it helped me end up at Richard Childress Racing. Now, it has all come full circle because I remember growing up racing with Austin [Dillon] and Ty [Dillon] in Bandoleros and Legend cars. I constantly had a good relationship with those guys. It’s not like I’m going to a new race team because I know a lot of these faces from prior years, so it makes it feel like family.

Wolkin: Did you feel like you were under RCR – or any other teams’ – radar at the end of last year?

Hemric: There comes that time when everybody wants to talk and speculate on what’s happening, what’s going on and what you’re going to do next. I knew that if I did what I was supposed to week-in and week-out that it could be a good thing to have to decipher through. As those calls started coming, we went through the negotiation process with several different teams and whatnot. As soon as this opportunity was available, I took it.

Wolkin: What do you feel like you are going to accomplish this year?

It’s going to be important to keep that relationship strong and healthy, especially as we get to the meat of the season. As we do that and the relationships strengthen, it means the on-track stuff becomes a lot easier to communicate between myself and Danny Stockman (crew chief). If we can do that, we’ll find ourselves in contention early in the season here. It’s not only a good opportunity to win the Rookie of the Year championship, but the XFINITY Series championship as well.

Wolkin: You are surrounded by three Cup veterans, each of whom has plenty of XFINITY Series experience. How have you begun to lean on them and pick their brains?

Hemric: I feel like that’s one of the strong points for RCR this year over years past is the depth and amount of teams we have. That all starts with Richard Childress sitting us down as drivers, crew chiefs and higher-up team members of RCR, and knowing that as we go through this process, we have each other to lean on. Richard is a firm believer of making sure we are communicating.