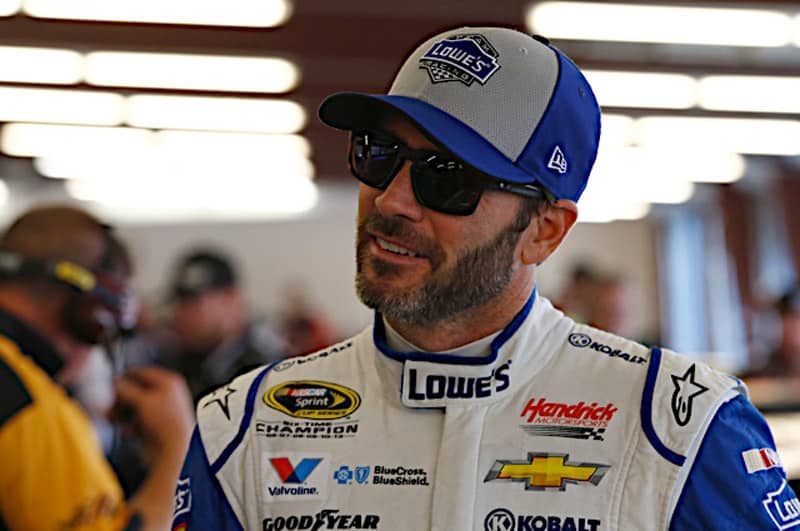 The second stop on the Monster Energy NASCAR Cup Series circuit comes Sunday, at 2:30 p.m. ET at Atlanta Motor Speedway for the Folds of Honor QuikTrip 500.

MENCS teams hit the track Friday at 12 p.m. ET for practice and then 5:45 p.m. ET for Coors Light Pole Qualifying. Here are nine drivers to keep an eye on for your DraftKings lineup as the sport transitions from restrictor plates to intermediate track racing.

Even though the NASCAR season is already underway, there’s still plenty of time to get in on the action at DraftKings. Each week of the NASCAR season you can enter to win BIG cash prizes just by picking a team of 6 drivers. You pick, you play, you win, it’s that simple.
Want to learn more? By signing up at this link right now and making a $5 deposit, you will earn a free entry into one of this weekend’s NASCAR contests. So don’t wait, sign up and WIN on DraftKings today!

Jimmie Johnson won this race last season on great pit strategy by crew chief Chad Knaus. That’s crucial to have in your corner as with the new segment format, pit strategy plays a much more elevated role. Early in the season, taking chances on drivers with aggressive crew chiefs will lead to more laps led and more time spent at the front of the field at crucial parts of the race.

Johnson has the most wins (five) of any active driver at Atlanta Motor Speedway, including the last two races in a row. In those two wins, Johnson had a positive pass differential of +18 and +36. He also has the highest average finishing position (10.7). A 56 percent top-five percentage is incredible, and through 25 races, that is a trustworthy sample size. With five top fives in the last seven races, Johnson is a near lock for your lineup regardless of starting position.

Dale Earnhardt Jr. finished runner up to Johnson in last season’s Atlanta race, and finished third in 2015. Junior is also second behind Johnson in average finish among active drivers (11.6). He looked strong in his return to the Cup Series last week at Daytona, obviously up until he was taken out while leading the race.

Earnhardt Jr. has four top 10s in his last five Atlanta races. In that fifth race, he finished 11th. At a 48.3 percent top-10 finish rate, he will be a solid addition to the lineup, especially if he qualifies outside the top 12.

Chase Elliott was two laps short of winning the Daytona 500 last weekend after running out of gas while leading the pack. He bounced back at Atlanta last season after a disappointing Daytona 500, and it can be expected that he does again.

Elliott started 24th in his first race at Atlanta, and finished eighth. He made his way into the top 15 by lap 40 and never looked back. He ran up front all afternoon long, accumulating +16 position differential points. Add that on top of the 36 points he tallied for his finish and he was one of the highest scorers for the race. Elliott is bound to win this season, and another strong Atlanta showing could lead him to Victory Lane.

Continuing with the theme of drivers who are good historically at Atlanta, Kenseth rounds out the top three in average finish position at 12.2. Since moving to Joe Gibbs Racing in 2013, his’s worst finish is 19th, last season.

That 19th-place finish was marred by controversy after he was black flagged following a pit road penalty, but failed to comply, leading NASCAR officials to stop scoring the team until they served the penalty. Kenseth was running in the top five at the time and had led 47 laps. The two previous races there he saw finishes if second and fifth. That fifth place finish netted him a +31 pass differential. He has led laps in three consecutive Atlanta races, including those 47 last season.

Last season, Newman was running consistently in the top 10 before suffering tire issues, leading to a spin on the frontstretch with under 10 laps to go. He eventually finished 24th, after starting fourth. It’s important when researching drivers to look past the numbers in the box score. What turned out to be a poor finish could have easily been a top 10 had his tire held up.

Since taking over the seat of the No. 31 Caterpillar Chevrolet for Richard Childress Racing, Newman has two top 10s in three races. Newman will be the most intriguing mid-tier driver to look out for during practice and qualifying.

As mentioned above, with bargain tier drivers, look for top-20 finishes and positive position differential points. Paul Menard may not blow anyone away, but he is averaging a 19.8 finish in 15 races at Atlanta. He has three straight top 20s here and five in his last six races, which includes an eighth place finish back in 2013. Another finish inside the top half of the field will earn enough points to justify an add in the lineup.

Almirola is yet another driver who is coming off a surprising top-5 Daytona 500 finish. Though it’s too early to tell, it looks like the move Richard Petty Motorsports made to downsize the team to one car is paying dividends.

Aric Almirola is an obscure name to find in the top-10 in average finish at Atlanta, but in six races, he has managed to hover around the 18th finishing spot. Almirola is currently on a three race top-15 streak at AMS, including a 15th-place finish a season ago. If he qualifies outside the the top 20 Friday night, he would be a must-add to the backend of your lineup.

Allmendinger made his way from nearly dead last to a third-place finish last Sunday at Daytona. He finished 2016 strongly, and will look to continue his momentum into this season.

Allmendinger is quietly one of the more consistent drivers at Atlanta. He ranks sixth among active drivers in average finish position (17.2). While his career best is a seventh-place finish in 2015, he has nine top-20 finishes in his eleven races at Atlanta. Allmendinger is a great value pick for the meat of your lineup.

Ty Dillon notched a top-20 finish while filling in for injured Tony Stewart last season. In his two cup races at Atlanta, Dillon has picked up positive positions differential points (+1, +4). Even though those numbers weren’t as big as some other drivers, it can be tough to find bargain drivers who come out on the positive side.

Ty Dillon may not be driving for Stewart-Haas Racing this year, but the Germain Racing No. 13 GEICO Chevrolet finished 14th in this race a season ago with Casey Mears at the helm.

This helps me make that MONEY BAYBAY!!